At N.H. forum, calls for repeal of national overhaul 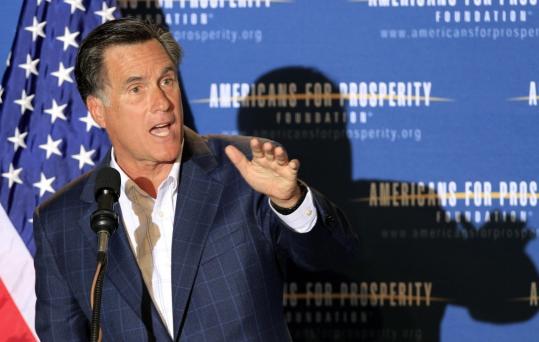 MANCHESTER, N.H. — Mitt Romney offered a tepid defense of the Massachusetts health care law, suggesting to an audience last night at the Granite State’s first forum of the 2012 presidential campaign that he would sign it again if given the chance.

The statement was in response to a question asked of the former Massachusetts governor after he delivered a short address that was equal parts patriotic fervor and attacks on President Obama’s economic policies. For many Republican voters, however, how Romney handles the health care question could determine the success of his expected candidacy.

“I was hoping I’d get that question,’’ Romney joked before launching into the reasons he backed the state efforts to vastly extend health care coverage when he was governor. Massachusetts, he contended, had to do something to control rising health care costs and persuade residents to buy insurance rather than go to emergency rooms for care.

“In my state, we were spending hundreds of millions of dollars giving out free care to people who could take care of themselves,’’ Romney said.

But as he defended the state plan, he again called for repeal of Obama’s national overhaul, saying it unfairly mandates a one-size-fits-all system on each state.

Romney stumbled slightly over his response to one question. Echoing Ronald Reagan’s use of a “Misery Index’’ to criticize Jimmy Carter in the 1980 presidential election, Romney talked about an “Obama Misery Index.’’

“We’re going to have to hang the Obama misery index around his neck,’’ he said. “The fact that you’ve got people in this country really squeezed — with gasoline getting so expensive, commodities getting so expensive; families are having a hard time making ends meet. . . . We’re going to hang him with that, uh, so to speak, metaphorically. You have to be careful these days, I’ve learned that.’’

It was not the first stutter of the campaign this week for Romney. In an op-ed column Monday that criticized the president’s financial priorities, Romney asserted that Obama had engaged “in one of the biggest peace-time spending binges in American history.’’

Many political analysts have pointed out that the lack of foreign policy experience in the present field of prospective candidates — which does not include a sitting or former vice president, president, or senator for the first time in at least a half century — could hinder the GOP in a time of two wars and of protests that threaten to rearrange the political landscape of the Middle East.

For Romney, the forum was the first time he had appeared at the same event as his likely political rivals. It also marked the first significant campaign event in New Hampshire for the GOP presidential contest, which is starting much slower than it did four years ago. None of the major candidates have formally declared their candidacies, although several, including Romney, have formed exploratory committees so they can begin raising money.

The forum was sponsored by the Americans for Prosperity, an organization that has been funded in part by billionaire David Koch, a libertarian-leaning philanthropist and industrialist. The group was one of the top outside sources of funding for Tea Party-backed Republicans in the midterm elections, spending $1.2 million, according to reports from the Federal Election Commission. It spent $5.5 million on ads criticizing Obama’s economic stimulus package.

Koch’s deep-pocketed influence has been a point of attack from Democrats.

“There’s an old saying that you can tell a lot about someone by the company they keep — and Republicans standing shoulder to shoulder with AFP and the Koch brothers proves that they care more about the special interests than the interests of Granite Staters,’’ Holly Shulman, spokeswoman for the state Democratic Party, said yesterday.

In the early jockeying for position in the GOP nationally, no one prospective candidate has emerged from the field. For Granite Staters, however, the case is clear cut: Romney is the front-runner.

Several recent polls show New Hampshire residents would back Romney over the president in the general election, with the latest, from WMUR-TV this week, giving the former Massachusetts governor the edge, 50 percent to 43 percent.

Those results belie a low profile from Romney in New Hampshire, at least in the early going. The forum was only his second public event in the first-primary state this year. Instead, he has banked on his name recognition, his roots in the state (he has a vacation home that has served as a defacto campaign base in the lakes region), and a message that is heavy on fixing a vexing economy. That thrust is particularly attuned to the traditionally fiscally conservative electorate here.

The title of the forum last night fit that theme: “Summit on Spending and Job Creation.’’ Yet, with Romney’s double-digit lead over other potential GOP rivals in most local polls, what the other candidates were seeking to create was some positive buzz that could help them catch up.

“ObamaCare is simply about a man who believes that he is caring for you if he designs a health care system that provides not for people on the margins of society, but for every man and woman in America,’’ Santorum said. “That is not caring. That is trying to manipulate every man and woman to do what you want them to do, and that is not America.’’

Bachmann described the law as a “Frankenstein,’’ then said it had “ugly tentacles.’’

Pawlenty and Santorum, in particular, have been far more aggressive in the early campaign than Romney, signing up staffers, attending house parties, and making frequent trips to the state. Last night, the format of the forum did not allow the candidates to interact with one another, and they generally stayed away from attacking Romney.

Earlier in the day, however, Democrats had no such hesitancy. When the potential candidate used a stop at a gas station in Manchester (paying to fill up a Ford Escape driven by an aide) as a platform to denounce President Obama’s energy policy, state Democrats pounced.

Romney is no friend of the beleaguered driver beset by rising prices at the pump, they contended, pointing to a 2-cent-per-gallon increase in Massachusetts’ gasoline fees implemented in 2003, when Romney was governor. The special fee, assessed on gas stations, funded projects to clean up contamination around underground fuel storage tanks.

The New Hampshire Democratic Party also said it was filing a complaint with the Federal Election Commission alleging that Romney violated campaign finance laws by using large contributions given to state PACs to fund his presidential ambitions.

Romney’s campaign has insisted it followed the letter of election law in using that money and in declaring how it was raised and where it went. No nonpartisan group has accused the campaign of wrongdoing.

The early attacks on Romney show the importance Democrats place on New Hampshire, which Obama carried in 2008.

With such charges and countercharges, the pitches at the forum, and the sight of candidates criss-crossing the southern part of the state, New Hampshire Republicans had the feel, at least for a day, of once again being an early political bellwether for the nation. For some here, it was about time, given the slow start of the campaign.

“I think you’ll see the tone and tenor change in the next few months,’’ Representative Frank Guinta, a New Hampshire Republican who surged to office on a wave of Tea Party support, said in an interview. “You’re going to see real retail politics in this state, and you’re going to see very tough, pointed questions to these prospective candidates. New Hampshire is going to expect real answers from everybody.’’