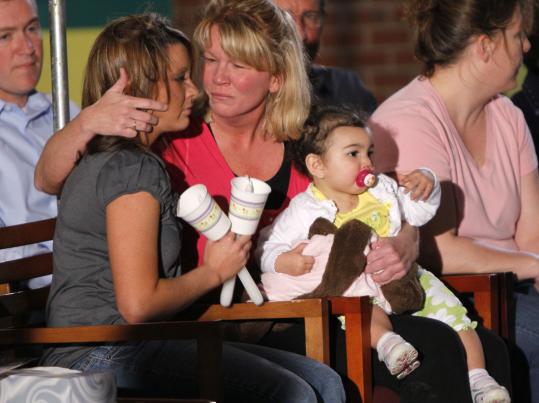 New Hampshire investigators declined to release the preliminary results of an autopsy performed yesterday on a young mother from Maine whose body was found in a pond in Conway, N.H.

At a press conference yesterday in Conway, Assistant Attorney General Jane Young said it could take up to eight weeks before authorities release the cause and manner of death of Krista Dittmeyer.

The 20-year-old Portland woman disappeared early Saturday, and her car was found in the parking lot of the Cranmore Mountain Resort, with its lights on and her 14-month-old daughter in the back seat.

“At this juncture, the cause and the manner of death remain pending, due to toxicology reports,’’ Young said. “The case remains active and ongoing.’’

She declined to comment on what, if any, evidence investigators have found or whether they have identified any suspects.

She asked for any witnesses to come forward and continued to call the death suspicious. “We need all the assistance we can get,’’ she said.

Friends of the Dittmeyer family organized a candlelight memorial service last night at an elementary school in Bridgton, Maine, where the young mother grew up.

Sandy Pasquale, whose daughter was close with Dittmeyer, described her in a phone interview as “warm, independent, and a hard worker.’’

Since graduating from high school, Dittmeyer has worked as a baby sitter, a nanny, and as a waitress, she said.

“She had a good heart and liked to have fun,’’ Pasquale said. “She was proud to stand on her two feet and had a special connection with children. She was a very hard worker and very good girl, always with a smile on her face. She was always very respectful.’’

Pasquale said neither neighbors nor relatives would rest until they find out what happened. Relatives did not return calls for comment. “The dust won’t settle until we find out who did this,’’ she said. “We’re not going to drop this until it’s done.’’

Dittmeyer was last seen Friday. Her mother is caring for her toddler, Aliyah, in Bridgton, which is about 25 miles from Conway.

Dittmeyer moved to Portland shortly after her 2008 high school graduation and had been working most recently as a waitress at a South Portland restaurant, said her older sister, Kayla, who lives in Colorado.

Dittmeyer’s mother, LaNell Shackley, has said she did not believe anyone had a vendetta against her.

“She’s very lovable, very outgoing,’’ the mother told NBC’s “Today’’ show. “I’ve asked all of her friends, and they tell me the same thing. They don’t know who would want to do something to hurt her.’’

The man identified as the toddler’s father, Kyle Acker, was in prison in Maine at the time of the disappearance, although investigators have not ruled him out as a suspect. Police said he and Dittmeyer were living together in South Portland when he was arrested last year on drug charges.

WMWV-FM reported yesterday that a Conway police officer questioned two men who were walking on a road near the ski area just before midnight Tuesday. The men, one of whom had the same last name as the baby’s father, told police they were friends of Dittmeyer’s, went to Cranmore to look for her, and found one of her flip-flops.

Material from the Associated Press was used in this report. David Abel can be reached at dabel@globe.com.