Lawmakers in N.H. push for repeal of gay marriage 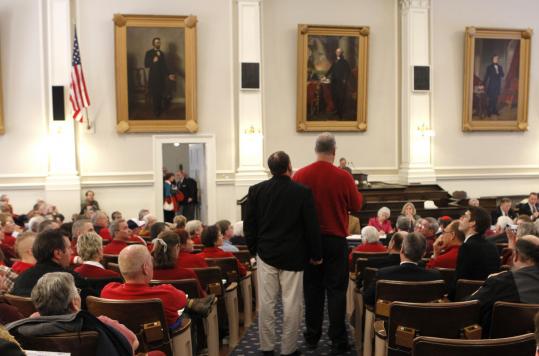 CONCORD, N.H. — Two years after New Hampshire and Maine capped a wave of New England states that legalized same-sex marriage, the foothold many advocates believed they had established in the region looks less secure.

Maine voters repealed that state’s law months after lawmakers approved it in 2009. An effort in Rhode Island to approve gay marriage faces an uncertain future, despite a newly elected gay speaker of the house and a governor who support the measure.

Now, conservatives in the Republican-controlled State House in New Hampshire are looking to roll back the 2009 legislative vote. Yesterday, legislators heard testimony at a heavily attended hearing on two bills that would repeal same-sex marriage. The sponsors of the bills recommended that the House not act on them until next year, citing the need to focus on the economy. But Republican House leaders promised their support for repeal, and conservatives vowed to make gay marriage a major issue in the state’s first-in-the-nation primary.

“We will have a pledge sheet for candidates saying whether they support marriage being only between a man and a woman,’’ said Kevin Smith, executive director of Cornerstone Action, a conservative think tank based in New Hampshire. “We will ask all the candidates to sign that pledge, and I think it will most certainly make news if some of them won’t.’’

Some opponents said that Massachusetts, which in 2004 became the first state in the country to legalize same-sex marriage, stands as an example of the problems gay marriage can create.

Same-sex marriage “has deeply impacted what is taught in schools’’ in Massachusetts, said state Senator Fenton Groen, a Republican.

The hearing went late into the day, with hundreds set to testify. Some read Bible passages or poetry, amid occasional eruptions of applause and hoots. Supporters of gay marriage far outnumbered opponents, but opponents said they were intent in overturning the law.

If New Hampshire repeals its law, at least three New England states would remain with same-sex marriage laws: Massachusetts, Connecticut, and Vermont. Elsewhere in the nation, only Iowa and the District of Columbia permit gay marriage. In California, supporters of same-sex marriage are legally challenging Proposition 8, which banned it.

Both sides say that this year offers potential for a shake-up in the gay marriage equation. Maryland legislators, along with Rhode Island lawmakers, are taking up bills that would legalize same-sex marriage. Governor Andrew Cuomo of New York disclosed plans to push to legalize same-sex marriage. Opponents of gay marriage are seeking constitutional bans in a number of states, including Indiana, Iowa, and West Virginia.

In New Hampshire, a shift in the electoral map reopened the gay marriage question. In 2009, when the same-sex marriage bill passed, Democrats controlled both houses of the Legislature, and the centrist Democratic governor, John Lynch, signed it.

Lynch is still governor and has vowed to veto any repeal measure, but Republicans hold legislative supermajorities. Many newly elected Republicans are considered more conservative than the Democrats or Republicans they ousted in November.

Yet a poll last week by the University of New Hampshire Survey Center found that opponents of repealing gay marriage outnumber supporters. According to the survey, 29 percent of adults in the state support repeal of the same-sex marriage law, 51 percent strongly oppose repeal, 11 percent somewhat oppose repeal, and 9 percent are neutral or say they do not know.

“These numbers are out of the ballpark,’’ said Mo Baxley, executive director of the New Hampshire Freedom to Marry Coalition. “They show that this is a popular law, and people are pretty proud of it.’’

“The poll reflects the fact that the people of New Hampshire are concerned about our fiscal issues, and that’s where their focus is at,’’ said the House Republican leader, D.J. Bettencourt.

Bettencourt said he favored delaying a vote on same-sex marriage for a year to permit his party’s members to focus on the economy.

Other conservatives favored taking up gay marriage this year.

“Let’s vote on it,’’ said Andrew Hemingway, chairman of the Republican Liberty Caucus of New Hampshire, a group affiliated with the Tea Party movement. “It’s a good time to bring it to the floor.’’

Gay marriage supporters preferred waiting on a vote because they said the longer that same-sex marriage is permitted, the less resistance there will be.

“Every day that goes by more people support [gay] marriage and fewer and fewer people oppose it,’’ said Terie Norelli, the Democratic House leader. “People have discovered that the sky hasn’t fallen.’’

It was not clear that opponents have the votes to repeal same-sex marriage, which would have to overcome Lynch’s veto. While the legislature is dominated by Republicans, a number of GOP lawmakers are freshmen whose positions on gay marriage are not known. Also, many of the new Republicans are Tea Party-affiliated and are more focused on budget issues than social ones.

“This isn’t Tea Party groups’ number one issue,’’ said Smith, of Cornerstone Action. “There are many who feel very strongly that we shouldn’t have gay marriage, and there are others who take a more libertarian approach.’’

Both sides are ramping up for a battle. Smith said his group encouraged its supporters to turn out for yesterday’s hearing.

Gay marriage supporters announced a multiyear effort this week to sustain same-sex marriage, with Lew Feldstein, former president of the New Hampshire Charitable Foundation, named as cochairman of the effort.

Repeal of gay marriage “does not reflect the people of New Hampshire, and we will make everyone aware of that,’’ said Baxley, of the New Hampshire Freedom to Marry Coalition.

Yesterday’s hearing drew residents from across the state, with supporters saying the hearing was crucial because a right had been given and was now under threat.

“It’s like saying you matter and then saying you don’t matter,’’ said Wendy Audet, 49, a mail carrier from Manchester who plans to marry her partner of two years.

Tara Mahady-Coltey, 40, of Bow, a fund-raiser who is married to her partner of 13 years, said: “There’s this mama bear protectiveness that comes up in you that says: No one is going to take this away from me or my family.’’

Opponents said revisiting the issue is crucial because of how much same-sex marriage is affecting New Hampshire.

Representative Warren Groen, a Republican, said a gay couple threatened to sue his church when it refused to marry them.

“It is affecting my state and its culture,’’ Groen said.