Masterpiece yields quite a markup 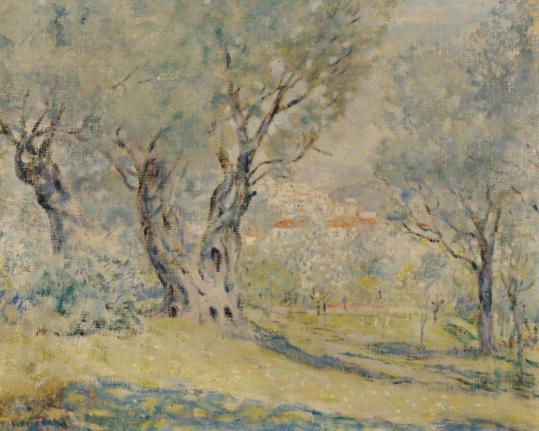 It is the holy grail of yard sale junkies: The dusty painting, forgotten in the attic, that turns out to be a long-lost masterpiece.

Such finds are rarer than ever, according to experts. In this age of “Antiques Roadshow,’’ the popular PBS series, the ranks of sharp-eyed treasure hunters have swelled. But for one longtime New Hampshire “picker,’’ as serious scavengers of yard sales and flea markets are known in the business, a visit to a yard sale in the Granite State last summer promises to pay off handsomely this week.

The man, who has scoured for gems in other people’s junk for 20 years, had a hunch about a painting at the yard sale, an Impressionistic landscape of a grove of olive trees. The surface was grimy in spots and marred by minor rippling and crackling. But the brushstrokes were so fluid, the style so masterful, that the price — less than $100 — seemed like a gamble worth taking.

He gambled — and won the yard sale lottery. The painting, confirmed by experts as a previously unknown work by American Impressionist Frederick Carl Frieseke, dates to around 1920 and is expected to sell at auction today for $50,000 to $70,000.

“When someone calls about a yard sale find, we want it to be true, but let’s be honest, it generally doesn’t pan out,’’ said Robin Starr, director of American and European paintings and prints at Skinner Inc., the Boston auction house that will sell the Frieseke (pronounced “free-zik-ah’’) as part of its quarterly offering of paintings and prints. “To have it happen on this scale is very unusual. . . . When it does, we’re almost as excited as they are.’’

The treasure hunter contacted Skinner last fall and brought the painting to Starr, who quickly figured out that it was valuable. The signature, in teal blue paint, seemed to read “F.C. Frieseke’’ and the subject matter, a scene in southern France, matched a quick check of the painter’s biography. Fifteen minutes after seeing the painting, Starr made a deal to research its origins for the owner, and, if her instincts were confirmed, to have Skinner sell it for him. (The auction house will keep a portion of the profits.)

Starr needed a specialist to be certain. She contacted Nicholas Kilmer, the artist’s grandson, who lives in Cambridge. He studied an e-mailed photograph of the painting and recognized the subject: a scene in the French town of Cagnes, on the Mediterranean Sea, that Frieseke had depicted in other works. When auction house representatives took the painting to him, he had no doubt that it was his grandfather’s work.

“I can’t say I spent a lot of time hemming and hawing,’’ said Kilmer. “It screams what it is.’’

The delicate quality of the brushwork, in keeping with the artist’s style at the time, was a clearer confirmation than the signature, which can be forged, he said. And while the discovery was surprising, it was not entirely shocking, given the history of Frieseke’s body of work.

The artist, born in Michigan in 1874, studied at the Art Institute of Chicago and the Art Students League in New York. He moved to France in his early 20s and spent the rest of his life there. He was one of Monet’s neighbors in Giverny, but Renoir was a greater influence on his work, which often featured women with parasols in sunlit gardens. He eventually settled in Normandy but spent several winters in Cagnes.

The painter died in 1939. With World War II looming, his widow took what she could from his studio and left for the United States, where she settled with her daughter, Kilmer’s mother, in Virginia. German forces occupied the house in Normandy during the war, and it sat empty for the next quarter-century, said Kilmer. When his mother finally returned there, in the 1960s, she found that neighbors in the village had cared for some of the painter’s works for decades.

“People kept turning up with books, a tea set, paintings,’’ he said. “In some cases the contents were lost, but much of it reappeared.’’

The fractured history has added uncertainty to any accounting of Frieseke’s work. Kilmer has spent years researching his grandfather’s career and compiling a catalog raisonné: a complete chronological record of his paintings.

An artist and writer who has penned a series of art-themed mystery novels, Kilmer wishes he could solve the mystery of the painting at the yard sale. But he accepts that its secrets will probably stay locked. The buyer who discovered it asked the auction house to not identify him, and Kilmer doesn’t even know what town the yard sale took place in.

“I would love to know what happened from 1920 to 2011, to get it from Cagnes to New Hampshire,’’ he said. “It’s part of the identity of the work, like the bloodline of a horse, that you want to go back as many generations as possible.’’

Jenna Russell can be reached at jrussell at globe.com.