N.H. town fights for one of its own 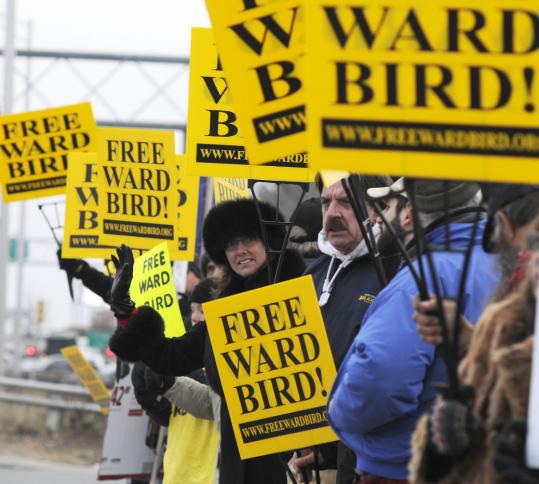 More than 100 supporters of Ward Bird (in photo right) held a rolling rally Sunday that ended in Manchester, N.H. Many of them say his punishment does not fit the crime. (Mark Wilson for The Boston Globe)
By Peter May Globe Correspondent / December 25, 2010

MOULTONBOROUGH, N.H. — Cars and pickups fill the parking lot and spill onto the street near the community center on a rainy December evening. Inside, a local band, Jam Sandwich, wraps up a set with Lynyrd Skynyrd’s “Free Bird,’’ while folks sip beer, watch football, and enjoy a barbecue buffet, complete with a roasted pig.

The atmosphere is upbeat. The occasion is somber. More than 100 residents of this rural town in New Hampshire’s Lakes Region have come to support a popular native son, Ward Bird.

Bird, however, a 49-year-old family farmer, is 20 miles away. He sits in the Carroll County House of Corrections, jailed since November for an offense he insists he did not commit. His case has galvanized the region, with widespread sentiment that the punishment does not fit the crime — if the crime even happened.

Three and a half years ago, in a profanity-laced tirade, Bird warned a stranger who said she was lost to get off his land, 60 mountainside acres that are off the grid and plastered with “No Trespassing,’’ “Keep Out,’’ and “Private Property’’ signs. After his arrest, Christine Harris, then of Salem, N.H., testified that Bird waved a gun at her. He said the Sig-Sauer .45-caliber handgun remained in his holster. There were no witnesses to the confrontation at the home Bird shares with his wife, Virginia, and their four children.

Bird was initially charged with felony reckless conduct. But after a mistrial in 2007, Carroll County District Attorney Robin Gordon added a charge of felony criminal threatening, a move Bird supporters say smacked of piling on. After a second three-day trial in 2008, Bird was acquitted of reckless conduct but convicted of the criminal threatening charge, which carries a mandatory term of three to six years. He was incarcerated in November after the New Hampshire Supreme Court upheld his conviction.

The case has energized the Lakes Region around two values its people hold dear — gun rights and property rights — and educated them about a third, less familiar, issue: mandatory sentencing. For all the skepticism over whether Bird actually waved his gun, his supporters are outraged at the severity of his sentence.

As the case has dragged out, Bird has become a modern-day folk hero.

“This is not about just one man. This is about all of us,’’ said Sonia Voegtlin, a machinist from Sandwich, N.H., who has never met Bird and had never protested before joining a pro-Bird rally at a Manchester mall last weekend.

Supporters make their case Since Bird was incarcerated, his supporters have staged rallies every weekend, standing at crowded intersections along Route 25 with “Free Ward Bird’’ posters. Businesses along the road have posted signs of support (one reads: “Your wife called. She said to free Ward Bird’’) and sell T-shirts, buttons, and wristbands.

Those who know Bird talk of a man who was painstakingly careful with guns, notwithstanding a $480 fine in 2002 for target shooting in a residential area. They describe a lifelong resident who led a Boy Scout troop, ran Picnic Rock Farms in Meredith, worshiped at the local Congregational church, and helped refurbish historic buildings in town.

His daughter Emily helped launch a Facebook page that resulted in more than 1,500 messages of support from across the country and radio interviews as far away as Montana and Oregon. A website, freewardbird.org, keeps supporters up to date on his case and apprised of events, such as last weekend’s. A caravan of more than 30 cars, sport utility vehicles, and pickup trucks left the Irving station in Moultonborough and rendezvoused near a Manchester mall filled with holiday shoppers. They held signs with slogans such as, “Good Man, Bad Law, Ugly Sentence.’’

From Bird’s point of view, though, his case is also a matter of principle.

“The gun rights and property rights are important — this touches on that, to be sure,’’ Bird said in a phone interview. “But it’s about the truth. It’s about how someone can make a claim against you and the powers that be can take it at face value when she is a proven liar. This could happen to anybody, not just me. And people are awakening to that.’’

Decisions questioned Bird’s supporters have a lot of questions about his case. They want to know why police didn’t charge Harris with trespassing when she refused to leave his property. They want to know why police believed her version when she had had her own run-ins with the law — including a 2002 felony conviction for writing a bad check and, after the incident at Bird’s home, a conviction on five counts of misdemeanor animal cruelty. (Harris, 57, who appealed the animal cruelty conviction and is scheduled to go to trial in January, has moved to South Carolina and could not be reached for comment.)

Gordon, the district attorney, refused to talk to the Globe about the case. But in a recent television interview she said Bird’s actions warranted the charges. “By him brandishing and waving a gun around at her, she was put in fear of imminent bodily harm,’’ she said.

Last month, facing her first serious election challenge since 1998, Gordon lost to Republican Thomas E. Dewhurst III. Moultonborough voted nearly 2 to 1 against her. “We got her out of there,’’ said Robert Holopainen, a Bird supporter who helps run the Irving service station. “That woman didn’t like two things: men and guns.’’

Bird chose not to testify in his defense, a decision he said he now regrets. His attorneys did not call a single defense witness, banking that the jury would not believe Harris.

No one but Bird and Harris know exactly what happened that March afternoon on Yukon Trail. But even the sentencing judge argued that the punishment does not fit the crime.

“If I had sentencing discretion, an appropriate sentence would be 12 months in the Carroll County House of Corrections,’’ Judge Steven Houran said in court, “with immediate work release, and with the balance after six months to be served on home confinement, with electronic monitoring and then after that a period of two years’ probation.’’

A community divided The fallout from the Bird case is visible all over this town on the north shore of Lake Winnipesaukee, a popular summer tourist destination with roughly 5,000 year-round residents. Scott Kinmond, the police chief at the time of the incident, said he sympathizes with the Birds but regrets that the police department has been tarred by the case.

“They felt by arresting him that we thought Ward Bird was guilty,’’ Kinmond said. “The community is divided on this. I’ve known him for 20 years. He’s a good guy in the community. Our daughters worked together at Skelly’s [a local convenience store]. His kids feel they don’t have their dad because of the actions we took. But we did our job.’’

This all could have been avoided if Bird had taken a plea deal that would have reduced the initial charge to a misdemeanor and eliminated the possibility of incarceration. Presented with that option in the lobby of the courthouse, Bird’s wife said her husband pointed to a nearby American flag and said, “I am a citizen of the United States. I have rights. I am not pleading.’’

So Bird sits in jail, inundated with letters from his friends and supporters. He is allowed visitors for one hour, twice a week. One visit is reserved for Emily, a freshman at the University of New Hampshire. The other is for his wife and the couple’s three other children, ages 16, 13, and 10.

“If I had taken that plea, none of this would be happening, and it is important to get the word out,’’ Bird said in the phone interview. “It was a tough decision to make, but I was offered the opportunity to lie, and I wouldn’t do it.’’

Seeking a pardon hearing Bird’s lawyers have filed the necessary paperwork for a pardon hearing. On Dec. 17, the incoming speaker of New Hampshire’s House of Representatives presented Governor John Lynch with a letter — signed by 117 members of the House — requesting Bird’s release by Christmas. That didn’t happen.

The attorney general’s office, which investigates pardon requests, said it hopes to have its work done and presented to the governor and Executive Council by March. They will decide whether Bird’s case warrants a hearing.

Recent history is not in his favor. The attorney general’s office said it receives roughly 20 pardon requests a year. Since Lynch took office in 2005, only two pardon hearings have been granted. In the first, the pardon was denied. In the second, the request was tabled.

“Yes, it’s a flawed system,’’ Bird said. “But it’s the only one we have. We need to make changes, but there is no solid answer other than it’s what we have and we are all in this together.’’

Peter May can be reached at pmay4369@yahoo.com.