Testifies as part of plea bargain 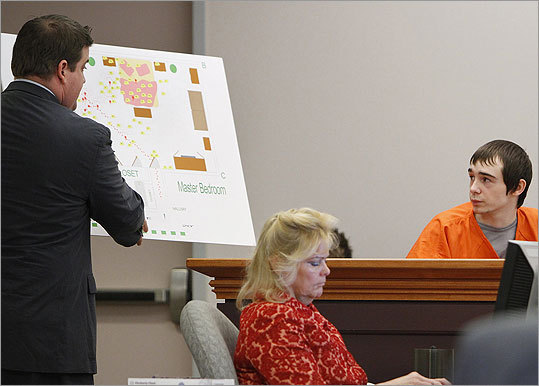 — A teenager who was in the room during a deadly home invasion acknowledged yesterday that he wrote a poem saying he liked to cut up women with an ax but insisted it was two codefendants, not him, who hacked the victims with a machete and knife.

Despite a withering cross-examination, William Marks, 19, maintained at Steven Spader’s trial that Spader attacked Kimberly Cates and her 11-year-old daughter, Jaimie, with a machete in their Mont Vernon home in October 2009. Marks said Christopher Gribble used a knife to slash both victims.

Spader, 18, has pleaded not guilty to murder and other charges. Gribble is scheduled to go on trial in February. Both face the possibility of life in prison if convicted.

Marks, testifying as part of a plea bargain, said he did not lay a hand on either victim. Kimberly Cates was killed, and Jaimie was severely injured.

Defense attorney Jonathan Cohen accused Marks of lying when he said he did not attack the pair. Marks denied it and reiterated that he witnessed the attacks but did not take part.

Cohen quoted a poem that Marks acknowledged writing in prison two months ago that included the line, “I always have an ax by my side, looking for my next homicide,’’ along with a reference to cutting up women.

Marks testified that he handled an ax that was in Gribble’s car on the way to the Cates home the night of the attacks and admitted saying he wanted to plant it in someone’s head.

Marks and other witnesses testified that he was lowered into the home through a basement window because he was the smallest of the four intruders. Marks said he is 5 foot 3 and weighed 97 pounds at the time.

He said he thought he was locked in the basement and the others had to break in by moving an air-conditioning unit.

Cohen emphasized that Marks was alone in the house with the victims for nearly half an hour.

“You were lying about not attacking Kimberly Cates,’’ Cohen said, to which Marks replied, “No.’’

Prosecutor Jeffery Strelzin asked Marks point-blank, “Did you chop up anyone in the Cates home?’’

Marks said he did not.

Marks admitted that he lied to police or told them what he thought they wanted to hear during lengthy interviews in October and December 2009. He also said the home invasion had nothing to do with Disciples of Destruction, a brotherhood Spader formed.

Prosecutors have suggested the crime was a rite of initiation into the group.

Marks agreed to plead guilty to conspiracy to commit murder and burglary and to being an accomplice to first-degree assault in exchange for a 30-to-60-year prison sentence.

Another codefendant, Quinn Glover, pleaded guilty to robbery, burglary, and conspiracy in exchange for a 20-to-40-year sentence. Glover testified against Spader last week.