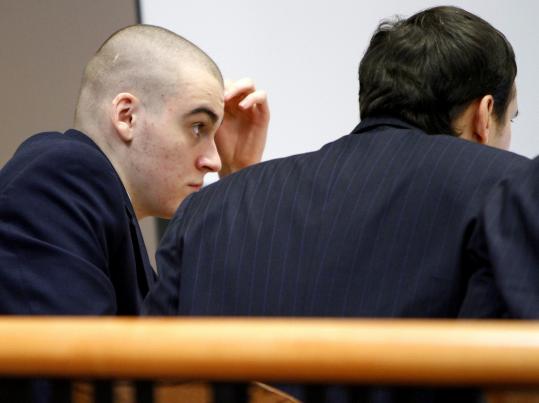 Steven Spader listened to testimony during his trial in Hillsborough County Superior Court in Nashua. He is charged in the attack on Kimberly Cates and her daughter, Jaimie. (Don Himsel/ Associated Press/ Pool)
By Brian MacQuarrie Globe Staff / November 2, 2010

NASHUA — State Police crime analysts testified yesterday that no fingerprints or bloody markings found last year at a Mont Vernon home can be linked to the four teenagers charged in a random attack that left a nurse dead and her 11-year-old daughter severely wounded.

The analysts said they examined markings from the bedroom, the kitchen, and a wall, as well as fingerprints on the garage door and a basement window that had been broken to allow the assailants to enter.

Only two of eight fingerprints on the window could be identified, said analyst Emily Rice, and those belonged to Jaimie Cates, who played dead while Steven Spader allegedly hacked at her and her mother, Kimberly, with a machete.

Rice also testified that no fingerprints could be found on the machete, allegedly wielded by Spader, 18, of Brookline, N.H., who is the first suspect to face trial in the October 2009 crime.

In addition, Rice said, no prints were found on clothing Spader and the other assailants allegedly tossed into the Nashua River after the killing.

Prosecutors have said the machete and other weapons were cleaned with chemicals. Rice added that river water could have washed prints from the discarded clothing.

Another State Police analyst, Timothy Jackson, testified that none of the bloody impressions found on the floor of the master bedroom could be matched with any of the four pairs of shoes recovered from the river. DNA testing of samples taken from the home and clothing also could not be linked conclusively to any of the four suspects, analysts said.

Their testimony followed questioning of State Police Detective Steven Tarr, who said he had recovered clothing and jewelry boxes from the Nashua River the day after the crime.

The clothing included a sweatshirt that contained the following writing: “This is Steve’s sweatshirt,’’ and “Steve, who is awesome.’’

Tarr said he was led to the river by Autumn Savoy, a friend of Spader’s who has told prosecutors he disposed of the items on Spader’s orders.

The evidence, which was visible from the riverbank, had not traveled far in the slow-moving current and had stopped near part of a fallen tree.

The detective said he also recovered two pairs of pants, adjustable side panels from an air-conditioning unit, and identification from a wallet belonging to David Cates, Kimberly’s husband, who had been away on business when the crime occurred.

Quinn Glover, then 17, of Amherst, who took part in the home invasion, testified last week that Christopher Gribble, then 19 of Brookline, N.H., cut away panels on an air conditioning unit at the home to gain access to the basement.

Savoy, who did not participate in the attack but provided an alibi for the accused, initially told Tarr that Spader and Gribble had been at his home when the crime occurred, the detective said.

Savoy, then 19, of Hollis, changed his account after further questioning. He has pleaded guilty in exchange for a maximum 12-year sentence on lesser charges.