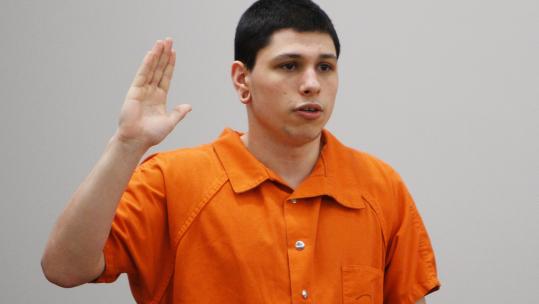 NASHUA — A Hollis man who provided an alibi for those accused in the deadly 2009 assault on a Mont Vernon home testified yesterday that the alleged ringleader threatened to kill him if he told anyone about the murder.

Autumn Savoy, 21, said that Steven Spader, then 17, threatened him many times in the first days after the attack in which a nurse was hacked to death with a machete and her 11-year-old daughter was badly maimed.

Spader said, “I love you like a brother, but if you tell anyone, I’ll [expletive] kill you,’’ Savoy testified.

The threats were frightening and effective, said Savoy, who was not part of the alleged attack by four teenagers. Spader had previously told him, Savoy said, that he had killed 28 people, joined drive-by shootings with a Crips gang chapter in Lowell, Mass., and dumped the bodies in a quarry in Milford, N.H.

When asked yesterday about Spader’s alleged statements, Lowell police Captain Randall Humphrey said that he had “no personal knowledge of anything like that.’’

Like previous witnesses, Savoy said that Spader seemed energized by the killings.

When they met in Savoy’s driveway two hours after the 4 a.m. attack, Spader let him handle the machete that allegedly had been used to kill Kimberly Cates, 42, and wound her daughter, Jaimie. Kimberly’s husband, David, had been away on business at the time.

On the fourth day of testimony at Hillsborough County Superior Court, new evidence emerged of the callousness of the crime. According to Savoy, the defendant said, “I’m bored,’’ as he hacked Jaimie’s face with a machete as she pretended to be dead.

Hours later, after buying energy drinks and other snacks at a nearby convenience store, the pair and another alleged accomplice, Christopher Gribble, watched “Dexter,’’ a television show about a serial killer. Spader “was rambunctious and all excited about events during the show,’’ Savoy said.

When they learned from news reports that Jaimie had survived, Savoy said, Spader lambasted Gribble, then 19, for failing to kill the girl. According to the witness, Spader said: “You’re an idiot. You can’t even kill a fifth-grader.’’

The teasing continued, Savoy said, and Gribble “became depressed because he really wanted to kill someone.’’ Savoy added another taunt by shoving a game, “Are You Smarter than a 5th Grader?’’ in Gribble’s face.

Savoy, who pleaded guilty to lesser charges in the crime, has agreed to testify for the prosecution and faces up to 12 years in prison. Savoy initially told police that Spader and Gribble had stayed at his house on the night of the assault.

After his testimony, which Savoy provided in an orange prison jumpsuit, his mother left the courtroom near tears. “My heart goes out to the Cates family,’’ said the woman, who declined to give her first name.

The coverup that included Savoy unraveled quickly as word of the crime began to spread among acquaintances. As a result, police soon focused on the group they charged in the attack: Spader and Gribble, both of Brookline, N.H., and Quinn Glover, then 17, and William Marks, then 18, both of Amherst. Glover and Marks, both of whom were charged with lesser crimes, agreed to cooperate with the prosecution.

Earlier, another friend of Spader’s testified that the accused killer had told him he was responsible for the murder. “He said he had hacked her up and stolen her jewelry,’’ said Eldon Spikes, 20, of Amherst. “They also were planning to do it again.’’

Defense attorneys spent much of the day attempting to damage the credibility of the witnesses, citing discrepancies between their testimony to the jury and previous sworn statements to prosecutors. Spikes had previously told prosecutors he traveled to a mall in Manchester with Spader and Gribble after the crime, instead of a Nashua shopping center that he mentioned when he testified to the jury.

Under questioning from defense attorney Jonathan Cohen, Spikes conceded that he had ingested a dozen doses of a powerful drug the night of the crime and that he often failed to remember details when he was under the influence.