How do you sell a Granite State?

Maine has the lobster Vermont has maple syrup 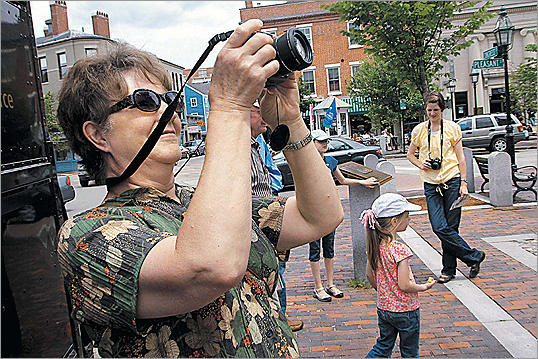 (Bill Greene/Globe Staff) Shauna Killpack, visiting New Hampshire from Utah, drew a blank when it came to finding a superlative to describe the Granite State. "No offense,’’ the homemaker said. ‘‘I have no idea."
By Sarah Schweitzer Globe Staff / June 13, 2010

PORTSMOUTH, N.H. — When the Killpacks of Salt Lake City were planning a first trip to New England, the allure of Maine was obvious.

But last week, as the husband and wife stopped in this coastal city on their way to Maine (to tour lighthouses and feast on lobster), they drew a blank on the superlatives of New Hampshire.

Responses like that vex New Hampshire officials, who long have looked with envy upon their neighboring states’ more easily identifiable traits. Now, New Hampshire is embarking on an effort to shore up its image in the eyes of the nation. It has hired an Orlando, Fla., firm that specializes in researching the psyche of a state to retool, in the parlance of the industry, the brand. Results of the study by the marketing and advertising firm Ypartnership are expected by the end of summer, and officials hope to roll out a new campaign at the start of the year.

“The biggest issue we face in New Hampshire, let’s face it: You look at Vermont and people tend to think about cows and maybe maple syrup, then you look at Maine and think of the coast,’’ said Mark Okrant, director of the Institute for New Hampshire Studies, where he coordinates tourism research for the state. “New Hampshire is kind of a weird little place because it has so much variety and not one of those things is a standout.’’

States have long cast about for slogans and images to lure tourists and dollars to their states. Some have promoted exceptional natural features. Think Florida beaches or South Dakota’s Mount Rushmore. Others have relied on messages that seek to tap the state’s zeitgeist — “I Love New York’’ and “Virginia Is for Lovers,’’ to name two. New Hampshire gets the media spotlight every four years with its first-in-the-nation election primary. It once had the Old Man in the Mountain, the iconic rock profile depicted on license plates, stamps, and New Hampshire’s statehood quarter that collapsed in 2003. Despite all of that, specialists say, the state has resisted easy definition.

For one, it offers a lot of the same things that other New England states offer — history, mountains, coastline, and quaint downtowns — making it hard to claim anything of its own, they said. New Hampshire also tends to have strong regional and town affiliations that trump a larger state affiliation, making the creation of a unified message difficult.

“New Hampshire has it all — we really do. We have lakes and mountains and the ocean,’’ said Alice DeSouza, director of the Division of Travel and Tourism Development. “But to say “New Hampshire we have it all’’ — does that tell you what New Hampshire is?’’

The message effort is not helped by that bold yet prickly cri de coeur, printed on every New Hampshire license plate: Live Free or Die.

“We’re not touching that,’’ DeSouza said, who noted that research shows that focus groups respond neither positively nor negatively to the phrase. “That has nothing to do with the marketing of the state’’

But branding extends beyond tourism. A strong state brand can elevate the price of products sold in the state. Vermont has been so successful in cultivating its image that the addition of its name to a product has been estimated to boost sales by 5 to 10 percent — a phenomenon that led the state’s attorney general to vigorously crack down on non-Vermont companies using the name.

Vermont officials say the value of the state’s brand owes to the state’s greater uniformity of landscape and its consistent embrace of icons such as steepled white churches, red barns, dairy cows, and maple syrup, which tend to confer an ethos of authenticity.

Steve Taylor, New Hampshire’s agriculture commissioner for 25 years, says he struggled, without luck, to attach the New Hampshire brand to something in the hopes of boosting the value of its agricultural goods.

“We tried and tried. It’s something in the DNA that resists in New Hampshire.’’

Taylor, who makes his home in Plainfield near the border of Vermont, said that New Hampshire is a place of distinct regions, where town identity has long trumped state identity — a vestige of its colonial heritage, when a fear of central authority led to the creation of a weak governor and a 424-member Legislature.

“The view from my backstop is how I define my world,’’ he said. “When you have that, it’s tough to get any kind of unity on an image or brand.’’

Bill Siegel, who has done brand research for 20 states, including Maine, said a state like New Hampshire, without unique icons, has two options. It can outspend its competitors, or it can use an approach known as “borrowed interest,’’ which means employing something not necessarily native to the state, such as a celebrity or catchy slogan, to create a positive image.

“You find something that will grab people’s attention and associate it with your destination,’’ he said.

“Highlight the celebrities or famous people who live here and show that they have the resources to live anywhere and they chose New Hampshire,’’ he said.

Some residents, on the other hand, see more sense in a lower-key approach.

Chip Walker, a former New York lawyer and Block Island fisherman who now practices yoga and writes poetry in Portsmouth, said New Hampshire invites “machismo’’ culture with its live free or die ethos. But along with that comes license for creative and lively thinking.

Sarah Schweitzer can be reached at sschweitzer@globe.com.

Correction: Because of an editing error, a Page One story yesterday incorrectly described Mount Washington as the tallest peak in the Eastern United States. Mount Mitchell in North Carolina, at 6,684 feet, is the tallest.