Town rises up for bakery

After outcry, US Embassy in Paris renews owner's visa 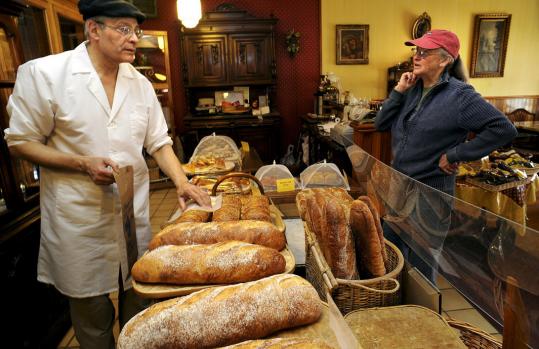 Customer Janice Kaufman stopped in yesterday at the French bakery Le Rendez-Vous for a treat and to get the latest news from Marc Ounis on the fate of the pastry shop. (Mark Wilson for The Boston Globe)
By Sarah Schweitzer Globe Staff / May 21, 2009
Text size – +

COLEBROOK, N.H. - When the boulangerie opened eight years ago in this hardscrabble town near the Canadian border, there was no reason to think it would survive even a day. Baguettes were not in high demand. Indeed, residents who poked heads in the shop often eyed the skinny loaves suspiciously before screwing up the courage to ask what they were. Bets were placed that the Parisian owners would close up shop and move back to France.

But Le Rendez-Vous, a bit of the Left Bank in the North Country, with its gleaming exposed wood beams, tinkling strains of Vivaldi, stuffed sofas, and antique cuckoo clocks, soon was drawing locals and visitors alike for its almond croissants and apple tarts, which sold out every afternoon. The town helplessly watched as a worsening economy forced the closure of local paper mills, layoffs at the nearby Ethan Allen factory, and the shuttering of the Ford dealership. Through it all, Le Rendez-Vous, with its baskets of crusty loaves and paintings of Paris scenes, was a remarkable success.

So when word came in April that the bakery was shutting down - not because of the economy, but because the US Embassy in Paris refused to renew the visa of the owner - the townspeople were vexed. Federal bureaucrats, they were told, had decided that the bakery did not make enough of a profit to warrant a renewal.

It was then that a community rose up in protest.

They began sending letters to the US Embassy in Paris. They lobbied their congressmen to get behind their appeal. They signed a petition by the hundreds and sent it to American diplomats several thousand miles away.

Their argument: The bakery might not earn huge sums of money, but it contributed plenty to the community, providing a place for residents to gather, while offering hope that a small business, even one as unlikely as the boulangerie, could thrive in their town.

"You cannot imagine what they did for me," said Verlaine Daeron, a 51-year-old former nurse-turned-bakery owner. She said her visa application folder at the US Embassy in Paris contained two pounds of letters from Colebrook-area residents and added, "It's a very, very nice town."

This week, Colebrook residents got their wish. The US Embassy reversed its decision and granted Daeron her visa, according to Daeron and the New Hampshire state director for Senator Judd Gregg, who was briefed by State Department officials on the case. A State Department spokeswoman, Laura Tischler, said the department does not comment on individual visa cases.

Yesterday, as word of the reversal trickled out and anxious residents tucked into Le Rendez-Vous, Marc Ounis, Daeron's business partner, stood smiling with arms folded over his apron and baker's whites offering the exact answer they wanted to hear: The bakery would remain open.

"Yeah, yeah, yeah!" exclaimed Linda Tase, a Colebrook resident, as she jumped up and down and clapped her hands. "I was so worried that you weren't going to be here!"

In a telephone interview from the Paris suburb where she is staying with her mother, Daeron said she was stunned by the outpouring of support for the bakery.

Asked what she would have done if the visa had not come through, Daeron said: "I have my visa. It's OK."

Daeron said she hoped to return to Colebrook, to the apartment she and Ounis share above the bakery, sometime this weekend or early next week to once again make chocolate madeleines.

The trip is a long one, literally and metaphorically. Colebrook's downtown is a clutch of stores running the length of several blocks on Route 3. Money has been tight for most residents since the shuttering of paper mills upended the logging industry.

Tourism has helped fill in the holes, with snowmobilers and hunters now a major revenue source for the town of 2,400 residents. A big event is the annual Moose Festival in August. Dining out usually means diner fare. At Howard's Restaurant yesterday, the specials included chop suey with garlic bread and sloppy joes with french fries, either one for $5.95.

When Daeron and Ounis, who met when they worked together at a hospital and later trained together to become pastry chefs in Paris, arrived in 2001 during a vacation tour of New England, they were enamored with the town's friendliness, its smallness, its clean air. Both spoke only French and were comforted by the town's proximity to French-speaking Canada. They bought a former bank building on the main drag and spent a year restoring it with the hope of turning it into a bakery.

Ounis had a green card from a previous stay in the United States; Daeron obtained an E2 investor visa, which allows an individual to enter and work in the United States to run a business in which he or she has invested. Her first visa ran for three years and was renewed for five years, she said. When she returned to Paris last month to renew it again, she said she was told that the bakery did not generate enough income and that her visa would be denied.

She and Ounis reported the embassy decision to New Hampshire state officials, who helped spread word of the denial. Soon residents were writing letters, and US senators, including Jeanne Shaheen and Judd Gregg of New Hampshire and Patrick Leahy, of Vermont, were lobbying on their behalf.

On Tuesday, Daeron reported to the embassy in Paris once again. This time, she was told that her visa would be renewed. The official, Ounis said, told Daeron that Colebrook reminded him of his small village in Wisconsin.

Donna Caron, the town manager in Colebrook, said the reversal was an important emotional boost for her town.

"We have no control over Ethan Allen," she said, referring to layoffs at the furniture maker. "But this was something we could do something about."

She added, "People didn't realize how much they were going to enjoy the bakery. We are a small rural community, and probably 80 percent of the people hadn't a clue as to what a French bakery would be like. But we love it and we want to keep it."