N.H. execution would be first in state since '39 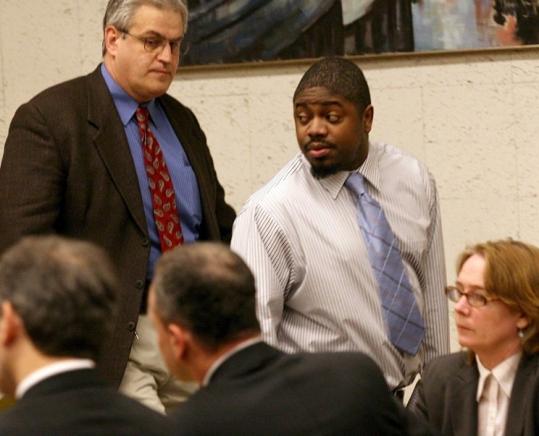 A New Hampshire jury handed down the state's first death sentence in 49 years, finding yesterday that a former Boston gang member with a history of violence should be executed for fatally shooting a police officer two years ago.

The verdict means that Michael Addison, 28, who was convicted of killing Manchester Police Officer Michael Briggs, could be the first person executed in New Hampshire since 1939. Two men were sentenced to death in the state in 1959, but their lives were spared when the US Supreme Court struck down state death penalty laws in 1972.

"In my opinion, this shows that the criminal justice system in New Hampshire works," said Manchester Police Chief David J. Mara, adding that if there was ever a case that called for the death penalty, it was this one. "If somebody can go out and murder a police officer in cold blood and they don't get the sentence that the law calls for, then what does that say about safety for the rest of society? We have to have a deterrent."

Addison's family could not be reached for comment. Briggs's wife, two young sons, and parents were in court for the jury's decision. Afterward, his father, Leland Briggs, said: "This is what we wanted. This is what we got. I love my son and I'm glad."

Governor John Lynch released a statement saying: "The murder of a police officer strikes at the very heart and fabric of our society, and I believe capital murder is the appropriate charge for such a heinous and cowardly crime. I have trust in our justice system, and I believe this was a just verdict."

Bishop John B. McCormack of the Roman Catholic Diocese of Manchester released a statement saying that the church mourned with Briggs's family and the Police Department "for a life cut too short."

But the bishop added that Addison should spend his life in prison, rather than be put to death. "We believe that human life, every life, is sacred and is a gift from God," McCormack said.

The New Hampshire Legislature passed a bill to abolish the death penalty in 2000, but Governor Jeanne Shaheen vetoed it. Similar legislation filed since then has failed.

Representative James R. Splaine, a Portsmouth Democrat, said yesterday that he plans to refile legislation to abolish the death penalty and will propose a commission of prosecutors, lawyers, law enforcement officials, clergy, and others to study the punishment.

"States, meaning us collectively, I don't think should have the power to kill somebody, except in war," Splaine said.

Addison, who grew up in Brockton and Roxbury, was a suspect in a shooting and two armed robberies in New Hampshire when Briggs, a 35-year-old bicycle officer, and his partner confronted him and an alleged accomplice in an alley on Oct. 16, 2006. Addison, who had previously boasted to friends that he would "pop a cop" if necessary to escape, shot Briggs in the head and fled, according to testimony.

Addison showed no emotion yesterday as jurors announced his sentence. They had convicted him of capital murder in an earlier phase of the nine-week trial. The judge is bound by the jury's decision, which the state Supreme Court will automatically review.

Addison's lawyer, Richard Guerriero said he will appeal, a process expected to take years. "We continue to believe the death penalty is wrong, and we will continue to fight against it," he said.

If the sentence is upheld, Addison will die by lethal injection.

Defense lawyers portrayed Addison as the victim of a troubled childhood and contended that he probably suffered brain damage as a baby because his teenage mother was drinking and doing drugs before he was born.

Addison's father, grandmother, and other relatives testified that he had been abandoned by his parents and raised by his maternal grandmother. At 16, he was taken into custody by the Department of Youth Services after he tried to shoot a student outside a Dorchester high school, but the gun jammed. He was convicted later of stabbing a man and stealing his hat.

A Boston police officer testified in the New Hampshire trial that Addison is a former leader of a notorious Boston street gang in the Orchard Park section of Roxbury.

Attorney General Kelly A. Ayotte, who prosecuted the case, said the verdict "demonstrates that a New Hampshire jury supports the work done by law enforcement every day in our state and their role in going out to protect each of us against criminals and, obviously, in our most difficult moments."

She described Briggs as a hero and said she is confident the case will be upheld.

New Hampshire and Connecticut are the only New England states with the death penalty. Both seldom use it. Connecticut had its first execution in 45 years in 2005, when it executed serial killer Michael Ross. Nine people are on death row in Connecticut.

Richard Dieter - executive director of the Death Penalty Information Center, based in Washington, D.C. - said that since the frequency of death sentences is dropping in the country, he does not think that Addison's sentencing represents a trend.

There were about 300 death sentences a year nationally in the 1990s, compared with 115 last year, Dieter said.

"There's a common sense among most states of not being willing to abolish it, but not using it much," he said. "Death sentences are rare, and executions are even more rare."