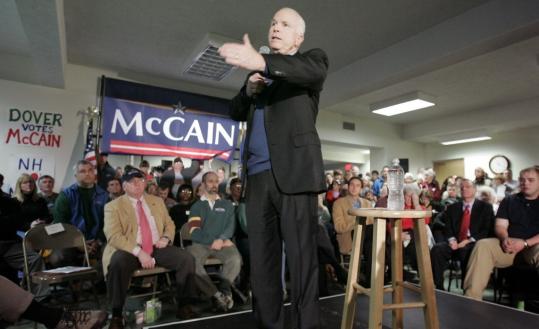 DOVER, N.H. - As Senator John McCain rolled down a New Hampshire highway yesterday in his "Straight Talk Express" campaign bus, he listened to a description of the latest attack on him by his chief rival in this state's primary, Mitt Romney.

He smirked as he heard the former Massachusetts governor's assertion that McCain wanted to allow illegal immigrants to remain permanently in the United States.

Asked how he intended to respond, the Arizona Republican said: "Never get into a wrestling match with a pig. You both get dirty - and the pig likes it."

The back-of-the-bus compartment in which McCain was holding forth went silent for several seconds. Finally, a reporter asked: Was McCain comparing Romney to a pig? McCain laughed and paused as he formulated his response: "That was a general philosophical approach to American politics."

The moment encapsulated McCain's day on the campaign trail yesterday, during which he attended several town hall-style meetings attended by overflowing audiences of several hundred people. He reveled in the large crowds, which he said reminded him of his surge before his 2000 primary win, while also wrestling with an array of charges against him that arrive over the television airwaves and via e-mail messages. He was caustic and confident, cracking jokes in his trademark style as traveled from Dover to Merrimack to Manchester, while Romney and other Republican rivals campaigned in Iowa.

While McCain does not expect a strong finish in Thursday's caucuses in Iowa, where he has earned the enmity of many voters by opposing ethanol subsidies, he is hoping to win New Hampshire on Jan. 8, or at least have a strong second-place finish behind Romney, noting how Bill Clinton was deemed the "comeback kid" in 1992 after coming in second to former Senator Paul Tsongas of Massachusetts.

With some polls showing McCain and Romney in a statistical tie in New Hampshire, Romney yesterday for the second straight day released a TV ad criticizing McCain's position on illegal immigration. "McCain championed a bill to let every illegal immigrant stay in America permanently," the ad said. "He even voted to allow illegal immigrants to collect Social Security."

But at a campaign stop in Merrimack yesterday, a woman echoed the Romney attack, saying that she had heard McCain wanted to grant amnesty to all illegal immigrants already in the country.

"I was informed you were," the woman said.

"You were misinformed," McCain replied.

McCain explained, as he does at many campaign events, that he had supported a proposal by President Bush to allow illegal immigrants to declare their status with the government.

McCain has since dropped his support for the proposal, which floundered in Congress earlier this year. McCain said he wants to build a secure border system, set up a temporary worker program, and formulate a plan to deal with immigrants here illegally.