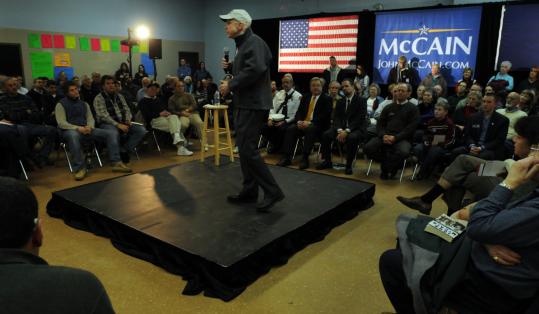 BEDFORD, N.H. - John McCain has hosted so many "town hall meetings" in venues unworthy of the name - veterans' lodges, corporate headquarters, and even a microbrewery - that by the time he pulled up to a white-clapboard municipal building here, the words "Town Hall" in block type along the portico looked like a marquee advertising a nightly engagement for one of the most enduring stage acts in American politics.

This week, as his Republican opponents begin a pre-caucus crisscross of Iowa tracked by an international press corps, McCain will kick off another low-profile New Hampshire tour of the one-man show that made him famous. McCain has hosted as many as four of the sessions in a day - with the first beginning as early as 7:45 a.m. and the last often ending after 9 p.m. - a schedule that plays to both the candidate's performance skills and the underfunded campaign's tactical needs.

"We'll be doing the same things we always do - town hall meetings and lots of interviews - trying to dominate the local press on days the other guys are elsewhere," said McCain strategist Charlie Black.

While other campaigns trade accusations that dominate cable-television coverage, McCain consistently refuses to join in, taking his "Straight Talk Express" bus along a scenic route through a village-green landscape of newslessness. No candidate in either party is so exclusively banking on the first primary state to assert national viability, or has crafted a campaign's character so fully around New Hampshire's unique potential for freewheeling encounters with voters.

McCain's direct outreach to voters helps explain his recent ascent in New Hampshire as the Jan. 8 primary approaches. A Globe poll released today indicates that he has risen 8 percentage points over the last six weeks, commanding 25 percent support and putting him within 3 points of Mitt Romney.

"The McCain town-hall meeting sets the standard," said Fergus Cullen, the state Republican party chairman, who is remaining neutral in the primary. "Any candidate who wants to be successful in New Hampshire should do exactly what he does."

Other candidates would find the experience hard to replicate. The only certainty at a McCain event is that the candidate will begin with some familiar jokes - in Bedford, he began with a full seven minutes of comic material, touching on identity theft and drunk Irish twins - and end, sometimes as long as 90 minutes later, with the piano chords of Journey's "Don't Stop Believin'."

In between, McCain does all he can to manufacture dramatic tension from what could become a prosaic exchange over policy. Even though most of the questions fall into predictable categories for which he has standard answers - Iraq, terrorism, immigration, the economy, global warming - McCain invites his interlocutors to follow up after he has answered their questions, elevating innocent queries into robust debates.

McCain appears to gain more strength from confronting attendees of these meetings than locating areas of agreement. When environmentally minded voters ask about climate change, McCain will usually go out of his way to tell them he supports the expanded use of nuclear power. After a young woman in Bedford cited a poll that said military families were unhappy with the direction of the war in Iraq, McCain disputed the question's premise and berated her for believing the survey's results.

It does not take much for McCain to tell voters who disagree with his positions that they should back another candidate. When a man rose in Raymond and contested the right of Mexican immigrants to receive emergency medical care, McCain said, "It's that option or let them die." This did not seem to move the man, who added that those who die crossing a border "take their chances."

"I guess that's one way of looking at it," McCain responded calmly. "And I understand why you wouldn't support me."

McCain tries to keep his act fresh, relying on opening remarks he adjusts to the news with an anchorman's sense of timing, from constitutional turmoil in Pakistan one day to the debate in Washington over torture the next.

"I think it's very important to be talking about the issue of the day," McCain explained. "The people would be badly served if I started a town hall meeting without talking about Pakistan."

Among McCain's Republican rivals, only Mitt Romney has done a large number of similar open-invitation meetings in New Hampshire, with Rudy Giuliani and Fred Thompson preferring quick visits to restaurants or friendly venues like house parties or businesses. "You're never going to be asked an awkward question at a house party because the guests all know the hosts and aren't going to embarrass their friend," said Cullen.

Where some other candidates steer clear of gadflies for organized causes, McCain preemptively calls on those wearing "I Am a Health Care Voter" or "Stop Global Warming" stickers to give them a platform. In Bedford, McCain pointed to Melissa Skinner, a volunteer for the One anti-poverty moment standing in the back of a crowded room in a black T-shirt with the group's logo. Skinner said afterward that she has attended many candidate events but that "McCain is the first to call on me."

"These are the kind of people we ought to recognize as the outstanding citizens in our community," McCain said in an interview, although his policy of offering the mike to anyone who shows up to an event in costume seems to promote theatrics as much as civics. McCain recently informed a snowman making a point about global warming that he resembled a "chicken" and a teenager wearing a Santa Claus hat that he looked "kind of dorky."

The composition of crowds - which are raised by phone and mail invitations to both Republicans and independents within driving distance - has shifted in recent months, from a concentration of McCain loyalists to a mix of supporters and undecided voters.

The events' unpredictability helps lure independents, a key McCain constituency, according to the campaign's media consultant Mark McKinnon. "People enjoy it because it's a high-wire act and because you never know what will happen. There's always a chance of a car wreck. That's why people go to the Indy 500," McKinnon said, citing such unscripted moments as McCain's notorious rendition of the Beach Boys song "Barbara Ann" with lyrics altered to "bomb Iran."

Indeed, McCain, too, is drawn to the spectacle, often retreating to his bus and reviewing a previous town hall with a theatre critic's focus on the moments of tension and unease.

"In politics, so much is just predictable, totally scripted," said Meghan McCain, the candidate's daughter. "That's why he loves the town hall, because anything can happen."

In Portsmouth, a veteran named Greg Majors rose to say that a motorcycle accident had left him living for the past 22 years with a traumatic brain injury. Majors, in halting speech, said he was "taking up valuable space" and found his existence "pointless."

Unlike other tales of personal despair candidates face - about a sick relative facing rising health-care costs, or from a worker laid off due to outsourcing - there was no policy corner where McCain could find refuge, just one man asking another why he should continue to live.

"Why don't I just pass it off to someone else and just exterminate my life?" Majors asked.

McCain turned away from Majors as he grasped for a response. "Greg, we want you and we love you and we need you, and you will be our inspiration with your courage," McCain told him.

"I've never seen anything like that," McCain said later on, lamenting the "inadequacy" he felt in being unable to comfort Majors, as well as a man at a town hall the previous evening who stood up to talk about his ongoing struggle with Alzheimer's disease.

"When everybody says, 'Oh, don't you get tired of it? Don't you dislike it? Isn't it a drag?' all that, you have experiences like the last two we had within the last sixteen hours," McCain said. "And it's incredible."