THIS STORY HAS BEEN FORMATTED FOR EASY PRINTING
people 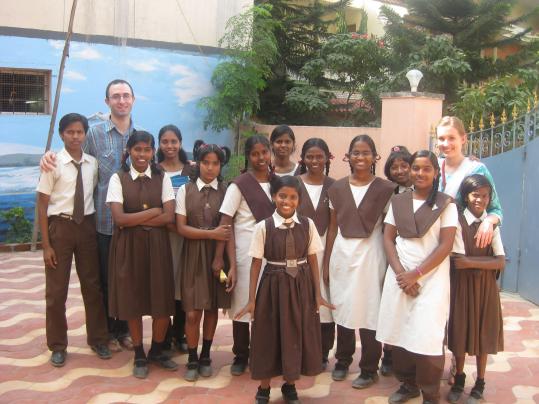 Michael and Allie Rosene-Mirvis Schachter, who were inspired to launch the Chennai Children Foundation to fight human trafficking after a six-month stay in India, visit with students helped by their organization.
By Cindy Cantrell Globe Correspondent / August 26, 2012
Text size – +

Moved by what they learned about human trafficking in Chennai through their involvement in the nonprofit organization Experiential Learning International, the pair began taking steps to establish a foundation upon returning to the United States.

In June 2011, they launched the Chennai Children Foundation Inc. to assist American sponsors in covering living and education expenses of child victims and children of adult victims of human trafficking, while promoting awareness of the global issue.

According to a 2007 report by the United Nations Global Initiative to Fight Human Trafficking, 2.5 million people in 161 countries worldwide were in some form of forced labor. Forty-three percent were sexually exploited, and 32 percent were victims of economic exploitation.

“The entire time we lived and worked in India, the need never really abated, which made us devoted to giving [victims] the tools to break the cycle of abuse and poverty they were born into and otherwise wouldn’t know how to escape,” said Michael, noting that he and Allie continue to regularly travel to India.

“You think about these kids’ horrible stories and day-to-day challenges, but it’s very inspiring that people who face such traumas and have such limited means can be so resilient and vibrant,” Michael added. “We just couldn’t imagine leaving their fate up to chance.”

For more information on their nonprofit organization, visit www.chennaichildren.com.

ARTFUL GIVING: In 1996, Wellesley resident Eliane Markoff began painting as a therapeutic way of coping with the death of her 9-year-old daughter, Rachel, from an inoperable brain tumor. She presented her first painting to Rachel’s twin sister, Audrey, and the second to her husband, Gary Markoff, who hung it in his office.

When one of her husband’s business clients commissioned her to create a painting for his new office, however, Markoff felt uncomfortable accepting money for something so personal. Instead, she and her husband established the Rachel Molly Markoff Foundation   in 1999.

In 2009, the pair launched Art in Giving LLC, which currently represents 25 artists who agree to donate 50 percent of the proceeds from sales of their work to the foundation, which is dedicated to pediatric-cancer research and programs.

Art in Giving’s gallery, at 450 Harrison Avenue, Suite 222, in Boston, features Eliane’s Markoff’s florals and abstracts, daughter Audrey’s colorful mosaics, as well as paintings, pottery, sculpture, photography, fashion knitwear, and jewelry by the other member artists, and even tickets to the Longwood Symphony Orchestra.

The foundation has raised $800,000, according to Markoff, with all but $20,000 (which is kept in reserve) distributed to support research and programs focused on children with cancer.

One example, she said, is providing sponsorships to a summer camp for children undergoing chemotherapy and radiation treatment.

While grateful for corporate clients such as Harvard Medical School, Microsoft Corp., Raymond James & Associates, Harvard Pilgrim Health Care, and Newton-Wellesley Hospital, Markoff said, she was especially thrilled when a newly married couple selected a painting with a gift certificate they had received for their wedding.

“It’s the gift that keeps on going,” she said, “with the recipient enjoying the art and supporting a good cause.”

The juried show will feature 50 pieces of original art, each of which will be offered at a flat price of $100.

The sale will last precisely 150 minutes, with works in mixed media, monoprint, drawing, oil and acrylic painting, pen and ink, papercutting, and photography.

Local artists taking part in the show include Kay Hartung of Acton; Mark Natale and Katrina Majkut of Brookline; and Newton native Courtney Hadden, who now lives in Wilmington.

SUMMER WELL SPENT: Looking back on her paid, eight-week summer internship for the Hyde Square Task Force, 18-year-old Catherine Marris (above) of Chestnut Hill said it was gratifying to be part of a program through which so many students’ skills and maturity have blossomed.

Marris, who graduated from Brookline High School in May, was awarded the internship after being named to the 2012 Student Leaders program by the Bank of America Charitable Foundation. Last month, she traveled to Washington, D.C., for a weeklong leadership summit as one of 225 high school juniors and seniors selected nationwide; other participants included Anay Baez of Boston, Marc-Daniel Paul of Brockton, Thechena Theodore of Cambridge, and Shaq Alberts of Hyde Park.

Marris served as president of the Brookline High School Red Cross Club, and codirector of the Brookline Literacy Partnership. In addition, she was a mentor and writing center coach at Brookline High. This fall, she will begin a dual-degree program in economics and political science through Columbia University and a university in France.

“I’m so thankful to the Bank of America. I learned so much from my internship and met so many amazing people in Washington, D.C.,” said Marris, who participated in Capitol Hill briefings, interactive workshops, and a service-learning project showing how corporate, nonprofit, and government partnerships can revitalize communities.

“I’ve never been around so many people with a passion for service,” she added. “I’ve come away with lifelong friends.”

Mark Contois, who served as director of the Framingham Public Library from 2006 to 2010, has returned to his former position.

“Best job I ever had, which is why I wanted to return,” he wrote in an e-mail. “Framingham is a wonderfully dynamic community with a great library and great staff.”

Contois succeeds Jeanne Kelley, who retired on June 30 after 17 years at the Framingham institution.

Items may be submitted to Cindy Cantrell at cantwell@globe.com.