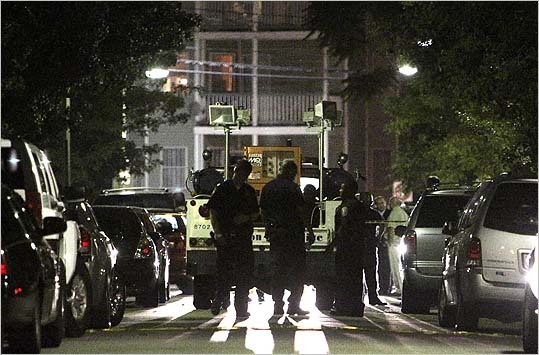 Ten people were shot, three of them killed, Sunday in a day of violence in Boston that shook neighborhoods in Dorchester and Roslindale and left police searching for answers.

Four females were shot Sunday night while they sat in a vehicle parked on Harlem Street. Two of the victims died at the scene, said Cheryl Fiandaca, spokeswoman for the Boston Police Department. A third was in serious condition and the fourth was shot in the leg, a wound not believed to be life-threatening.

Early Sunday in Roslindale, a man in his 30s was killed and three other men were injured in a shooting, according to Boston police.

Fiandaca also said that two more people were shot Sunday night in the area of 156 Columbia Road. Their injuries were not life-threatening. The two Dorchester shootings Sunday night were not connected, she said.

The shootings brought the number of homicides in the city to 33, compared with 34 at this time last year, police said.

Fiandaca said she could not say anything about the ages of the victims on Harlem Street or about a suspect. Commissioner Edward F. Davis told reporters at the Harlem Street scene that police are searching for a white car as part of their investigation. He said the investigation is “very early in the process.”

The entire 200-yard length of Harlem Street, which is near Franklin Park, was cordoned off. Numerous police cruisers occupied the street, and residents crowded outside the boundary of police tape. Three witnesses said that they had heard between seven and 10 shots fired.

Councilor Charles Yancey, who represents the district where both Dorchester shootings took place, told reporters on Harlem Street that residents in the area are on edge.

The street was also the site of a double homicide last November, when two sisters were killed in their apartment at 50 Harlem St.

Stephanie Emile, 21, and her 23-year-old sister, Judith, were shot on the morning of Nov. 14 as one was getting out of the shower and the other was lying in bed. The victims’ sister Samantha, who lived in the same building, alerted police when her 2-year-old niece, covered in blood, walked from the sisters’ apartment and knocked on her door.

Thirty-year-old Jean Weevins Janvier, previously involved in a romantic relationship with Stephanie Emile, is wanted in the killings. Janvier is believed to have fled the country and is being sought by Boston police, the US marshal’s office, and other law enforcement agencies.

The Roslindale shooting occurred at about 3 a.m. near 784 Canterbury St., police said.

The man in his 30s was pronounced dead at the scene, according to police, and the other victims, all in their 20s, had injuries that were not life-threatening.

Police did not identify the victims, and the conditions of the wounded were not released.

Authorities said the man killed was known to police.

It was not clear how many shooters were involved; no arrests were made late Sunday .

The driveway of the home was sealed off with police tape Sunday afternoon. A police cruiser was parked in front of the two-story, beige-colored home, and an officer said no one was inside.

One neighbor, who declined to give her name, said the street is normally quiet, and she did not know the residents of 784 Canterbury St. or the victims. “It was shocking,” she said.

The listed owner of the home did not return calls.

Boston police asked that members of the public who have information about the shooting contact the Homicide Unit at 617-343-4470. People with information who wish to remain anonymous can call 1-800-494-TIPS or text the word ‘TIP’ to CRIME (27463).