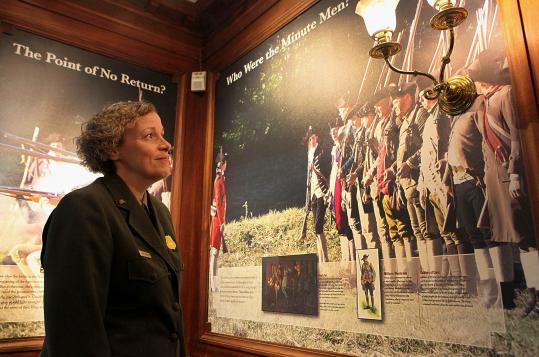 In a way, the new eight-minute video at the North Bridge Visitor Center in Concord seems almost at odds with the ambience of the 18th century. With its vivid colors, laser-sharp photography and even the flat-screen TV on which it is shown, the film depicting the events of April 19, 1775, at the dawn of the Revolutionary War, feels a bit more 21st century.

But that’s part of the challenge the Minute Man National Historical Park faces in trying to bring historical events to life, according Leslie Obleschuk, the park’s chief of interpretation. Battlefields, plaques, and monuments make for good photo opportunities, but don’t always put visitors in the center of the action.

So for the past two years, the National Park Service has been working on ways to liven up the exhibits at the North Bridge center, leading up to the revamped offerings unveiled earlier this summer.

“For the first time, we now really have an interpretative exhibit here,” said Obleschuk. “In the past, we relied on a diorama and mannequins. Now we have a cohesively presented story that really helps visitors understand the events.”

Unlike its better-known counterpart, the Minute Man Visitor Center in Lincoln, the North Bridge Visitor Center sometimes gets overlooked. It is located a quarter-mile from the historic landmark that its visitors have primarily stopped to see: the North Bridge, site of “the shot heard round the world” memorialized by Ralph Waldo Emerson, where the Minutemen rose up as a powerful volunteer force to confront the British army.

Even the walk from the North Bridge to the Visitor Center contributes to the experience of understanding just what happened that fateful day.

As you pass through the sweeping expanses of wild grass from the river uphill toward Liberty Street, you get a palpable sense of what it was like for those soldiers to make their way through these same meadows. The Visitor Center is in a brick mansion built in 1911 by descendants of Major John Buttrick, the Colonial officer who issued the first order for the militia to fire upon British soldiers.

More historical treasures lie within the Visitor Center, some of them newly installed. Until recently, the centerpiece of the three-room space was a glass-encased diorama showing soldiers dotting the hillside on both sides of the Concord River and over the bridge.

Along with the new video, produced by Northern Light Productions of Boston, which brings the Battle of Concord to life by filming historical reenactors on location, the exhibitions area now contains displays of archeological artifacts, documents, and weaponry, including an original cannon.

“We focus on three men who played key roles in the Revolutionary War: Captain David Brown, whose house foundation is visible from the park; Colonel James Barrett; and Major John Buttrick,” Obleschuk said. “Those are names that may be fairly well known in Concord, but definitely are not known to visitors from across the country and around the world.”

The updated center in the Buttrick Mansion is at 174 Liberty St., and is accessible both from the Liberty Street parking lot and by the gravel path from Monument Street across the bridge and over the battlefield.

Sue Merlino, owner of Concord Bike Tours, has heard plenty of positive feedback from her customers.

“Having more artifacts that people can see up close really helps with the tour experience,” Merlino said. “I do love the diorama, which has been there for such a long time, because it really puts the battlefield into perspective. But the new video ties in so well with the experience of actually being there in the park.”

On a recent summer afternoon, Barbara Trader, from Virginia, and her mother, Janet Trader, of Wisconsin, were visiting the North Bridge for the first time.

Janet Trader, who calls herself a “history buff,” said she was already familiar with the story of how the British headed from Boston into the countrywide to seize munitions hidden in Concord, did battle with the Minutemen at Lexington Green, and continued on to Concord, where the startling force of more than 200 farmers and other volunteer fighters forced them to turn back.

But the Visitor Center’s new film reenactment left her impressed.

“What the film really makes clear is the intent behind the battle, how it’s almost an accident that the Minutemen entered the battle,” said Barbara Trader.

Beverly Koenigsberg has visited the North Bridge many times over the years, both as a Concord resident and as a licensed guide affiliated with the Greater Boston Tour Guide Association. She believes that with the newly renovated exhibition space, the Visitor Center finally matches the elegance of the stately Buttrick Mansion in which it is located.

“The old exhibits were poorly lit and arranged in a seemingly random fashion,” Koenigsberg commented after her first visit to the new space. “Now it is far better organized, more accessible, and more user friendly.”

Nancy Shohet West can be reached at nancyswest@gmail.com.