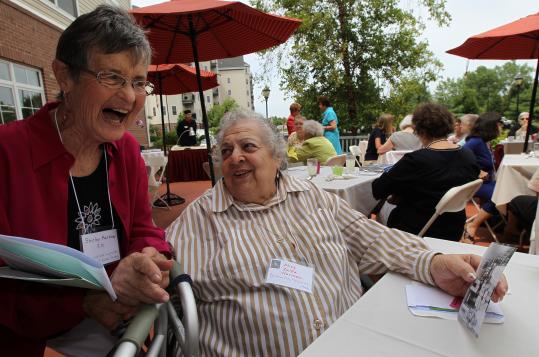 Shirley Harrow (left) had a warm greeting for Alice Zalfa Norman of Quincy at a reunion of area members of the US Cadet Nurse Corps. (Barry Chin/Globe Staff)
By Emily Sweeney Globe Staff / August 5, 2012
Text size – +

They have been called the heroes nobody knows about.

The US Cadet Nurse Corps was the largest group of uniformed women to serve their country during World War II, helping to staff hospitals on the homefront during one of the worst nursing shortages in history.

On Tuesday, 22 alums of the corps gathered for a unique reunion on the patio outside Atria Marina Place, a senior apartment complex in Quincy. It was the first time these retired nurses got together as a group. But even though they attended different nursing schools and worked in different places, they shared much in common: They all started their careers in the US Cadet Nurse Corps and went through the same training, wherever they were.

Coming from all over Massachusetts, Maine, New Hampshire, and Connecticut last week, the alums took time to reminisce about their student nurse days when they lived in dormitories under the strict watch of housemothers who, among other things, inspected their uniforms and made sure their hair didn’t touch their collars. The reunion was like a scene from the movie “A League of Their Own”: Gray-haired women, now in their 80s, talked and laughed about the old days, and looked at black-and-white photographs taken when they were young and bright-eyed.

The reunion luncheon was organized by Shirley A. Harrow, a Quincy resident who calls the nurse corps’ 180,000 women “the heroes nobody knows about,” and credits them with saving the American health care system during World War II.

Harrow said that in the years following World War II, the nurses were essentially told, “Thanks, girls, go home, and make babies,” and their contributions were largely forgotten.

“They are remarkable women . . . and nobody’s heard about them,” said Harrow. “They deserve recognition . . . at least a flag for their grave.”

A registered nurse herself, Harrow was too young during the war years to join the Cadet Nurse Corps, but remembers seeing the glamorous recruiting posters when she was 12. She has spent more than a decade getting in touch with hundreds of former cadets from all over the country and lobbying the federal government to recognize the contributions of the women in the corps.

In February, Harrow and several former cadets met with US Representative William R. Keating, a Democrat from Massachusetts, to discuss H.R. 1718 — United States Cadet Nurse Corps Equity Act, legislation he is cosponsoring that would grant veteran status to cadet nurses. Among the former cadets to attend that meeting was MJ Ekstrand of Weymouth, who trained at Roger Williams General Hospital in Rhode Island, graduating in 1947.

“There is no hierarchy when it comes to service, and as a nation, we must honor the commitment of everyone who [has] served our country, including those who cared for the injured soldiers during World War II,” Keating said in a statement.

When the Cadet Nurse Corps was established in 1943, the federal government launched a massive recruiting campaign, distributing films, posters, and brochures that encouraged young women to enter nursing. One promotional pamphlet featured the image of a confident-looking nurse with curly hair wearing a cadet uniform, along with the message: “Get FREE training with pay in the world’s PROUDEST profession. Join the U.S. Cadet Nurse Corps.” Inside, the brochure explained how the program would cover tuition for nursing school and provide a monthly stipend. It also assured that “nurses make fine wives and good mothers” and that “the marriage rate among nurses is high.”

The government’s recruiting campaign proved to be successful: By 1945, 85 percent of nursing students in the country were cadet nurses.

Fifty-seven Massachusetts hospitals had cadet nursing programs, according to Harrow, and 11 of those nursing schools were represented at the July 31 luncheon.

Dorothy Harrington Hall, 86, of Westford, was among the attendees. A native of Greenfield, she entered the corps in 1943 and trained at Massachusetts General Hospital’s nursing school. Hall said she became a cadet because “that was the thing to do.” It also launched her long career in public health: She later became the district health officer for the northeast region of the Massachusetts Department of Public Health.

Alice Zalfa Norman and Jennie Kleczek Burns swapped stories and shared laughs about the fun they had as student nurses.

There was the time a student nurse ran down the dormitory hallway wearing nothing but a shower curtain because one of her classmates had taken off with her clothes and towel.

Another time, a student nurse snuck out of the dorm for the night, placing blankets on her bed in the shape of a body and a roll of toilet paper wrapped in a hair net upon her pillow so it looked like she was sleeping.

“We had some good times,” said Burns, of Needham, with a smile.

Burns, 84, attended the nursing school at the New England Hospital for Women and Children in Roxbury, now known as the Dimock Center, and lived in a dorm on the property with other student nurses. Her sister, Mary Ferson of Milton, who accompanied Burns at the lunch, recalled visiting Burns in the dorm in the 1940s and thinking, “Boy, what an exciting life she had being away from home.”

Norman, 84, of Quincy, graduated from Boston City Hospital’s school of nursing in 1948. “We were so young and so dumb,” she said, with a hearty chuckle. If she had not entered the corps, she said, “my life would have taken a completely different course.”

A website for the corps (www.uscadetnurse.org) was launched in October 2011 featuring profiles of cadet nurses, images of recruiting posters, literature, and other memorabilia, as well as news and legislative updates.