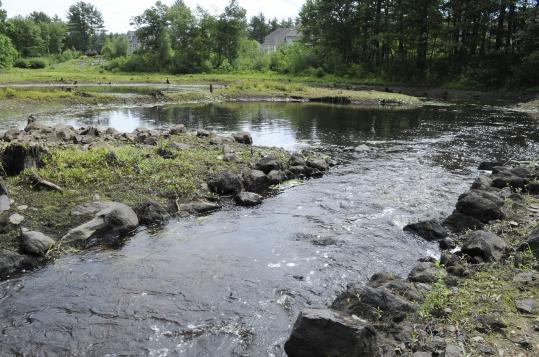 A view upstream of Curtis Pond Dam, which was removed in June in an effort to help restore Boston Brook in Middleton. (Lisa Poole for The Boston Globe))
By David Rattigan Globe Correspondent / July 22, 2012
Text size – +

Tim Purinton  makes the analogy that removing dams from a river is akin to getting rid of clogged arteries in the body.

"If you're interested in rivers and river ecology, there's no better thing you can do for a river than remove a dam," said Purinton, director of the Division of Ecological Restoration for the state Department of Fish and Game.

Removing the obstruction allows not just better passage for fish and other aquatic species, but also the movement of sediment and a change in water temperature, he said. "If you can clean the arteries and allow for the free flow of water, sediment, and nutrients, you bring back river health almost immediately."

With local and federal partners, the division is currently involved with 30 dam projects around the state, including the removal of the Curtis Pond Dam in Middleton in June.

That project — run by the town of Danvers with state, federal, and watershed association partners — could be the first of many in the Ipswich River watershed, which covers 155 miles in all or part of 21 communities from Wilmington to Ipswich, connected by the Ipswich River and its tributaries.

While the Curtis Pond Dam is the first to be removed in the watershed, a plan to remove dams to restore stream flow, migratory fish, and river habitat has been an initiative of the Ipswich River Watershed Association going back to 2005.

“There are some 70 dams in the watershed,” Kelder said. “A large portion of those are old mill dams, and most aren't ­doing what they were initially built to do. Many aren't used at all anymore, so we certainly hope it moves through the water­shed."

Because they block fish ­migration routes, slow the downstream movement of ­water and sediment, and alter temperature and oxygen levels, dams change the characteristics of a watershed. While they may serve important functions such as creating water supplies or electric power, many are no longer necessary. Many of those in the watershed are failing due to old age and may present a public safety hazard.

For the federal government, the main concern is about the future of species that spawn in rivers. Their declining numbers are seen as potentially damaging to fisheries.

"For us, it has to have the marine connection, which this site does," said Eric Hutchins, fisheries biologist for the Gloucester-based National Oceanic and Atmospheric ­Administration Restoration Center. "I've been looking at this site for 12 years now, maybe more, and I've actually seen sea lamprey at the base of the dam, who could no longer go further up. Without a doubt, for a number of years, we knew there was a connection here."

The hope is that opening up the river will bring back the population of migratory fish that serve as food for larger species.

River herring and American eels are currently being evaluated for inclusion on the federal endangered species list, said Hutchins. “Every dam removal is an opportunity to build some resilience in the longevity of those species, so we're targeting them in particular."

There have been feasibility studies either started or completed on the removal of or upgrades to three other dams on the Ipswich River: the Ipswich Mills Dam in downtown ­Ipswich, the South Middleton Dam (also called the Bostik Dam), and the Willowdale Dam in Topsfield. Those are the only three dams on the river itself. The others are on the river's many tributaries.

There are currently no plans to remove any of those dams, and on the Willowdale Dam a more likely course of action might be an enhancement that includes a new fish ladder.

The Curtis Pond Dam was an obvious choice for removal for a number of reasons, includ­ing the willingness of its owner to have it removed.

The dam was situated in Middleton on Boston Brook (it is sometimes called the Boston Brook Dam), but actually owned by the town of Danvers. It had deteriorated over the years, and by removing it, the town was able to avoid the ­potential liability and future upkeep.

"Going through the process, it became an obvious decision to take the dam out," said town engineer Rick Rodgers.

Including feasibility studies, permitting, and construction costs, the project cost approximately $270,000, paid from town funds, the Massachusetts Department of Environmental Protection, and the Gulf of Maine Council. Rodgers said that rebuilding would have cost well over a million dollars.

There are also fish ladders on all the dams that lead to it, which means that migratory fish have access to the area.

In coming months, both the state and watershed association will be monitoring the site for changes in habitat and aquatic life and comparing the changes with data collected ­before the dam was removed.

At the same time, the association would like to move forward on other projects.

“We have enough information on how systems respond to this sort of restoration work to move forward on other dams in the watershed,” he said, “but we hope this will be a great local example."

David Rattigan can be reached atDRattigan.Globe@­gmail.com.