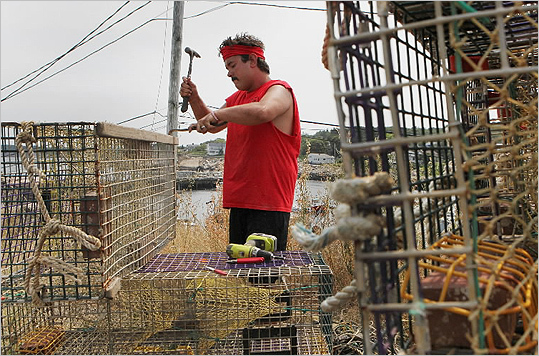 ROCKPORT -- Tumbling lobster prices have spurred a rush on the normally pricey seafood, from popular Boston waterfront spots like James Hook & Co. to weathered fish shacks to some grocery stores.

“We’ve been selling out every day,” said Brian Sansoucie, a supermarket manager on the North Shore. “Customers are thrilled, and we just can’t keep enough of them.”

At Yankee Lobster Co. in Boston, where lobster was going for $5.99 a pound, sales over the weekend were up by half, while markets reported unusually brisk business.

Nelson Rodriguez, 49, from Jamaica Plain, regularly buys 20 pounds of lobster for family cookouts and said he is getting used to dining in style.

“It’s pretty great,” he said. “I’m saving about $40 each time. A lot better than at the restaurant.”

Lobster has long enjoyed a gourmet image, a deep-sea delicacy that requires deep pockets. But this summer, as lobster prices have plunged in a saturated market, the succulent treat has increasingly become a bargain.

At The Gloucester House Restaurant, Lenny Linquata said the market upheaval has flipped the seafood hierarchy, making lobsters among his cheapest seafood. As a result, a lobster roll that would have cost $35 is now $25, he said. Hot boiled lobster that would often run close to $30 is going for $15.95.

In Massachusetts, fishermen are selling lobster for less than $3 a pound, down by more than one-third over last summer. In Maine, the price this week has fallen to around $2 a pound, about half of what fishermen need to break even.

“It’s a real hardship,” said Robert Bayer, who directs the Lobster Institute at the University of Maine. “Some of these guys aren’t even going out.”

The price drop was brought on by an early arrival of soft-shell lobsters, which typically do not arrive in force until July. This year, fishermen were harvesting them in May and in abundance.

Marine specialists say lobsters this year shed their shells earlier than anyone could ­remember, a likely result of warm waters that boosted the aquatic food supply and drew lobsters from hiding. The mild temperatures accelerated the start of the season and led to an excess of soft-shell lobsters, which have less value because they are difficult to shift.

At the same time, Canadian fisheries wrapped up a strong lobster season that filled processing plants to capacity. Most seasons, the plants turn to their southern neighbors for extra supply, but this time there was no need.

When a rush of soft-shell lobsters hit the docks well ­before summer began, there was “nowhere for them to go,” said Bill Adler, who directs the Massachusetts Lobstermen’s Association.

“Everybody’s catching lobsters, and the demand can’t keep up with it,” he said.

For fishermen, that has created a painful scenario where they bring in bountiful catches, only to receive a disappointing return.

“It’s too much of a good thing,” said Dane Somers, who directs the Maine Lobster Council, an industry group. “The harvest has been great. We just didn’t need it six weeks early.”

The plunge in prices, while a boon to consumers, has caused havoc across the industry.

“We haven’t seen these prices since the 1970s,” said Robin Alden, director of Penobscot East Resource Center, a Maine group that supports fishing communities. “The market has not had time to clear, and the processors are plugged up.”

The majority of Maine lobsters are ultimately sent for processing, Alden says. Lobsters sold live to customers make up just 15 percent of the market.

Maine catches have climbed sharply in recent years, rising from 64 million pounds in 2007 to 105 million pounds last year. Specialists credit the increase to regulations aimed at sustaining the lobster population but say it does not fully explain the ­exploding numbers.

“It’s unprecedented,” Alden said. “The fisheries are managed well, with common-sense regulation to protect the breeders. But this is an ecological phenomenon.”

Bob Glenn, chief lobster ­biologist for the state of Massachusetts, said lobsters are highly sensitive to temperature, but have thrived as waters north of Cape Cod have warmed.

That, along with tepid ­demand during the recession, has caused prices to drop, which in turn has spurred many fishermen to work that much harder.

“It’s a vicious cycle,” Glenn said. “Prices are awful, so you try to do more volume to turn a profit. But that just floods the market even more.”

But the season may yet turn around. Many specialists predict that prices will rise as summer moves along. On vacation, it is hard to pass up a lobster dinner, after all.

Fishermen, meanwhile, are cautiously hoping for the best. As he worked on his traps ­under a morning sun, Nathan Bolcome said the season began with great promise. As soon as they started, the traps were coming up full, day after day.

“Usually, we don’t really get going until the Fourth of July,” Bolcome, 27, who has worked on the water his whole life, said last week from a fisherman’s cove in Rockport. “But this year, we’ve been rolling since the beginning of May.”

But before long, the unforgiving laws of supply and demand dashed hopes for a banner year.

“We caught so many right away,” Bolcome said, his words bittersweet. “The price started out low and never had a chance to get higher. There were just so many.”