US attorney looking at Democrats who may have gained from Probation Dept. hiring 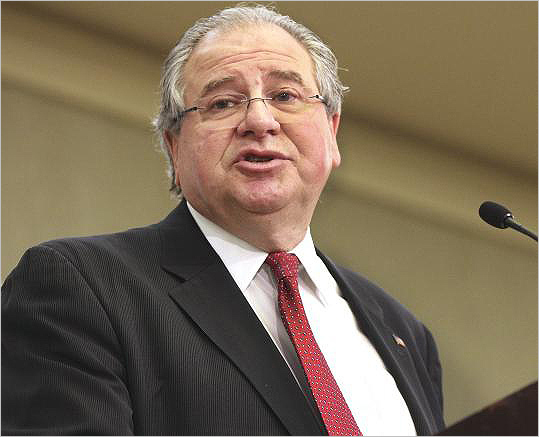 (Wendy Maeda/Globe Staff) Robert DeLeo says that he did not use his ties to former Probation Commissioner John J. O’Brien to win votes from fellow Democrats to become the speaker of the Massachusetts House.
By Andrea Estes and Scott Allen Globe Staff / July 15, 2012
Text size – +

Federal prosecutors investigating the scandal-plagued Probation Department are focusing on Democratic legislators who may have benefited from the agency’s allegedly rigged hiring system, including House Speaker Robert A. DeLeo, one of the most influential politicians in helping people get jobs under former commissioner John J. O’Brien.

People with direct knowledge of the grand jury proceedings in Worcester say that prosecutors have also called at least two legislators who voted for DeLeo for speaker after people close to them received probation jobs.

“Yes, I was called to testify and I cooperated fully,” said Representative James J. O’Day of West Boylston, one of the two. He has said that he planned to vote for DeLeo even before probation hired one of his colleagues in 2008.

US Attorney Carmen M. Ortiz has been investigating the Legislature’s role in politicizing the hiring process at the Probation Department for months, even calling former House speaker Salvatore F. DiMasi from his prison cell in Kentucky to testify before the grand jury last winter. But in March, when Ortiz announced the first criminal indictments from the 20-month-long inquiry, only O’Brien and two former top lieutenants were named.

“This is just one step in the ongoing investigation,” Ortiz said at the time.

Since then, prosecutors have been ramping up efforts to identify actions taken by lawmakers that could be criminal, such as accepting probation jobs for family and friends or even campaign donations from probation employees in exchange for voting to increase the agency’s funding or to vote for a certain candidate for speaker. It is a violation for lawmakers to accept something of value in exchange for any official act.

DeLeo, who has described O’Brien as a friend, was one of the most successful legislators at helping people obtain jobs at probation, including his godson, Brian Mirasolo, who, at age 28, became the youngest chief probation officer in Massachusetts history.

But DeLeo strongly denies that he used his connections with O’Brien to win votes from fellow Democratic legislators for the speakership, which brought him a pay increase of more than $30,000 along with a larger staff and far greater influence over state policy.

“There is no way any individual can honestly testify that jobs were traded for votes for speaker, because it did not happen,” said DeLeo spokesman Seth Gitell.

Paul F. Ware, the independent counsel who issued a damning report on the hiring practices at the Probation Department in 2010, said he surmises that federal prosecutors are now trying to negotiate a deal with O’Brien to get his cooperation in the investigation of politicians’ culpability.

“In terms of a criminal investigation, I think it’s predictable that the US attorney focus on political figures who may have had a lot more to gain” from Probation Department patronage than O’Brien, said Ware, a former federal prosecutor who is now a partner at Goodwin Procter in Boston.

O’Brien may be more motivated to cooperate since he was indicted on federal racketeering, conspiracy, and mail fraud charges that could result in up to 20 years in prison and $250,000 fines for each count if he is convicted. He also faces state bribery charges for allegedly funneling campaign donations by his employees to then-state Treasurer Timothy P. Cahill in exchange for a job for his wife at the state lottery, which Cahill oversaw. Cahill was not charged in the case, though a senior staff member was.

O’Brien “has to be very concerned for his family, and he doesn’t want to spend the next 10 years in jail,” said Ware, adding that he has no direct knowledge of plea deal negotiations.

O’Brien’s new legal team, appointed to defend him in June after O’Brien said he could no longer afford his own lawyers, declined to comment on any aspect of the case.

A spokesman for Ortiz also declined comment, but one person who follows the investigation closely said that four assistant US attorneys joined in the questioning during recent grand jury sessions, which is more than usual, and their focus was clear: elected officials.

People who follow the investigation closely say that prosecutors’ interest in politicians extends back to former House speaker Thomas M. Finneran, a key architect of the probation hiring system.

Finneran pushed through a 2001 state budget amendment that gave O’Brien — a Finneran protege and sometime jogging partner — nearly complete control over hiring and firing in the 1,800-person agency. After that, probation’s budget, which is set by the Legislature, soared and by 2010, probation employed at least 250 people who were friends, supporters, or relatives of politicians and court officials, the Globe Spotlight Team found in 2010.

Legislative leaders had by far the most success in helping people get probation jobs, Ware found. Finneran’s successor, ­DiMasi, now serving an eight-year prison sentence on an unrelated corruption conviction, was so important to O’Brien that he had a folder to track ­DiMasi’s recommended candidates for jobs.

Over time, the politically motivated hiring process led to an explosion of less-qualified candidates winning jobs at probation, which is supposed to protect the public from criminals serving their sentences in the community. The indictment of O’Brien cited 26 instances where probation officials hired or promoted candidates supported by lawmakers and judges, even though they were not the most qualified. DeLeo sponsored one of those candidates — his godson — while Senate President Therese Murray of Plymouth backed three.

Murray declined comment on the investigation, but said she “was not aware of any senators being called” before the grand jury.

Prosecutors are particularly interested in the heated 2008 race in the House to succeed DiMasi, who became the third consecutive Massachusetts House speaker to be convicted of a crime. Initially, backers of Rogers thought they could get support from enough Democrats to win, but DeLeo ultimately got the speakership on Jan. 27, 2009, without a vote because Rogers withdrew in the face of eroding support.

In the spring of 2008, amid speculation that DiMasi might step down, the Legislature unexpectedly gave the Probation Department $6 million more than judicial officials requested. First, the House Ways and Means Committee, then chaired by DeLeo, recommended an additional $2.3 million more than Chief Justice for Administration and Management Robert Mulligan requested. Then, probation’s friends in the House increased funding by another $3.7 million.

The windfall gave O’Brien more money for a flurry of hiring. By May 2008, O’Brien had hired people associated with legislators including O’Day, Harold P. Naughton Jr. of Clinton, and Geraldo Alicea of Charlton.

O’Day confirmed that he was called to the grand jury, though he wouldn’t say what he testified about. People familiar with the grand jury proceedings say Naughton also testified, but he did not return a call asking for comment. Alicea said he was not subpoenaed, though he was asked for documents shortly after the Globe Spotlight Team’s series.

All three deny any wrongdoing, saying they always planned to vote for DeLeo for speaker and that the probation jobs for people associated with them did not affect them.

Former representative Charles Murphy of Burlington, who became the Ways and Means chairman after DeLeo, confirmed that he, too, testified in June, but wouldn’t discuss his testimony. Likewise, Thomas Frongillo, a private lawyer hired to represent the House and Senate in the probation case, confirmed that he has interacted with the grand jury recently, but declined to be specific.

Though some observers expected the investigation to wrap up months ago, there are indications that prosecutors may be broadening their inquiry. According to one court official who follows the investigation, prosecutors recently asked about legislation that a group of ticket brokers pushed in 2006 and 2007 with the help of Richard Vitale, DiMasi’s former accountant, who was acquitted in the federal corruption case that sent DiMasi to prison.

At the time, DeLeo was chairman of the Ways and Means Committee, which pushed the bill that lifted the state cap on ticket prices for concerts and other events. The House passed the bill, but it stalled in the Senate.

Gitell, DeLeo’s spokesman, said he was unaware that prosecutors were interested in the ticket legislation.

“We have no information that there is an ongoing investigation of the ticket broker legislation and have not been contacted in that regard,” he said.

Several people who have been following the probation investigation say they don’t expect more indictments, if any, until after the November elections. Ware, the special prosecutor, said he believes Ortiz’s office will seek indictments of some politicians.

“I think it is inevitable that at least some of the public officials who were direct beneficiaries of the hiring and promotion system within probation will be charged,” he said.