Their petition drive contends that Johnson has lost public trust 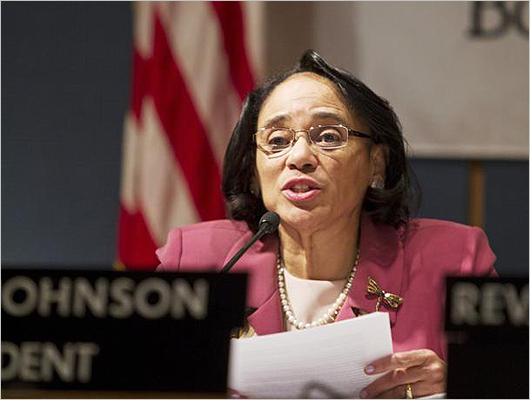 A group of Boston public school parents launched a petition drive Friday to oust Superintendent ­Carol R. Johnson, arguing that she has lost the public’s trust after disclosure that she took no disciplinary action against a headmaster who admitted beating his wife and that she had sent a supportive letter to a judge presiding over the case.

The petition calls on Johnson, who apologized earlier this week for her actions, to resign immediately. If she does not, the signers ­demand that the School Committee fire her, saying Johnson “has shown a clear pattern of unwise, politically motivated, and uninformed choices that have put the children of Boston public schools at risk.”

“This is inexcusable and unforgivable,” said Valerie Madden, of Roxbury, whose children attend Boston Latin Academy and Mission Hill K-8 School, referring to Johnson’s failure to remove the headmaster, Rodney Peterson. “I do commend her for standing up and saying I’m sorry. But that’s not good enough. She has to go.”

Meanwhile, Johnson’s supporters are organizing a rally in support of the superintendent scheduled to be held Saturday morning at Bethel AME Church in Jamaica Plain. The rally is an opportunity for supporters to speak about all that Johnson has accomplished since becoming superintendent in 2007, said Rev. Ray Hammond, an ­organizer.

“Our concern is that the incident is being used as an opportunity for people to vent their anger against the superintendent for things she has done to advance the system,” said ­Hammond. “When you make tough choices, you are going to find people upset by it.”

However, Hammond added, “We concur this situation should have been handled differently. But we want to make sure [Johnson] continues to work to make Boston a better school system.”

The Globe reported Sunday that Johnson did not place ­Peterson on administrative leave after he was arrested in an assault on his wife in June 2011. She also allowed him to keep his job as a coheadmaster at the O’Bryant School of Mathematics and Science in Roxbury after he admitted to sufficient facts for a jury to find him guilty. Peterson resigned last month to take a job elsewhere.

Johnson apologized a day ­after the Globe report ran, saying she should have handled the situation differently, a ­reversal from her previous statements in which she said she stood behind her decision.

Since then, Councilor John Connolly has urged Johnson to resign, while Mayor Thomas M. Menino, who publicly criticized Johnson for her handling of the Peterson case, remains firmly behind her. The Rev. Gregory Groover, the School Committee chairman, has also voiced his support.

Johnson was not available for an interview Friday and ­instead issued a statement.

“I’m sure most of our city’s families would prefer I learn from this mistake, make the right changes, listen to the community, and move forward,” Johnson wrote. “That’s what I’m focused on. We have very important work to do for the children of Boston.”

Friday night, Johnson notified staff of a draft policy that explicitly states that employees confronting allegations of serious misconduct would automatically be placed on administrative leave and an investigation would commence, which could lead to termination based on what was uncovered.

But Johnson’s characterization of her mishandling of the Peterson case as a “mistake” has riled some parents. “It was not a mistake; it was a choice,” said Dmitry Smelansky, a ­Boston Latin Academy parent. “I could not accept her apology. . . . I believe she clearly knew what she was doing and she wasn’t concerned about the consequences. She didn’t think people would find out.”

Many of the parents calling for Johnson’s ouster were ­involved in the successful effort last year to block Johnson’s poorly researched proposal to relocate Boston Latin Academy to the shuttered Hyde Park High School building, which turned out to be too small to ­accommodate all of Latin Academy’s students.

Some other parents pushing Johnson to resign aggressively fought her plan to move ­Mission Hill K-8 School from Roxbury to Jamaica Plain, creating an uproar last spring as the City Council debated a loan order to pay for that move and other facility changes. The council ultimately approved the loan order.

In their petition, parents not only blast Johnson for the ­Peterson incident, but a string of missteps in recent years, such as her handling of chronically late school buses, premature closing of schools that has jeopardized state reimbursements, and cafeteria freezers stocked with outdated food.

The petition was posted online Friday. In a few weeks, ­organizers plan to go through neigborhoods seeking signatures.

They expressed frustration that Groover has not honored a request by fellow member Mary Tamer to hold a School Committee meeting to discuss the Peterson case. The School Committee, which is on summer break, is not scheduled to meet again until September.

“I’m in a state of absolute shock,” said Goldstein, of Allston. “I’m only grateful that my son is too young to follow the news.”