No one knows who constructed Upton’s domed cave, but a townhired archeologistmay shed some new light 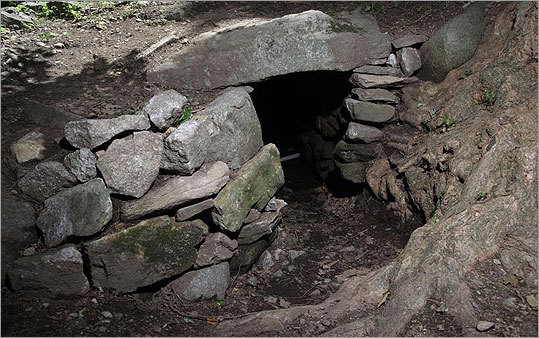 For decades, the people of Upton have debated who created the mysterious stone chamber built into a hill in the woods. The cave is designed like an igloo, with a long entrance, a round central chamber, and a stone roof that was intricately engineered, without mortar, into a stable dome.

Now the Upton Historical Commission has hired an archeologist to see whether the town can put an end to the debate, sometimes contentious, about the origin of the cave that was once used for Boy Scout ceremonies. And for the first time, the chamber is open to the public, as part of the new Upton Heritage Park.

About 500 stone chambers dot the fields and woods of the Northeast. Researchers and local residents have offered various theories about their original architects: colonists who built the caves as root cellars, or Native Americans, or perhaps Europeans who arrived in North America before the Vikings.

“Whatever these are, they are part of our cultural heritage,” said Peter Anick, the state coordinator for the New England Antiquities Research Association. “Whether it’s Native American or European or something else, they were obviously designed for some purpose. Just because you don’t completely understand them doesn’t mean we shouldn’t be trying to protect them and trying to learn more about them.”

Upton’s chamber is one of the largest, with a 14-foot entrance tunnel and a dome that rises about 12 feet, topped by a large capstone. Inside the dome, the chamber is completely dark.

“It’s one of the best examples of its type in the United States because it’s got a corbelled roof, like a beehive shape,” said George Patterson, a member of the town’s Historical Commission. “And the transition from that tunnel into that domed shape, that technology is very advanced.”

The Historical Commission is waiting for the archeologist’s final report, but preliminary findings suggest the chamber is at least 400 years old. The town agency is raising money to analyze more soil samples — each one costs $1,000 — through a process called optical dating, which determines when sediment last saw daylight.

Acton is home to another mysterious stone chamber, known as the “Potato Cave,” protected in the Nashoba Brook Conservation Land. It got its name from an early assumption that it was built in Colonial times as a root cellar. Another chamber, in Marlborough, was destroyed.

Upton’s Historical Commission began looking for ways to acquire the property around the local chamber when its owners made plans to use the land for multifamily housing. In 2006, the town spent $400,000 from Community Preservation Act funds to buy the land. This spring, Upton Heritage Park officially opened.

The Mashpee, Narragansett, and Wampanoag Aquinnah tribes surveyed Pratt Hill and found astronomical links between the chamber and cairns on top of the hill. Last fall, the chamber, nearby land, and Pratt Hill were made eligible for the National Register of Historic Places.

“Each town tries to figure out what to do with them,” said Cathy Taylor, also on the Historical Commission in Upton. “There’s not really a statewide agenda for preserving them.”

“Some ritual sites demonstrate the connection between the earth, man, and the cosmos, sites developed for the living in order for them to foresee events and to project themselves into the future,” they wrote in 1982. “Some of the stone chamber sites of New England may be such cosmological sites that transcend the secular side of man’s existence.”

In the article, published in the New England Antiquities Research Association Journal, they hypothesized that Native Americans built the chamber around 710 AD as an observation area to study the changing skies, which guided Native Americans through time, including celebrations and corn planting.

The researchers used a strobe light to make a direct path from the stone chamber to the cairns, and found the line pointed directly to the Pleiades constellation.

“When they came to visit the chamber, they said based on the orientation of the chamber, you should find something up on the horizon, on a hill,” Patterson said. “So the volunteers left here, hopped in their cars, went to the top of Pratt Hill, and found stone cairns.”

When the sun sets on the horizon during the summer solstice, it can be seen from inside the stone chamber, Anick said. Since the field of view through the tunnel is narrow, “that’s a pretty amazing coincidence, if it’s a coincidence,” he said.

Barbara Burke, another member of the Historical Commission, first heard about Upton’s chamber in the 1970s, when her son, now 55, was a Boy Scout. His troop held ceremonies inside the chamber, she said. Burke, 83, said the commission should not officially side with any particular theory about the cave’s origin.

“As a town body, we cannot accept a theory until it is proven,” she said.

“Which we may never we able to do,” Patterson said.