Swimmers plied Nauset Beach -- but cautiously -- yesterday despite a shark sighting on Saturday. 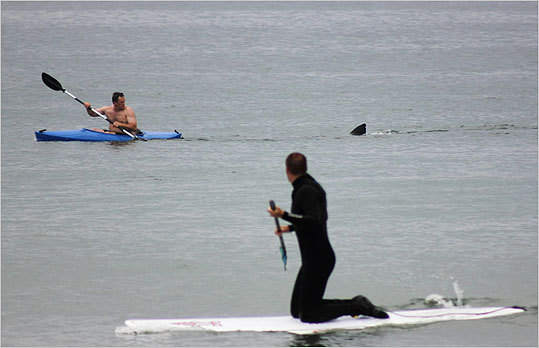 (Photo by Shelly Negrotti) A kayaker looked at the dorsal fin of an approaching shark at Nauset Beach in Orleans on Saturday.
By Adam Sege Globe Staff / July 9, 2012
Text size – +

ORLEANS — A day after a great white shark approached a kayaker at Nauset Beach in Orleans, the idea that the giant predator might still be lurking just beyond the surf deterred few beachgoers from venturing into the water Sunday.

Even as spotter planes flew overhead and lifeguards swept the horizon with binoculars, parents plunged into the waves alongside children tugging boogie boards as thousands of people packed one of Cape Cod’s most popular beaches.

Beach officials scanned the surf for an hour and a half Sunday morning before letting swimmers in the water. During the day, though no one saw any sharks, beachgoers stood up and watched when seals, the great white’s preferred meal, swam close to shore.

For some visitors, the possibility that the shark might return added to the excitement of being at the beach.

“I like that the shark is here,” said Anna Byrnes, 15, during a break from swimming. She said the shark sighting will make a good story to share with friends when she returns to Georgia after her Cape vacation.

“I’ll sure tell them that I swam with sharks,” she said.

The shark buzz on Nauset Beach began about 2:30 p.m. Saturday, when lifeguard Morgan McCarthy spotted a fin protruding from the water near a kayak close to shore. As she grabbed her binoculars for a better look, she radioed other lifeguards about the sighting.

Beachgoers crowded the shore for a better look, and lifeguards cleared the water.

The kayaker was unscathed but shaken after the close encounter, said McCarthy, 23. She estimated the shark’s size at 12 to 15 feet.

“It was right on the end of his kayak,” she said Sunday.

While most shark sightings on the Cape take place off Chatham, “Orleans has had its fair share, too,” said Greg Skomal, a shark expert with the state’s Division of Marine Fisheries.

“These are wide-ranging animals that move up and down the coast,” he explained.

Sharks primarily hunt seals, not people, but swimmers can limit the chances of an unwanted encounter by staying away from seals, he said.

“It’s not uncommon for a shark to check out any silhouette on the surface,” he said.

Saturday’s sighting was Nauset’s first of the year, said Lee Miller, beach director for the town of Orleans.

Miller said beach officials will clear the water if any sharks are sighted again.

“It’s going to be a day-to-day situation for the rest of the summer,” Miller said. “But there’s no reason to stay home.”

The shark sighting did not seem to concern Weston’s Bill Heslam, 42, who stood near the water as his 6-year-old daughter played in the sand. Heslam, an executive with Narragansett Brewing Co., said he felt reassured by the low-flying spotter planes and lifeguards scanning the water.

“I feel pretty confident in the system,” said Heslam.

“I’m keeping an extra eye out, but that’s about it,” Davan said.

On Sunday, rentals were slightly down at Goose Hummock, a kayak retailer in Orleans, according to Ashley Kalman, a sales associate and kayak instructor.

“I do have a feeling it may have dissuaded a few people,” Kalman said.

At least 10 different groups asked about sharks on Sunday, she said.

Most kayakers on the Cape paddle in protected waters, and those who choose the ocean usually stay in shallower water than sharks prefer, she said. Saturday’s sighting was the first she had heard of in the area that involved a kayaker.

Local entrepreneurs looking to profit from the sighting might take a cue from Byrne, the 15-year-old from Georgia, who suggested a T-shirt slogan: “I swam with sharks at Nauset.”