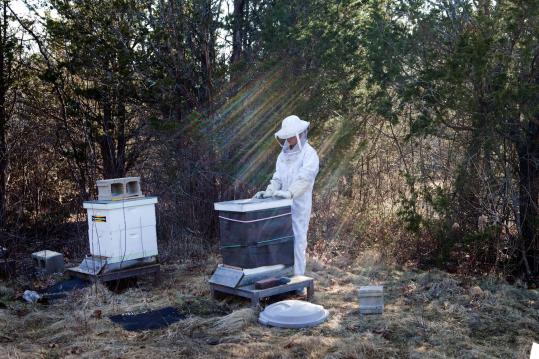 If bees in any way reflect their keeper, it’s no surprise that Orren Fox’s hives are buzzing.

If bees in any way reflect their keeper, it’s no surprise that Orren Fox’s hives are buzzing.

He keeps four hives at a family friend’s yard on the edge of the salt marsh in Newbury, just one of his many projects. The green one is the Celtics hive, filled with bees that survived the winter, and they seem a little agitated on this warm June morning. Orren, a serious sports fan, jokes mournfully that it may have something to do with the Celts’ game-seven playoff loss the night before.

He keeps four hives at a family friend’s yard on the edge of the salt marsh in Newbury, just one of his many projects. The green one is the Celtics hive, filled with bees that survived the winter, and they seem a little agitated on this warm June morning. Orren, a serious sports fan, jokes mournfully that it may have something to do with the Celts’ game-seven playoff loss the night before.

The other three hives were recently repopulated with new bees, which are busy and energetic but focused on the tasks at hand, paying little attention to their human visitors.

“This is a really mellow hive,” says Orren as he peers into one, bees flying around him.

That reflects the keeper, too. Sure, he’s protected by a beekeeper’s veil and white jumpsuit, but he’s also wearing flip-flops.

Known simply as “O” to family and friends, Orren, 15, of Newburyport, has become a bit of a celebrity in sustainable food circles, known for his Happy Chickens Lay Healthy Eggs blog (happychickens.com) and @happychickens twitter feed. He got his first birds when he was 9, after seeing the ones that his baby-sitter’s nephew was raising, and now has about 30. A couple of years ago he added bees to his portfolio.

This hobby opens outward. He makes the connections between his coops and hives, problems such as food shortages and bee colony collapse disorder, and the advantages of locally grown and raised food. His blog outlines his interests and concerns, including: backyard chickens, ethical farming, factory farming, grassfed, greenhouse, new chicks, urban farming, and slow food.

“It’s an issue we have to solve, the issue of sustainable food and making it available to everyone,” he says.

He started a farm club when he attended the Glen Urquhart School in Beverly, and was pleased to see other students keep it going. “You really can’t control everyone and make them think what you’re thinking, but I think I’ve inspired a couple of kids,” he says. “We’re going to have to be the generation to change it.”

That big-picture thinking is one reason he has been interviewed in Yankee magazine, on NPR and, way back when he was 12, on Huffington Post. His recent blog entries range from “If you are thinking of getting hens this spring” to a video of his guest appearance at a “Know Your Farmer, Know Your Food” event at the White House. He even got to check out the presidential hive. “It was a blast,” he says.

Orren handles his own press, although his mother gets copied in on the e-mails. He’s not interested in personal fame. “Thanks for doing this story,” he says when scheduling an interview. “I hope it can do something for bees. They need it.”

He was a vegetarian for a while. “After I got my birds, I got to know animals a little bit differently than I had been used to, and I decided not to eat them.” After two or three years he reverted to eating protein sometimes, he says, “but I am much more aware of what I’m eating now than I ever had been. . . . I know what I’m eating and where it’s coming from and what went into it.”

He was selling O’s eggs for $5 a dozen and tending to his chickens. Then, a couple of years ago, bees caught his interest, and he asked to attend the Essex County Beekeepers’ Association’s annual Bee School as a birthday present.

“We’re madly in love with the kid,” says Jane Wild, a West Newbury member of the group, who agreed along with her husband, Robert, to mentor Orren’s beekeeping efforts. “He’s bright, he’s extremely intelligent, he really cares.”

It’s easy to see on a barn visit in March that he still loves his chickens, rattling off not just their names and species but personal history and temperament. However, it seems bees are in the foreground now.

“It’s a cool sensation to have, like, 20,000 bees flying around and landing on you. It’s a sound like nothing I’ve ever heard,” he says.

And the occasional sting? “It hurts, but it’s really not that bad, and after 10 minutes, the endorphins kick in.”

Orren’s mother is graphic designer Libby DeLana, a partner in the Mechanica brand development firm in Newburyport. Dad is Henry Fox , proprietor of the high-end Fox Brothers Furniture Studio in town. The business was named for Orren and his older brother Will, who was involved in the chicken project early on but has now moved on, to fly fishing and fly tying, Orren says. The boys have their own business making skateboards, too, FoxBoys Longboards.

With such a high-achieving family, it would be easy to suspect stage parents. But after five minutes it’s obvious that the opposite is true: Orren runs the show when the white jumpsuits come out.

He started at a private high school in Ojai, Calif., this year, which means his father got to spend a lot of time with the chickens. Orren, meanwhile, got his fellow Thacher School students into beekeeping via hives in a nearby fruit-tree orchard. He’ll win them over to his larger causes eventually, but the initial appeal was more mundane, he says with a laugh: “They wanted to get in on it, get some honey, and get all dressed up in the suits.”

There is a hard side to agriculture, too. He recently blogged about losing Fluffy, the New Hampshire Red he got when he was 9 who, he wrote, taught him how to be a chicken keeper. “If you could all think about her for a few minutes, that would be awesome,” he wrote.

Home on school vacation in March, he had his worst day as a beekeeper. He put on his gear, picked up his hive tool, and cracked the hives open one after another, only to find the bees gone or dead, mice running wild. “They really ravaged this thing,” he says, peering at the mice in one hive. “They probably killed all the bees and ate all the wax.”

In the end, three of the four hives were kaput.

“The downside of being a rookie keeper,” he blogged afterward. “Honestly, I’m a little discouraged.”

Orren’s not the type to give up, though. Nine pounds of bees were ordered from a Georgia apiary, about 18,000 of them, arriving in May. “The local post office calls very early in the morning and says, ‘Your bees are here, could you please come and get them?’ ” his mother said.

Now the new hives are rolling. Jars of last fall’s honey are still making people happy. And the adults around Orren expect great things in the future, whether he sticks to chickens and bees or eventually moves on to other interests.

“You know he went to the White House?” asks Robert Wild, Jane’s husband. “I think he’s the type of person who might end up in the White House someday.”