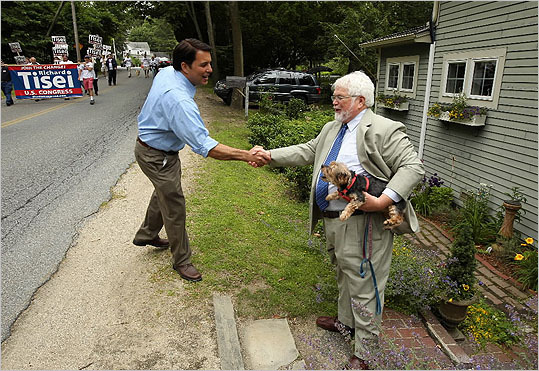 READING — It was a good week to be Richard R. Tisei.

The Republican had been looking like a longshot in his bid to unseat Representative John F. Tierney and break the Democrats’ hold on the Massachusetts congressional delegation.

But the Tierney family’s ­legal trouble, which boiled over last week when both of his brothers-in-law alleged that the congressman was fully aware of the illegal gambling operation that led to his wife’s conviction in 2010, have suddenly made the eight-term ­incumbent look vulnerable.

It’s the kind of opportunity that challengers wait for. But Tisei, 49, is an unlikely character to lead an uprising. On the North Shore campaign trail, he comes off as affable, yet toned down, his pressed shirts as neat as his slicked-back hair. He does not breathe fire. He does not speak in ­slogans.

Instead he seeks to win over voters with a promise that ­after 26 years in the Democrat-­dominated Legislature, he knows how to reach across the aisle. He is an openly gay, pro-choice Republican backed by conservative party leaders in Washington. It is an unusual combination, but he says it makes him well equipped to break the partisan gridlock.

The possibility that the ­Republican could topple a Democrat and win a House seat in Massachusetts, which last had a Republican congressman in 1997, has made the race a priority for the GOP. The party is prepared to pour money into the campaign and even sent House Speaker John Boehner for a exclusive fund-raiser at the Taj Boston hotel last month. Washington oddsmakers have promised that this is a campaign to watch.

But for the moment, the race is less about who Tisei is and more about who he is not.

Joe Coughlin, a town custodian in Reading, typically votes for Democrats, he said. But even before the last week’s accu­sations about Tierney, Coughlin had grown disenchanted with the congressman and his insistance that he did not know about his wife’s family’s gambling operations.

“I can’t believe he didn’t know,” Coughlin said of ­Tierney. “Maybe he’s been in Washington too long.”

After chatting with Tisei near the hot dog stand at the Reading Friends and Family Day in mid-June, Coughlin came away with the impression that the Republican and co-owner of a real estate business “is a level-headed guy.”

“We need a lot of people like him down in Washington,” Coughlin said. “We need new faces.”

Tierney’s office, in an effort to fight off the allegations, ­announced Monday night that he would hold a press availability Tuesday afternoon to ­“answer any questions about recent false assertions made by his brothers-in-law.”

Tisei has lashed out at ­Tierney over the scandal, but in an interview Monday, he said he will not let Tierney’s troubles dominate his campaign.

“It’s not enough to say every­thing that’s wrong with him,” Tisei said. “I have to ­explain why I’ll be a good congressman.”

He knows his good fortune. But he also knows that he is a Republican in Massachusetts, fighting against an incumbent with party muscle at his back.

The Democratic Party has ­already reserved $3.6 million in ad time for its candidates in the Boston area this fall, presumably some of it to promote ­Tierney and attack Tisei.

And with good reason. The sixth congressional district is fertile ground for a Republican upset. Scott Brown took the ­area in the 2010 US Senate special election. So did Charles D. Baker when he ran unsuccessfully against Deval Patrick for governor later that year, when Tisei was his running mate.

With more than 50 percent registered independents, the district is rife with distaste for the increasingly hostile relationship between Democrats and Republicans in Congress.

The budget battle is particularly irksome.

“The thing that really bothered me is when they almost shut the government down last August,” David Butler, owner of the Salem Trolley, which gives tours of the Witch City, told Tisei. “If you’re a Republican who can work in a Democratic state you’re already head and shoulders above the rest.”

New England Republicans are fond of saying they can reach across the aisle; for two campaigns, it has been a staple of Scott Brown’s message. But Tisei reasons that the ­approach is particularly relevant for him.

The GOP is not likely to lose control of the House this ­November. As a member of what is likely to be the majority party, he said, he will give the Massachusetts delegation, which currently has no Republicans, more of a voice.

He gave an example: when the question of funding for Hanscom Air Force Base comes up, he said “I can be a very effective congressman by being in the room.”

“The speaker’s not going to take John Tierney’s call,” he said. “Having one person who has a good relationship with the people who are going to make the decisions that will ­affect everyone’s life would be a positive thing.”

Tierney has sought to use Tisei’s connection with Washington Republicans, namely the Young Guns group, which targets those candidates who offer the greatest chance of defeat­ing Democratic incumbents, to paint his opponent as a member of the GOP’s conservative fringe.

“This is about Tea Party ­Republicans, so called Young Guns,” Tierney thundered to a crowd of supporters at a June fund-raising event. “They are ideologically extreme. My ­opponent will tell you he’s a moderate, but he’s not.”

Tisei counters that his ability to talk to the Republican leadership will help him to move the party to more moderate positions on social issues that matter to Massachusetts voters, such as same-sex marriage.

“I think I can do more for marriage equality than anybody else can right now,” he said.

Tisei inherited his ideas about bipartisanship from the politician he calls his mentor, John A. Volpe, the former Massachusetts governor and US secretary of transportation.

Inside Tisei’s Lynnfield campaign headquarters hangs an old copy of the front page of the Malden Evening News, proclaiming the 1960 Election Day victories of President John F. Kennedy, a Democrat, and two Republicans, US Senator Leverett Saltonstall, and Volpe.

“That’s been my whole ­career,” Tisei said, as he showed off the newsprint. He then paraphrased the campaign slogan of Volpe, whom he describes as his mentor: “Vote the man, not the party.”

It’s the approach that helped Tisei stage an upset victory in 1984, when at 22, he became the youngest Republican to win an election to the Legislature. He went on to win another two terms as a state representative and 10 terms as a state senator, where he served as Senator minority leader for four years.

Tierney easily won reelection in 2010, but his Republican opponent, Bill Hudak, was a far-right candidate who got himself into trouble with behavior such as planting a sign comparing President Obama to Osama bin Laden.

Tisei says that his campaign has closed the fund-raising gap significantly, but could not provide specifics. While he knows the importance of the ads that cash will buy, he boasts that anyone who meets him will simply like him better.