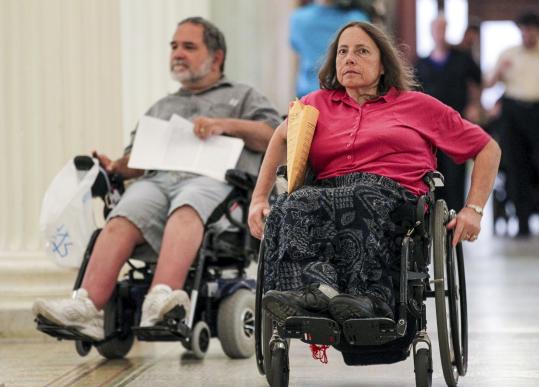 Brian Shea of Somerville and Karen Schneiderman of Jamaica Plain were at the State House Monday to protest fare hikes for The Ride. serving those with disabilities. (Aram Boghosian for The Boston Globe))
By Eric Moskowitz Globe Staff / July 3, 2012
Text size – +

By midday Monday the MBTA’s technical team had programmed a temporary fix for the problem. But even though most riders were not affected, the glitch did little to win friends for the T on a muggy day when customers were already bristling over the first fare increase in 5½ years.

“I want to apologize to our customers for any inconvenience,” said Jonathan R. Davis, the T’s acting general manager. “It was an unfortunate circumstance and something that I don’t think could have been foreseen, but we acted very quickly to fix the problem.”

On Sunday, the T raised prices 25 cents for bus riders and 30 cents for subway riders carrying reloadable CharlieCards, with all single-trip and pass prices increasing an average of 23 percent. Customers with unlimited passes are paying anywhere from $8 extra a month to ride the bus to $64 more a month to ride from the far reaches of the commuter rail.

And in stifling weather, in a holiday week, they just wanted those passes to work.

“It’s a thousand degrees down here,” said Germaine Riordan of Milton, a Red and Orange line commuter who was waiting in a long line at the customer service center at Downtown Crossing after her card was rejected before her commute. “Many of us just assumed that [the new system] wouldn’t be a problem.”

The T pass problem stemmed from a failure in the fare-gate software that caused gates to flash a “see agent” message when riders with some commuter rail monthly passes tried to use them to transfer to the subway.

That affected the 40,000 commuter rail passes issued through the T’s corporate-partnership program or purchased online, though only about half of those passholders typically connect to the subway to complete their commute, a figure probably even smaller on Monday given the holiday week, said Gary Foster, chief information and chief technology officer for the MBTA and state Department of Transportation.

Still, that caused frustration at stations where the problem was concentrated, and where employees were forced to wave riders through open fare gates at Back Bay, North, and South stations, where most morning commuter rail riders disembark.

“Funneling everyone through one gate at North Station made it feel like a pushing stampede,” said Justin Sabourin, a Beverly commuter who rides the Rockport Line to the Orange Line to reach his job as an IT manager.

Sabourin described a scene of controlled chaos as employees directed monthly passholders toward one subway gate with minimal explanation and riders more chagrined than angry. “Everyone was muttering like, ‘nice work, guys, you really screwed up,’ ” he said.

Those who took the time to visit the T’s customer service bunker in the bowels of Downtown Crossing found long lines but few answers.

“A very nice woman who tried to be helpful said that they were aware of the issue and, I’m paraphrasing, that I should just flash [the pass] or duck or piggyback [behind other customers at fare gates] until it gets fixed,” said Kristin MacDougall of Jamaica Plain, who said she was in front of a line of about 60 people at the customer service window at 8:30 a.m. “It was very hot and people were kind of confused and jaded.”

Again Monday evening, dozens of people waited in the stale, stifling corridor to speak with a customer service representative at Downtown Crossing. Many in the line were not commuter-rail riders.

MBTA spokesman Joe Pesaturo said some of the T’s corporate partners inadvertently loaded insufficient funds for employees’ passes that had become more expensive. As a result, the purchases did not go through.

That may have been what caused Roxy Rocker’s pass to be rejected several times when the Dorchester resident tried to complete her customary subway-bus commute to her job at the University of Massachusetts Boston.

“Luckily some nice T person let me through the gate,” she said, though she later “had to beg [a] bus driver to let me on.”

While many found their passes failing, others avoided the T because of the price increases. After a record 16 consecutive months of MBTA ridership growth, planners predict that 5 percent of riders will stay home, drive, or walk as a result.

A particularly steep dropoff is expected on The Ride, the federally mandated door-to-door service for people with physical or cognitive disabilities that prevent them from using the subway, bus, or trolley system. People protesting The Ride fare increase added to the chaos of the day.

The price doubled Sunday from $2 to $4 and will rise to $5 in October for customers traveling beyond the inner core — a disproportionate increase compared with what mainstream riders face, and one that advocates say will force seniors and the disabled on fixed incomes to choose among doctor’s visits, errands, and social outings.

“We’re here not to demonstrate but to mourn,” said Karen Schneiderman of Jamaica Plain, one of about a dozen Ride users and activists who gathered for a State House vigil Monday. They read e-mails from those whose lives have been affected by the fare increase.

At the Downtown Crossing service center, Monday’s lines may have been compounded by customers trying to redeem old tokens, which the MBTA will stop accepting July 20. Others were reclaiming value from expired CharlieCards; since last year, infrequent riders with automated cards from the first batches issued in 2006 and 2007 have arrived at stations and found their cards rejected.

Even everyday problems that arise on an aging system — such as door failures that caused temporary breakdowns on both the Ashmont and Braintree branches of the inbound Red Line during Monday’s morning commute — felt magnified in the aftermath of the fare increase, as riders bemoaned the T on social media.

Still, most of the half a million commuters who rely on the MBTA — which provides more than 1.3 million one-way trips on a typical weekday — traveled without incident, Davis said.

“I’m concerned that we had this issue with some of our customers, but overall I think, for the first day associated with the fare increase, that it went OK,” he said.

Travis Andersen of the Globe staff contributed to this report. Eric Moskowitz can be reached at emoskowitz@globe.com.