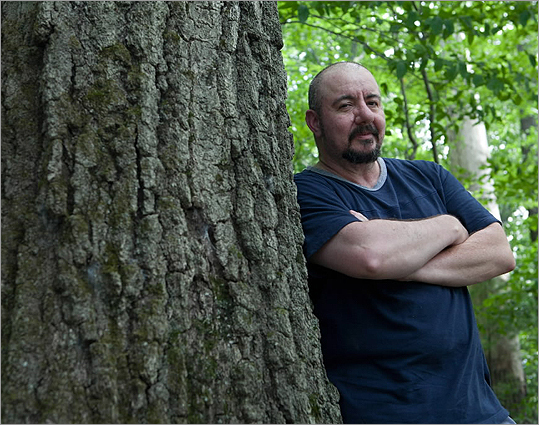 (Kayana Szymczak for the Boston Globe) Ethan St. Pierre of Haverhill, who was born a woman, said a gender change led to his firing by a previous employer.
By Adam Sege Globe Correspondent / July 2, 2012
Text size – +

When Ethan St. Pierre began the transition to life as a man a decade ago, the Haverhill resident didn’t think the change would cost him his job as a supervisor for a security company.

St. Pierre, whom his co-workers had known as a woman, had received raises and positive performance reviews, and when he told colleagues of his plans, most seemed unfazed, said Pierre, now 50.

So when his employer fired him two years later, telling him the transition had left St. Pierre unable to perform effectively, he felt stunned.

“I was such a hard worker,” said St. Pierre, now an outspoken transgender rights advocate. “And they only cared about this one thing that really had nothing to do with my job.”

Back then, transgender Massachusetts residents like St. Pierre had little legal recourse. But as of Sunday, discrimination on the basis of gender identity is illegal in the state, just as it is on the basis of race or disability.

The Massachusetts Transgender Equal Rights Act bars discrimination in employment, housing, education, and lending. The law also enables prosecutors to bring hate crime charges in attacks that target someone for being transgender.

Supporters praised the law on Sunday as a significant step that will allow transgender residents to live more openly.

“This a tremendously historic and life-changing day for transgender people across the state, and really for anybody that values fairness,” said Kara Suffredini, executive director of MassEquality, one of the organizations that lobbied for the law.

The law, which makes the state the 16th to enact a law protecting rights of transgender residents, took effect Sunday, seven months after its passage and five years after proponents first filed it.

After the votes, opponents blasted legislators for cutting off debate before those opposed could introduce additional amendments.

The leader of one group in opposition, MassResistance, repeated on Sunday his opposition to the law.

“What this bill does, it not only reinforces it [transgenderism], but it uses the force of law to force society to integrate it into society as if it were normal,” said the group’s director, Brian Camenker.

That integration concerns Camenker, who describes transgender identity as a disorder.

But i ntegration is what many advocates of the law are hoping for.

Gunner Scott, executive director of the Massachusetts Transgender Political Coalition, said that on top of its practical implications, the law makes a meaningful statement.

“It sends a message that transgender youth, adults, and our families are part of our communities and deserve the same rights as anyone else in Massachusetts,” Scott said.

As St. Pierre watched live streaming of the law’s passage last fall, he felt thrilled thinking about how many transgender people will benefit, he said. An estimated 33,000 Bay State residents identify as transgender.

Even before his transition, St. Pierre didn’t identify with women, he said. When St. Pierre learned about transgender men and realized gender transition was possible, it felt obvious to him to pursue it, he said.

“I knew exactly who I was, and to not do something about it would be to deny who I am,” he said. “There was no other way for me ... to feel comfortable in my skin.”

Before he started testosterone therapy, St. Pierre gathered his co-workers and explained his decision. His colleagues, who knew and accepted him as a lesbian woman, reacted positively, he said.

But soon, a new supervisor began repeatedly “outing” him to new co-workers, St. Pierre said. Two years into the transition, he was fired, he said.

Seeking to clarify that St. Pierre wasn’t fired for having been a lesbian, his employer specifically cited his transition, telling St. Pierre that it left him unable to work effectively, he said.

Stories like his, backers say, show the need for explicit language preventing discrimination based on gender identity.

Under the new law, agencies including the state attorney general’s office and the Massachusetts Commission Against Discrimination can investigate complaints of discrimination against transgender residents.

Under pressure from opposition groups, legislators dropped language from the bill that would have required public accommodation of transgender residents, which would have protected their choice of which bathrooms to use.

The new law will not end discrimination, said St. Pierre, who is now married and runs a website publicizing days of remembrance for transgender victims of violence. Still, he said, the law represents a welcome step.

“I’m just really happy that there are people that will grow up with this law in place,” St. Pierre said. “And hopefully it gets better from here.”