Clock ticking down on the T token

This time, the MBTA says, the token will be gone for good.

At least three times since 1919, the metal subway token — humble, venerable, good for one fare — has been retired. But it has never been killed off entirely, remaining valid as a form of payment even now, nearly six years after the MBTA sold its last token.

That was supposed to end Sunday, when the T intended to discontinue token redemption, a quiet footnote to the better-publicized fare and service changes taking effect.

But customers, hearing of the token’s demise, started bringing in their remaining stash, only to find that vending machines rejected them and station employees were unable to explain why. So T officials granted a three-week reprieve and designated sites for token redemption through July 20.

All of which prompts a few questions: Who still uses them? And where do tokens go when they retire?

Plenty of people have a few tokens, reclaimed from couch cushions and uncovered at the bottom of coin jars. A few people have many, hoarded and carefully rationed.

The final token was sold in a ceremony on Dec. 6, 2006, minutes before the last turnstiles were removed and replaced with sliding fare gates. But in a drawn-out denouement for the disk, the T set no sunset date for redemption, continuing to accept tokens as transit currency.

Some 2,000 a month have trickled in the last few years at the 345 computerized vending machines with coin slots and at the Downtown Crossing sales office. Each was good for $1.25 credit on a CharlieCard or CharlieTicket.

The tokens are shipped to the MBTA’s money room, a windowless bunker in Charlestown where 3.4 million tokens are stored in plastic bags of 5,000. The 55-pound sacks are monitored by Transit Police because of their value, worth $4.25 million in subway rides.

After July 20, they will go to the blast furnace. The T will seek bids from scrap-metal buyers interested in melting them down, saving a few for jewelry makers, said Jonathan R. Davis, the T’s acting general manager.

The volume of tokens being redeemed does not justify the cost of collecting, sorting, and safeguarding them, much less the vault space they consume.

“The era of the token has lasted a little too long,” Davis said.

Still, the token has been counted out before. It debuted in Boston on a small scale in 1837 as a “metal ticket” on private horse-drawn coach lines but disappeared by the dawn of rapid transit, said Bradley H. Clarke, president of the Boston Street Railway Association.

The Boston Elevated Railway Co., the direct predecessor to the MTA and today’s MBTA, was using millions of paper tickets each week in 1919 when it introduced what a Globe headline called “Metal Fare Disks,” on Washington’s Birthday. The El wanted to thwart the “clever palmists” stealing rides by making it look as if they were dropping paper tickets noiselessly into the ticket-chopper, only to pocket them again.

But the token didn’t last long. The following summer, the El raised fares from eight cents to 10, installed coin boxes, and instructed people just to use nickels or dimes. Later, the El introduced tokens for some streetcar lines.

The Metropolitan Transit Authority brought them back en masse in 1951, but they were hardly beloved. Columnist Elizabeth Watts derided them as “just one more gadget to clutter a woman’s pocketbook,” worthless “in a Coke machine,” and easily lost “among the bobby pins, the loose change, and the pillbox.”

The MTA’s solution? A sales strip, roughly the size of a pocket comb, that held five tokens on each side.

The Massachusetts Bay Transportation Authority, born in 1964, continued to use the old MTA tokens until Dec. 1, 1968, when fares climbed from 20 to 25 cents and it outfitted turnstiles for quarters only.

For over a decade, millions of tokens sat forlorn in 55-gallon drums in the basement of the T’s old administration building. But in 1980, they were returned to service with a fare increase, Clarke said.

Those old ones — still stamped “METROPOLITAN TRANSIT AUTHORITY/ONE FARE” — remained the T’s only tokens until 1987, when it produced 100,000 to commemorate the new Orange Line Southwest Corridor service.

So many of those were pocketed as souvenirs that they hardly put a dent in the T’s dwindling supply of 1951 MTA tokens. That prompted production in 1988 of 3 million of what we now picture as the classic MBTA token: encircled “T” on one face, subway car on the other.

Even with its imminent banishment, the token will live on affixed to cufflinks, bracelets, and key rings. Ward Wallau, whose California company Tokens & Icons holds the official license to make cufflinks from Boston, New York, Chicago, and San Francisco transit tokens, said their appeal endures as “authentic nostalgia.”

“There’s a very passionate customer in the Boston area that makes it worth my while continually to renew my license,” said Wallau, who declined to provide sales numbers but said he acquires tokens as needed from the T by the hundreds, to make the silver plated ($89.95) and sterling silver ($159.95) cufflinks sold at the MBTA’s online store and through other retailers. Homemade versions proliferate on eBay and elsewhere.

Jon Melick, an occasional subway rider from Dorchester, said he will miss using his tokens, which remind him of trips as a child from Newton to the old Scollay Square to visit his father at work.

Melick, 59, amassed several hundred tokens, buying in bulk to lock in the old price ($1) in late 2003 before a 25-cent increase, and picking up many more at a discount from another rider who erroneously thought they were invalid after the CharlieCard’s 2006 introduction.

“I could see stopping the use at stations and even at the machines,” said Melick, who will reluctantly cash in most of his rationed tokens, saving a few as mementos. “But there should be some place where you could take them” for continued redemption.

That is the case in New York, which stopped selling tokens in 2003 but still allows customers to cash them in if they visit the transit agency’s treasury office.

Chicago, on the other hand, gave riders mere months to redeem tokens after their sale ended in 1999, with the Chicago Transit Authority eventually selling all but 2,000 of its 20 million obsolete tokens for scrap.

That might make Chicago Davis’s kind of town. The T’s acting general manager may have a few forgotten tokens somewhere at home, but he is not sentimental about them. “The honest answer?” he said. “No.”

The T will continue to accept tokens at six stations until July 20: Downtown Crossing, Government Center, Harvard, Quincy Center, Riverside, and Ruggles, as well as during normal business hours at the Downtown Crossing pass office and at T headquarters, 10 Park Plaza, Suite 4730. All other vending machines have been reconfigured to reject tokens. 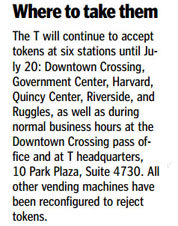