Finding may spur flurry of appeals 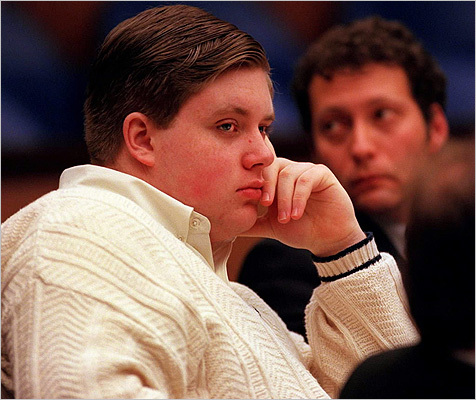 (Michael Robinson-Chavez/Globe Staff/File) Edward S. O'Brien listened to a witness during his 1997 trial in Middlesex Superior Court in Cambridge. As a 15-year-old in 1995, O'Brien killed his friend's mother in Somerville and was sentenced to life without parole.
By Peter Schworm and John R. Ellement Globe Staff / June 26, 2012
Text size – +

A divided US Supreme Court struck down mandatory life-without-parole sentences Monday for juveniles convicted of murder, ruling the widespread practice violated the Constitution’s ban on cruel and unusual punishment.

The ruling will nullify Massachusetts law, legal specialists said, and throw into question the sentences of 61 prisoners who over the past four decades were ordered to spend the rest of their lives in jail. Nationally, about 2,500 prisoners are serving life sentences without parole for murders they committed before turning 18.

In a 5-4 vote, the high court ruled that juvenile offenders younger than 18 have “diminished culpability and greater prospects for reform” and that judges should be able to consider the “mitigating qualities of youth” in sentencing, even when juveniles commit heinous crimes.

“Such mandatory penalties, by their nature, preclude a sentencer from taking account of an offender’s age and the wealth of characteristics and circumstances attendant to it,” Justice Elena Kagan wrote in the majority opinion. “Under these schemes, every juvenile will receive the same sentence as every other — the 17-year-old and the 14-year-old, the shooter and the accomplice, the child from a stable household and the child from a chaotic and abusive one.”

The decision does not prohibit life-without-parole sentences for juveniles, but it prohibits states from making them automatic, as the court noted that 28 states have done.

The far-reaching decision, which extended previous court decisions that barred harsh sentences for juveniles under the Eighth Amendment, will strike down the Massachusetts law requiring that juveniles convicted of first-degree murder be imprisoned for life without hope for parole, legal experts said.

Within hours of the court’s decision, some Massachusetts lawyers signaled their intention to challenge sentences, and advocates called for detailed reviews of each case.

“I would hope we would do everything we can to provide these individuals with an opportunity to participate in a meaningful sentencing hearing,” said Gail Garinger, the state’s child advocate and a former juvenile court judge. “If we’re trying to be true to the spirit of the ruling, we would want judges to consider any mitigating factors.”

“Perhaps science and policy suggest society should show greater mercy to young killers, giving them a greater chance to reform themselves at the risk that they will kill again,” Roberts wrote in dissent. “But that is not our decision to make.”

The court did not specify whether the ruling was retroactive or how states should comply, and the legal ramifications remain unclear. District attorneys across Massachusetts, as well as the attorney general’s office, said they were studying the ruling to determine how to proceed.

“We are currently reviewing this decision with other law enforcement to determine what impact it has on Massachusetts law and on those cases that have already been decided,” the attorney general’s office said in a statement.

In the 1990s, several juvenile murder cases prompted lawmakers to mandate that all juveniles charged with first- or second-degree murder be tried in adult court and that conviction for first-degree murder result in an automatic sentence of life without parole.

One of those cases involved Edward S. O’Brien, a 15-year-old who in 1995 killed his friend’s mother in Somerville. He was tried as an adult and was sentenced to life without parole.

Advocates said the court recognized that juvenile offenders should be treated differently than adults, and be given a chance to atone for their crimes and return to society.

“The court isn’t saying everyone should get out,” said Barbara Kaban, deputy director at the Children’s Law Center, which has lobbied against mandatory sentencing for juveniles. “They are saying they should have an opportunity to show they have been rehabilitated.”

But prosecutors and victims’ groups said violent criminals should be held fully accountable, regardless of their age, and said new hearings would be traumatic to relatives.

“It will rip open the legal finality,” said Jennifer Bishop-Jenkins, president of the National Organization of Victims of Juvenile Lifers. “Families’ lives are going to be dramatically changed by this, and in most cases they don’t even know.”

Bishop-Jenkins accused the court of overstepping its bounds, and said the majority of states “have decided these sentences are appropriate.”

Prosecutors also denounced the ruling, and vowed to fight any reduction in sentences.

“It remains the position of this office that these types of homicidal defendants should continue to serve life in prison without the possibility of parole,” said Gerry Leone, Middlesex district attorney. “We will continue to strongly assert that position on behalf of those victims whose lives were lost forever because of the deliberate, premeditated, extremely atrocious and cruel murders that they committed.”

Other district attorneys said that while the state would have to amend the existing law, the overall impact on public safety would be minimal.

“Very few juveniles were ever subject to this sentence, and those who were have no guarantee that they’ll be released one day due to this ruling,” said a spokesman for Daniel Conley, the Suffolk district attorney.

Thomas Reilly, who prosecuted O’Brien in the 1990s, said it would be unfortunate if the ruling benefits O’Brien and dangerous if he is somehow released.

“Janet Downing suffered 97 stab wounds at the hands of Edward O’Brien,’’ Reilly said. “You don’t chalk that up to being a teenager. You can’t excuse something like that; you can’t.’’

Reilly called O’Brien a “potential serial killer” and said the court “lost sight of reality” in its ruling.

O’Brien’s father, Edward P. O’Brien, said his son’s lawyers are reviewing the ruling and have instructed him not to comment on the strategy they will follow in future court filings.

The attorney for Joshua Fernandes, who was sentenced Friday in Suffolk Superior Court, said she will seek relief in court as soon as she reviews the complex high court ruling and decides on the best tactic to employ. Rosemary Scapicchio said she challenged the mandatory sentencing law at trial, and she interprets Monday’s ruling as applying to all juvenile life sentences, no matter how many years ago the murder took place.

“The nation’s highest court has now decided that the Eighth Amendment trumps any state law imposing such a sentence,’’ she said. “Massachusetts imposes such a sentence.’’

Fernandes was 16 when he killed Nicholas Fomby-Davis in 2010.

“We will go into court either as a motion for a new trial indicating we should have been able to get this [brain development science] in front of the jury, or go in on a resentencing,’’ Scapicchio said. “Right now, I don’t know which way would be more beneficial for Mr. Fernandes.’’

Other lawyers said that that while the specifics are unclear, juveniles sentenced under the nullified law are entitled to some remedy.

“Somehow, this is going to have to get into the Massachusetts courts,” said Ingrid Martin, a lawyer who represents Joe Donovan, who has served 18 years in prison after being convicted in a 1992 stabbing murder. “We definitely believe this will open new avenues and new arguments.”

Nationally, an estimated 2,500 prisoners are presently serving life sentences without parole for crimes they committed before turning 18, according to Human Rights Watch. Alison Parker, director of the group’s United States program, said the group considered the ruling a partial victory, though it hoped the court would rule that no juveniles should be sentenced to life in prison without parole.

“In our opinion they didn’t go far enough, but they did recognize that judges will always have to take into account that it is a child standing before them,” she said. “It’s a very important ruling.”

More than 80 percent of juveniles serving life terms without parole received mandatory sentences, she said. Courts will now have to hold new sentencing hearings, she predicted.

“Juveniles have diminished culpability and more of a capacity to change,” she said. “They have to be treated differently in the criminal justice system.”

The ruling was based on two cases — Miller v. Alabama and Jackson v. Hobbs — involving 14-year-olds who were convicted of murder. Bryan Stevenson of the Equal Justice Initiative, which represented the 14-year-olds, said the ruling will affect hundreds of individuals whose sentences did not take their age or other mitigating factors into account.

“These cannot stand,” he said. “It’s cruel to say to any child you’re only fit to die in prison.”

David Abel, Jeremiah Manion, and Brian R. Ballou of the Globe staff and correspondent Wesley Lowery contributed to this report. Peter Schworm can be reached at schworm@globe.com. Follow him on Twitter @globepete.