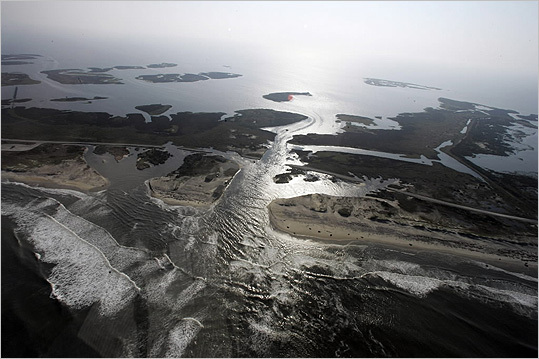 As temperatures are projected to climb, polar ice to melt, and oceans to swell over the coming decades, Boston is likely to bear a disproportionate impact of rising sea levels, government scientists report in a new study.

The seas along the East Coast from North Carolina to New England are rising three to four times faster than the global average, and coastal cities, utilities, beaches, and wetlands are increasingly vulnerable to flooding, especially from storm surges, according to the US Geological Survey study published Sunday.

“Cities in the hot spot, like Norfolk, New York, and Boston, already experience damaging floods during relatively low-intensity storms,” said Asbury Sallenger, a Geological Survey oceanographer and lead author of the study in the journal Nature Climate Change. “Accelerated sea-level rise,” he said, will add to “the height that storm surges and breaking waves reach on the coast.”

The findings come as Boston and Massachusetts officials are taking the first of a range of responses to the threat of rising seas. The report did not project how much levels would rise in the Northeast, but globally, oceans are projected to increase between 2 feet and 6 feet by the end of the century, and as much as an additional 5 feet during the heaviest storms. Climate scientists say such storms are likely to increase in intensity and frequency over the coming decades.

In Boston, officials have begun mapping low-lying areas and critical systems that are most likely to be inundated. The maps show that if sea levels rise just 2.5 feet, it could take little more than a Nor’easter to put much of the Back Bay, East Boston, South Boston, Chelsea, Cambridge, and elsewhere underwater, including much of Logan International Airport and the financial district.

As a result, the Boston Water and Sewer Commission will begin inspecting hundreds of miles of sewers, storm drain connections, pumping stations, and other utility systems this summer to assess what needs to be done to protect them from rising seas. The Boston Redevelopment Authority, as part of its new climate adaptation plan, recently began requiring developers to fill out a questionnaire about their awareness of the potential impact of climate change and whether it is influencing their building plans.

The city, which now requires its departments to consider sea-level rise in planning decisions, has also launched a “green ribbon” commission to build support in the private sector for blunting climate change. The commission will advise the city and large companies on ways to cut greenhouse-gas emissions, increase energy efficiency, and prepare for rising seas.

“There’s an absolute need for developers to be educated and aware of their vulnerabilities and the risks that they’re taking by building in Boston,” said Kairos Shen, the city’s chief planner.

In recent years, state officials have changed codes to require developers building in areas prone to coastal flooding to erect the lowest floor of any new development or substantial renovation at least 2 feet above where water levels now rise during the most powerful storms. The state also now requires development projects in flood zones to be able to withstand sea-level rise for the life of the buildings.

State officials have been working with the federal government on identifying coastal areas vulnerable to flooding and with local officials to provide developers incentives to avoid building in hazardous areas, and if they do, to build at higher elevations.

“The threats of sea-level rise are significant,” said Bruce Carlisle, director of the state Office of Coastal Zone Management.

Some major institutions in low-lying areas have already taken action to protect their buildings. Among them is the New England Aquarium, where flooding can occur from moderate storm surges.

The aquarium, built beside Boston Harbor, has already moved its electrical systems from its basement to higher floors and elevated the harbor walk on its periphery to account for rising seas.

The new study used tide gauge data to show that the region’s waters have risen between 2 millimeters and 3.7 millimeters per year over the past two decades, compared with the global average of 0.6 millimeters to 1 millimeter per year.

The report projects that this difference will continue when seas start to rise at an accelerating pace as global temperatures increase, land-based ice melts, and oceans increase in volume as they warm. Differences in ocean currents, temperatures, and salinity, among other factors, can cause sea levels to be higher or lower in some regions.

“The real take-home is that we need to recognize more clearly how variations can occur with sea rise around the country, and that policymakers need to factor that into their concerns,” Sallenger said.

Rob Young, a professor of coastal geology at Western Carolina University in North Carolina and author of a book, “The Rising Sea,” said the study echoes others that have forecast accelerating sea-level rise in the Northeast.

“This paper reinforces what the scientific community has been saying for the past few decades: that sea level is rising faster in the future, and that we should be prepared for that, and the longer we wait, the more expensive it’s going to be to respond,” Young said.

Bob Dean, a retired professor of civil and coastal engineering at the University of Florida in Gainesville, noted the findings may offer hope to other parts of the United States where the report showed little to no evidence of accelerating sea-level rise, such as in the Southeast and the West Coast.

He added that it is also possible that the study may be highlighting a cycle, rather than a trend. “We should be careful with the data to make sure this is not a short-term change,” he said.

Ellen Douglas, an assistant professor of ocean sciences at the University of Massachusetts in Boston who has mapped the potential consequences of rising seas on the city, said the findings are alarming.

She noted that greenhouse-gas emissions are higher than the highest estimates by an international panel of scientists who monitor climate change, with little promise of substantial reductions anytime soon.

And she said Boston has already seen its seas rise by nearly a foot over the past century.

“The future flooding we’ve mapped ... all along the coastal fringe of Boston Harbor could happen even sooner than we’ve been anticipating,” she said. “Ultimately, this could mean transportation disruptions, storm drain backups, basements flooding, and a lot of heartache for those who work and live in Boston.”