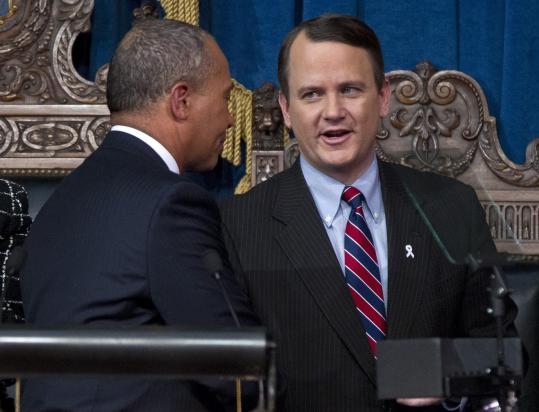 The questioning of Lt. Governor Timothy P. Murray by US and state investigators was less formal than before a grand jury.
By Sean P. Murphy and Andrea Estes Globe Staff / June 15, 2012
Text size – +

Lieutenant Governor Timothy P. Murray was questioned under oath last week by state and federal investigators looking into the Chelsea Housing Authority scandal, amid an active grand jury probe into potentially criminal fund-raising for Murray by the disgraced former head of the agency, Michael E. McLaughlin.

The rare questioning of one of the state’s top elected officials took place in an office rather than a courthouse, allowing Murray to avoid an appearance before a grand jury like other witnesses. Murray’s lawyer, former US Attorney Donald K. Stern, was present.

“Lieutenant Governor Murray . . . answered their questions regarding Michael McLaughlin,’’ said Murray campaign spokesman Scott Ferson. “The investigators asked the lieutenant governor not to discuss the details of his interview, and he intends to respect that request.’’

But others who have been questioned in connection with the joint state-federal investigation said prosecutors have focused on McLaughlin’s political efforts on behalf of Murray, who has downplayed his ties to McLaughlin even though the two exchanged nearly 200 cell phone calls with McLaughlin in 2010 and 2011.

McLaughlin, who as a federal employee was prohibited from most political activity, resigned as Chelsea housing director last year after the Globe revealed that he deliberately concealed his inflated $360,000 salary from state regulators.

Another person who testified before the grand jury was asked whether former aides to McLaughlin solicited cash donations from other housing authority employees on behalf of Murray and other politicians. This person, who spoke on condition of anonymity because grand jury proceedings are secret, testified that authority employees were pressured to donate to Murray because he had clout within the administration of Governor Deval Patrick over housing issues.

The person also told investigators that employees and tenants of the Chelsea Housing Authority were coerced to attend a rally for Murray and Patrick in Everett shortly before the election in 2006.

In response to Globe questions, Ferson, the Murray spokesman, released a statement distancing the lieutenant governor from McLaughlin’s actions.

McLaughlin resigned last November under pressure from Patrick, who said he was “boiling’’ over reports that McLaughlin had become one of the highest paid public housing employees in the nation. On the day he resigned, McLaughlin also had checks cut for more then $200,000 for what he said was unused vacation and sick time even though a Globe review of cellphone records showed he worked only 15 full days in Chelsea in all of 2011.

“As the lieutenant governor previously stated, he is disappointed and angered by Mr. McLaughlin’s abuse of the public trust,’’ said Ferson. “After the administration found out about Mr. McLaughlin’s actions, they acted swiftly to remove him from his post and have introduced numerous reforms to ensure something like this can’t happen in the future.’’

The investigation into McLaughlin’s political activities stems from a January request for a review by Murray to the Office of Campaign and Political Finance. After an initial investigation, the office turned the case over to Attorney General Martha Coakley for further investigation.

The questioning of Murray by both federal and state investigators was less formal than an appearance before a grand jury, at which witnesses are not permitted to be accompanied by lawyers. Murray was accompanied during his questioning under oath by Stern, whose firm has already been paid $10,000 from Murray’s campaign funds.

The Chelsea scandal has cast a long shadow over Murray, figuring in his mysterious high-speed crash last Nov. 2 when he crashed his state-owned Crown Victoria at speeds that reached 108 miles per hour. He later said he had gone out for the drive after he could not sleep because of concerns over McLaughlin. Murray retained longtime political adviser Ferson to help field media inquiries about the crash and McLaughlin.

Ferson has denied that McLaughlin was a fund-raiser for Murray, telling the Globe in January, “From what we saw, [McLaughlin] did not host a fund-raiser or have his name attached to anything concerning a fund-raiser.’’

But numerous people involved in Merrimack Valley politics have told the Globe that they attended events where McLaughlin was raising money and organizing political support for Murray.

“Mike was always the speaker at those events,’’ said one Merrimack Valley political organizer. “I don’t understand what the big deal is.’’

For his part, Murray helped McLaughlin’s son, Matthew, obtain a $60,000-a-year job on the state Board of Appeals, which hears appeals from drunk drivers who have lost their licenses. The younger McLaughlin was later fired.

Political consultant Michael Goldman, who advised McLaughlin as the Globe was preparing an article about his salary, testified before the federal grand jury this week. Goldman was asked about a column in the The Lowell Sun he wrote a few days after the Globe revealed McLaughlin’s true salary, defending McLaughlin as “a warrior from the old school.’’ Goldman later acknowledged that McLaughlin asked him to write the column.

Goldman declined to comment on his testimony, but he has said he has severed the relationship with McLaughlin. McLaughlin also declined comment.