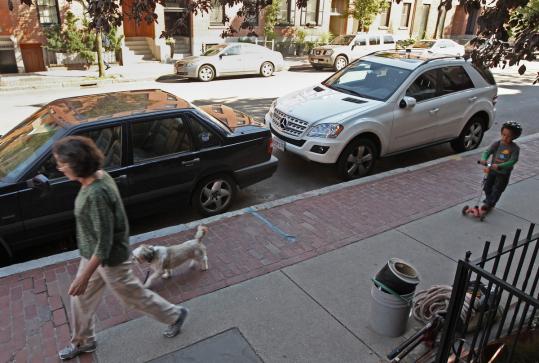 The two parking spaces closest to the South End’s Wholy Grain cafe are just like thousands of others in Boston: patches of public asphalt hard against the curb, designated for vehicles. By this time next year, they could be a park.

City planners are refining a pilot program to turn parking spaces here and in three other neighborhoods into “parklets’’ - petite, three-season patios, with benches and planters atop platforms built flush with the sidewalk.

The program, boston.PARKLETS, follows the lead of San Francisco, which boasts 30 parklets, and New York, which unveiled the first of what it calls “curbside seating platforms’’ in 2010.

They are part of the growing movement to reclaim urban space for pedestrians and bicyclists and promote public transit. Mayor Thomas M. Menino has proclaimed “the car is no longer king,’’ citing the environmental, aesthetic, and health benefits.

It remains to be seen how willingly Bostonians, known for fiercely coveting and protecting their parking spots, receive the parklets.

Vineet Gupta, planning director for the Boston Transportation Department, said the city will work with merchants and neighbors to find appropriate spots, with the first parklets probably appearing next spring. They would scarcely put a dent in the city’s 8,000 metered spaces and untold thousands of unmetered and resident-permit spots, but they would enliven areas with heavy foot traffic otherwise lacking in public amenities, he said.

The city will pay to design and install the first parklets, estimated to cost $12,000 each, while asking businesses, nonprofits, and civic associations to sponsor maintenance of plantings and furniture.

Wholy Grain owner Ken Hassett agreed to be the first partner, while the city is scouting sites in Jamaica Plain, Mission Hill, and Allston. Should the program grow, local businesses or groups would be asked to pay for installation as well as maintenance.

As a business owner, Hassett said he likes adding a colorful, informal swath of outdoor seating near Wholy Grain, tucked into the first floor of a classic brick rowhouse at Shawmut Avenue and Hanson Street. As a resident who lives a few paces away, he likes what it promises to do for pedestrian life.

“Some of the people I’ve spoken to so far were slightly hesitant about, ‘Oh, we’re going to lose a parking space,’ ’’ Hassett said. “But then they began to think about it and think what a novel idea it would be.’’

Cambridge is exploring a similar program while ironing out legal issues such as whether a partner restaurant across the sidewalk could serve alcohol.

“To be able to go outdoors in the street and have some lawn furniture you could use or whatever, we think that has great potential,’’ said Richard C. Rossi, Cambridge’s deputy city manager, envisioning them as “pop-up cafes’’ and shared backyards for the public.

Boston is developing its parklets - as open to the public as any park, but removable in winter -at the same time officials are eyeing orphaned or awkward road segments to create larger and more permanent “pocket parks.’’

In Chinatown, the slim island known as Phillips Square is a triangle containing a utility box and a streetlight, framed by Harrison Avenue and Chauncy and Essex streets. The city plans to expand the island to a plaza and close one side of the triangle to traffic, said Kairos Shen, planning director for the Boston Redevelopment Authority. He likened it to a miniature version of what New York has done in closing Broadway to cars at Times Square.

The city has budgeted $350,000 for that park and a similarly permanent conversion of roadway to plaza in the North End, where the alley known as Bartlett Place widens to meet Salem Street outside Terramia Ristorante, Shen said.

Joanne Massaro, Boston’s public works commissioner, said the city is hunting for similarly orphaned blocks, “areas that are not exactly no-man’s land but where we think we could create unique gathering places.’’

The parklets - which would occupy one to three standard 8 1/2-by-20-foot spaces - are descended partly from a two-hour demonstration in San Francisco in 2005, when Rebar, an art and design firm, plugged quarters into a meter and rolled out sod, a bench, and a potted tree to occupy a parking spot in a neighborhood lacking green space.

A photo went viral and spawned Park(ing) Day, an international event that now enlivens nearly 1,000 spots in 180 cities, Boston included, on the third Friday in September.

“It’s predicated on the idea that a metered parking space is an offer for a short-term lease on some pretty valuable urban real estate, and you could actually rent that space to provide a variety of services or fulfill a variety of unmet needs,’’ said Matthew Passmore, a principal at Rebar.

The project’s popularity led San Francisco to develop a formal program for more lasting parklets. The city has 30 in place, eight more permitted, and 20 being designed, with a roster of merchants and business associations on a waiting list, said Kay Cheng, an urban designer and planner for the city.

Near Wholy Grain on Thursday, pedestrians were supportive.

“Any added common outdoor space is a great thing,’’ said Ashley Miller, 28, a Jamaica Plain resident who works nearby and who would not mourn lost parking spaces. “[If] you live in a city, you have to sacrifice your car sometimes.’’

Michele Corkery, 47, said many supported the idea at a Union Park Neighborhood Association meeting this week.

“Losing two parking spaces to gain another outdoor area is a good idea,’’ she said.

But Cynthia Chace-Macniel, who lives a few blocks away, was dismayed, saying the South End already has pocket parks.

“We desperately need parking spaces,’’ said Chace-Macniel, 80, wondering why anyone would want to sit so close to parked cars. “That’s a lose-lose.’’

Globe correspondent Zachary T. Sampson contributed to this report. Eric Moskowitz can be reached at emoskowitz@globe.com.