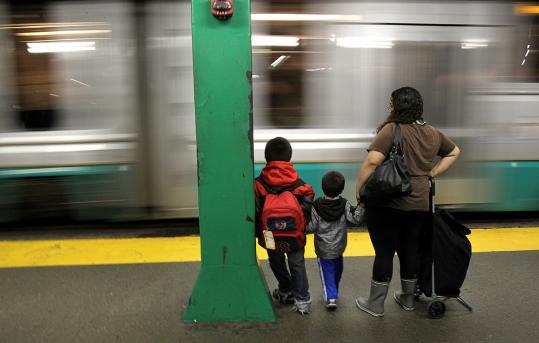 The report said MBTA riders should be prepared for 20 percent more company by the end of the decade. (SUZANNE KREITER/GLOBE STAFF)
By Eric Moskowitz Globe Staff / June 14, 2012
Text size – +

By the end of the decade, Boston’s subways could grow so packed that trains would roll past waiting commuters, unable to accommodate more riders, a new report from a leading land-use think tank warns.

Surging T ridership and booming construction around transit stations, the study from the Urban Land Institute found, are poised to overwhelm the MBTA, potentially limiting future development and slowing the regional economy.

The findings in the report, scheduled for release Thursday, inject additional urgency to the T’s financial crisis and come amid debate on Beacon Hill debate over how much to invest in public transportation. The MBTA shoulders the biggest debt burden of any transit agency in the nation.

The 390 million transit trips in Greater Boston last year were the most since 1946, and the T has registered a record 15 straight months of ridership growth. Fare increases scheduled for July 1 could dampen the numbers temporarily.

But authors of the study from the Boston branch of the institute, a national nonprofit, issue this warning: Riders who think it is crowded now should be prepared for 20 percent more company by the end of the decade.

Developers are clamoring to build in areas near public transit, and real estate trends, state and local policy, gas prices, and highway traffic are causing demand for the MBTA to grow faster than the regional population.

But without investment in more subway cars, better power and signal systems, and other tools to relieve MBTA crowding, scattered congestion will become widespread, with riders at “hot spots’’ unable to board because cars are too full, and with backups and bottlenecks causing delays systemwide, according to the “Hub and Spoke’’ report.

“Congestion relief has long been a priority for highway spending; it is past time to recognize that addressing congestion is equally important for the transit system,’’ wrote lead author Stephanie Pollack, associate director of Northeastern University’s Dukakis Center for Urban and Regional Policy.

Some 30,000 housing units and 45 million square feet of commercial space are planned or under construction within a half mile of rapid transit and commuter rail stops, in places like the South Boston Waterfront and Kendall Square in Cambridge.

In Assembly Square in Somerville, construction is underway on a $1.5 billion redevelopment to turn a former industrial zone into 2,100 residences, a hotel, and more than 2 million square feet of office and retail space. The linchpin is a new Assembly stop that the state is shoehorning onto the Orange Line between Sullivan and Wellington stations.

“What’s happening in Boston and other major urban markets is people want to live closer to the city,’’ said Don Briggs, lead developer of Assembly Square and senior vice president of Federal Realty Investment Trust, based in Maryland. “They want to be connected by trains. They want to drive their cars less. They want to live in great urban amenity-filled areas. And Boston is frankly a great canvass.’’

Baby boomers and their children are driving the trend, and it will intensify over the next 20 years, he said.

About 470,000 residences and 880,000 jobs are clustered on the 5 percent of land in Eastern Massachusetts within a half-mile of an MBTA station, according to a companion report from the Metropolitan Area Planning Council, also scheduled for Thursday release. The council analyzed zoning and land use around every rapid transit and commuter rail station and identified potential for developers to fill in another 75,000 residences and space for 130,000 jobs by 2035.

But the mere presence of the T is not enough. Without improvements for capacity - larger train sets, more frequent service - development will stall or scatter toward farther-flung sites that put more cars on the road, increasing highway congestion and greenhouse gas emissions, said Pollack and Timothy G. Reardon of the planning council.

The reports are meant to reframe the debate over whether to spend scarce infrastructure dollars extending the T to new communities or repairing the aging system. The MBTA has a repair and replacement backlog exceeding $3 billion that grows faster than it can afford to cross old problems off the list.

But replacing cars dating to the 1960s and power systems a century old is about more than safety and aesthetics. The Orange Line has trouble keeping enough balky cars in service to meet demand; the Green Line’s electrical system and fleet cannot support the number of three-car trolleys that ridership otherwise dictates.

“These are not sexy things,’’ Pollack said. “Telling the public that we need to spend billions of dollars for repairs sounds unnecessary.’’ But the public might be more receptive to spending that money if they knew it would bring more frequent and reliable service.

“I like the angle of equating it to congestion,’’ Davis said. “If we want to grow the economy in the Greater Boston area, we’re going to need to have the corresponding transit capacity necessary to get people to where they’re going and where they work.’’

Transit is not financially self-sufficient, but is universally subsidized as a public good with economic, environmental, and quality-of-life benefits, Pollack said. The size of the subsidies varies, as do the sources. Governor Deval Patrick’s administration has asked lawmakers to consider raising the gas tax for the first time in two decades or contemplate other sources of revenue for transit and for the state’s deeply indebted highway system, something legislators have indicated they will debate next year.

Congestion is driven by more than development downtown. Employers are squeezing more workers onto existing real estate. Between 1993 and 2010, square footage in the Longwood Medical Area grew by a third, but the number of employees and students nearly doubled. And communities along the commuter rail as varied as Lincoln and Lowell are guiding new housing, shopping, and offices near stations. That leads to heavier foot traffic at downtown stations, given the T’s hub-and-spoke design. At Park Street Station, Richard Feeney of Brighton shuddered at predicted growth.

“At its current operating capacity, I don’t think the heart of downtown can handle it,’’ said Feeney, 32, adding that the surge of people packing onto full cars as the doors close is harrowing and even dangerous.

Past investment built a robust transportation system that enabled Greater Boston to “keep the needle moving forward’’ even in difficult economic times, said Richard A. Dimino, president of A Better City, which advocates for large employers such as hospitals and financial institutions on transportation issues.

But that system needs to be maintained, Dimino said. “It’s not just a matter . . . of safety and reliability. It’s a matter of our economic future.’’

Globe correspondent Zachary T. Sampson contributed to this report. Eric Moskowitz can be reached at emoskowitz@globe.com.