Maynard’s schools have been losing students for years, but now the town is trying to lure them back 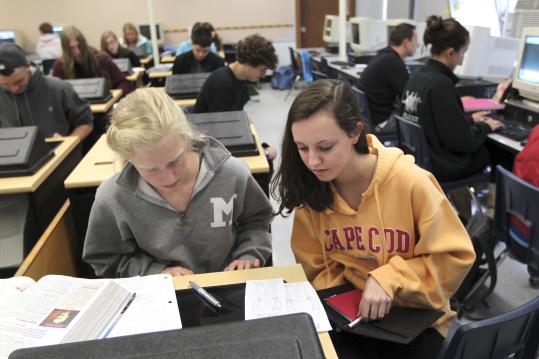 When Maynard opens the doors to its new high school in the fall of 2013,it will hold 420 students.

If the town can fill it.

Maynard has been losing droves of children and teens to neighboring communities in recent years, with some moving out of town and others enrolling in other districts through school choice programs. Officials are hoping to reverse the trend through a number of new education initiatives, including a Spanish immersion program and an increased focus on math and technology.

“Ten years ago, we had more people choosing into Maynard schools, and then about five years ago it flipped,” said Superintendent Robert Gerardi, who has been on the job for a year. “We had more students choosing out, and fewer choosing in, and we felt that we really needed to address that.”

Despite the town’s population of more than 10,000, Maynard High School had only around 60 seniors in this spring’s graduating class.

Gerardi said that 25 percent of the children born in town move out before they even begin kindergarten, and the school district loses more at the start of middle school and high school. During this school year, 85 local students opted to attend schools outside of the district, while 15 students from elsewhere attended classes in Maynard, resulting in a net loss of $258,000 in funding.

Gerardi and some other Maynard officials and residents acknowledged that the town’s schools are perceived by some as weaker than those in surrounding communities. Maynard is sandwiched between Hudson and three regional school districts, Acton-Boxborough, Nashoba, and Lincoln-Sudbury.

Maynard is the smallest of the five school systems, and it ranks at the bottom of the group for its four-year graduation rate, SAT scores, and the percentage of students scoring at least proficient on both the English and math MCAS exams.

But, Girardi noted, the town has a higher percentage of low-income students than most of the other districts, and still sends 84.3 percent of its graduating seniors to two- or four-year colleges, ranking Maynard squarely in the middle of the five school systems.

“We’re surrounded by more affluent communities. Our students have faced different challenges with achievement,” Gerardi said. “It says a lot about our school district that our students have similar college attendance rates as other schools that are considered very high performing.”

Stephen Gregg, a Maynard resident with a daughter in third grade, said he’s been happy with the local schools and doesn’t think they’re the real reason some people leave town.

“You look for reasons to leave if you want to leave,” Gregg said. “The big reason people want to leave is, it’s like the Jeffersons, moving on up. You can get a bigger piece of land, a bigger house. They want what they think is more.”

Mary Brannelly, a realtor and former member of Maynard’s School Committee, said families sometimes move out of town before they even give the local schools a chance. When families come to her to sell their houses, she said, she sometimes finds herself risking a commission by listing all the positive attributes of the community.

“We’ve got small classes, we’ve got wonderful educators, and the kids are much more likely to get the support they need,” Brannelly said. “They can participate in sports, in the band, in the plays, the community service piece. It’s much more difficult when you have a larger population.

“I’m constantly thrilled at the education we provide our students,” Brannelly added.

“If you measure us by test scores alone, our surrounding communities certainly outscore us,” acknowledged Amy Rebecca Gay, the School Committee’s chairwoman. “If you look at education with a broader lens, thinking of the whole child, the community, athletics, arts education, then I think we can compete very well with our surrounding communities. But those other things are harder to quantify.”

Maren Calzia, copresident of the Maynard Family Association, said the people who bad-mouth the schools aren’t able to enumerate their grievances.

“They’ve never given me a specific example or reason,” said Calzia, whose daughter isn’t yet in school.

Maynard’s outflow of students is the opposite of the problem faced by some suburban communities, whose officials view additional students as a potential drain on tax dollars. But Gerardi said having more students in Maynard would simply fill empty seats and wouldn’t require the schools to hire more teachers.

“If we have a class that’s only half full, then we can fill up that class with no additional cost,” Gerardi said. “It helps us to become more efficient.”

The new high school will serve grades 8 through 12, with room for 420 students. Maynard had about 370 students enrolled in those grades this year.

Thomas Scott, executive director of the Massachusetts Association of School Superintendents, said it’s not uncommon for communities to lose students to wealthier neighbors. The trend can be difficult to reverse, he said, because the school district losing the students usually lacks the resources of its neighbors.

But Gerardi and Maynard officials are hoping the district’s new initiatives will stem the tide at a low cost. The Spanish immersion program will be revenue-neutral next year because of a teacher retirement, and it will make Maynard one of the few districts in the state to have a foreign language immersion program. Gerardi said 42 parents expressed interest in 25 slots for next school year.

Gerardi said the total cost of new initiatives being implemented in the fall — including adding a Chinese cultural program, hiring math and technology coaches, and expanding the high school’s television production program — will be around $300,000.

Gregg, the Maynard parent, said the new programs are just enhancements to “what is already a really good school system.

“I see my daughter getting everything I would want her to have,” he said. “If we do more, that’s icing on the cake.”

Calvin Hennick can be reached at calvinhennick@yahoo.com.