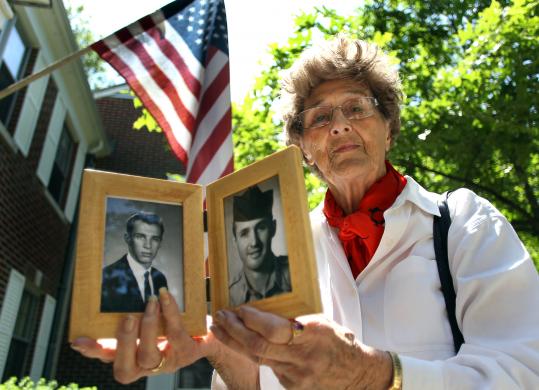 Ask the average American adult what war the country was fighting 50 years ago today, and most would remember without difficulty: Vietnam.

But ask who was that war’s first casualty and most people would draw a blank on Richard B. Fitzgibbon Jr., of Weymouth, who was killed on June 8, 1956, the first acknowledged American service death in the conflict. And even fewer people would know that Fitzgibbon’s son, Richard III, incredibly also lost his life in Vietnam, nine years after his father.

As the United States begins to commemorate the 50th anniversary of the Vietnam War with events and ceremonies honoring those who served, the Fitzgibbons are in a rare place in the long history of the conflict. One of only two confirmed father-son tandems to die in the war, their names are etched on the wall of the Vietnam Veterans Memorial in Washington, D.C., as well as on a more modest stone in the Vietnam Memorial Park in Weymouth.

But it took some effort — over 15 years, in fact, by his sister and others — to get the elder Fitzgibbon’s death officially recognized as a war casualty.

These days, Alice DelRossi, of Stoneham, often finds herself drawn to the past, lingering over pictures of her brother and nephew, reading newspaper clippings and entries in books about the war.

“I look back and read about them every day,’’ she said, her voice strained with emotion. “It doesn’t get any better.’’

The exact start of the Vietnam War is hard to pinpoint, which is the primary reason for the difficulty in getting Fitzgibbon’s death recognized. The conflict had its roots in both Vietnam’s quest for independence from France after World War II and the Cold War. American military advisers were first sent in the mid-1950s to support South Vietnam against the communist North. In 1961, the number of military forces sent to assist the South Vietnamese was increased, and by 1968, the United States had more than 500,000 troops there, fighting an undeclared war that eventually took more than 58,000 lives and divided the country.

When the Vietnam Veterans Memorial was being built with private funds in the early 1980s and the names of those killed were being compiled, Jan. 1, 1961, was used as the starting date to qualify for placement.

DelRossi, 85, knew that her brother’s name belonged there as well.

“People didn’t know,’’ she said of his death. “It wasn’t published in any paper at the time.’’

She also wanted everyone to know that both her brother and his son had lost their lives in Vietnam. “People were shocked; they told me that can’t happen,” she said.

After years of knocking on countless doors and asking anyone and everyone in political office for help, DelRossi, assisted by her son, also named Richard, and other family members, finally prevailed in 1999, when her brother’s name was sandblasted onto the black granite memorial known to many veterans simply as “the Wall.’’

US Representative Edward J. Markey, Democrat of Malden and one of those people DelRossi enlisted into her cause, had persuaded Department of Defense officials, who supplied the casualty lists to the memorial committee, to recognize that US military advisers were in Vietnam as of Nov. 1, 1955. That qualified the elder Fitzgibbon for inclusion on the memorial, which lists him as the first casualty of the war.

“I just wanted to have his name on that slate in Washington,’’ she said. “It wasn’t easy and I wondered if it was worth it, but I did it for my mother.’’

That recognition also meant a lot to Fitzgibbon’s only brother, John, 83, who lives in Newmarket, N.H. “I had looked up to him ever since I was a kid,’’ he said recently. “He was a terrific guy, honest and straightforward, and he could take care of anything that came along.’’

Air Force Technical Sergeant Richard Fitzgibbon Jr. grew up in Stoneham, the oldest of nine children. He served in the Navy in World War II, receiving a Purple Heart, then, after many years as a stationkeeper assigned to air stations in Squantum and South Weymouth, the expert aviation mechanic was recruited by the newly formed Air Force. He and his family were living in North Weymouth when he was sent to Vietnam as a military adviser.

But enemy fire did not kill the aircrew chief; a deranged fellow airman shot Fitzgibbon as he was handing out candy to local orphans in Saigon. He died 13 days before his 36th birthday.

Alice DelRossi said bitterly that Air Force officials knew that the man who killed her brother was mentally unstable but did not remove him from duty. “If someone in the government had done their job, my brother would not have been killed,’’ she said.

When her nephew joined the Marines, his mother, Eunice, begged him not to go to Vietnam. But he wanted to connect with the place where his father had died, and no one could dissuade him, DelRossi said.

Lance Corporal Richard Fitzgibbon III, who graduated from Weymouth High School in 1962,was killed in combat on Sept. 7, 1965, in Quang Tin. He was 21.

The family was heartbroken, DelRossi said, and her mother, Louise Nagle Fitzgibbon, took the loss especially hard. “There was not much you could do about it but pray a lot, and stay together,’’ she said.

The Weymouth Vietnam memorial lists the Fitzgibbons as the only father and son killed in the war, but since the monument was erected, officials in Washington have learned of at least one other set.

Last month, President Obama proclaimed Memorial Day as the official start of the United States commemoration of the Vietnam War, and he urged the nation to participate in events honoring those who fought. The commemoration period will conclude in 2025, 50 years after the fall of Saigon.

“While no words will ever be fully worthy of their service, nor any honor truly befitting their sacrifice, let us remember that it is never too late to pay tribute to the men and women who answered the call,’’ he said.

Richard DelRossi, 62, who battled to get his uncle’s name on the Wall, said most Vietnam vets appreciate that the country is finally acknowledging their service, but they are more interested these days in making sure Washington does not fail those who served in the most recent wars — Iraq and Afghanistan — by skimping on the funds needed to address their physical and mental health issues. An Army veteran of Vietnam (1969-71), he also served two tours in the Middle East with the Air Force Reserve.

“Don’t do what they did to the Vietnam vets; don’t turn your back on them,” said DelRossi, a retired Stoneham police officer who now lives in Florida. “We can’t forget the veterans, no matter how old or how young they are.”

The idea of Americans finally taking time to honor and remember those who fought in Vietnam pleases Alice DelRossi.

“We need to talk about it,’’ she said, but not by rehashing old arguments about the divisive war. “We need to remind people of the sacrifices that were made, to show we care for everyone who was there, and to help them if they still need help.’’

Linda Morgan Bliss can be reached at lbliss@globe.com.