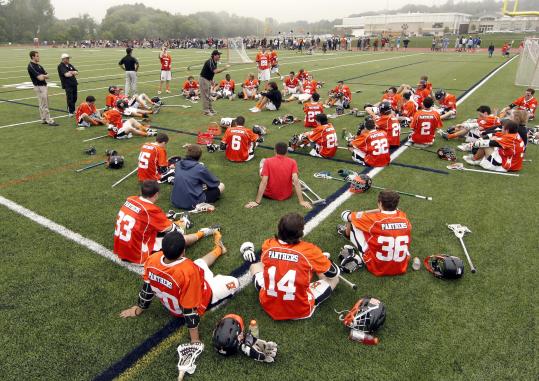 The first artificial playing fields were nearly as hard as cement. AstroTurf was invented in 1965 and first used in the Houston Astrodome in 1966, much to the annoyance of Philadelphia Phillies slugger Dick Allen. “If a cow can’t eat it,’’ he said, “I don’t want to play on it.”

As the playing surfaces have been refined, the number of cities and towns in the region with artificial turf fields on the ground or in the works has grown, even as some communities kick the tires on such projects and find them too rich for their blood.

A survey of the 57 Massachusetts cities and towns in the Globe North area found that 22 already have at least one publicly owned artificial turf playing field. Five other communities are in various stages of building them, often as part of an overall renovation of athletic facilities.

Two other communities — Swampscott and Tewksbury — have rejected plans to install artificial fields, while others are exploring their options.

Most turf fields cost between $750,000 and $1 million, depending on the amount of site preparation required, the type of turf, and extras such as an adjoining tracks or upgraded drainage systems.

Depending on the amount of use, the fields usually last about 10 years. Maintenance costs are low, and the fields can be used almost year-round. High school athletic directors love them because they allow games to be played regardless of the weather conditions.

The Synthetic Turf Council, which represents manufacturers, says that in recent years 75 independent, credible research studies from groups such as the federal Consumer Product Safety Commission and the Environmental Protection Agency have validated the safety of the fields.

When it comes to some sports, teams that play regularly on a home field with artificial turf appear to have a competitive edge.

“I didn’t realize the disadvantage we were at before not having it,” said Jim Coffey, the athletic director at Beverly High, where a new turf field was ready in March, just in time for lacrosse season. The field will be used for several sports, but football will remain on the grass at Hurd Stadium.

Beverly received a $500,000 grant from the state’s Parkland Acquisitions and Renovations for Communities Grant Program toward the $833,000 cost of the turf project. The rest was raised privately.

That’s the route Peabody High would like to go in replacing the natural turf at Coley Lee Field, which turns into a mud bowl after heavy rains. The city has taken some stop-gap measures, but Peabody High AD Phil Sheridan said the high school programs need an artificial turf field.

The city was hoping to land a grant like Beverly, but Sheridan said the lack of an up-to-date open space plan has to be resolved before the state will consider an application.

Communities looking to build artificial turf fields as part of school projects won’t get any help from the Massachusetts School Building Authority, which allocates state aid for renovations and new facilities.

That is not stopping several communities from going forward with new projects.

At Town Meeting on May 14, Wakefield voters overwhelmingly passed a $5 million, 15-year bond funding a project that will provide a new turf field, bleachers with a press box, a concession stand, bathrooms, and team rooms at Landrigan Field, which is used for football and lacrosse. A new turf field, a resurfaced track, and lights also will be added to Beasley Field, which is currently used for lacrosse and track. The project also includes replacing the Wakefield High field house floor and replacing or resurfacing tennis courts in town.

In Newburyport, the city is renovating World War Memorial Stadium — home to several outdoor sports, including football — in stages.

Phase 2 is expected to include an artificial turf field, boosted by a $500,000 donation from the Institution for Savings. City officials hope the field for the stadium, which was built in the 1930s, will be ready for play in 2014.

Wilmington is planning to build an artificial turf field as part of its new $82 million high school, but an appeal by residents who object to this use of wetlands to the state Department of Environmental Protection has delayed the start of construction. The town had hoped the field would be completed in time for this fall’s sports seasons.

Gloucester is raising funds for a proposed $3.5 million renovation of aged Newell Stadium, which would include an artificial turf field among several improvements. The city has committed to issuing a $1.5 million bond, and the private funding is headed by a $500,000 contribution from New Balance for naming rights to the field. The project is expected to be completed in the fall of 2013.

A group called Team Triton is spearheading the effort to raise the $2 million needed for a $2.5 million renovation of the stadium at Triton Regional High in the Byfield section of Newbury, including a new artificial turf field. The Institution for Savings got the ball rolling with a $525,000 donation for the project, which supporters hope to complete by September 2014.

Ground broke in April for renovations to Macdonald Stadium in Malden, a project that will see a new regulation-size track and an artificial turf football field installed. The project, slated to be finished by November, is one of several capital improvements funded by a local meals tax passed last January. Malden already has a turf soccer field at Pine Banks Park.

Still others are in the field of dreams phase. Saugus High AD Mike Nelson said he has had some informal talks with a town official and two informational seminars with an engineering firm.

Danvers High AD John Sullivan said the town hopes to come up with a plan for a field sometime in the next three years.within three years.

Peabody’s Sheridan said the key to his city building its turf field will be getting the first large block of money in place, be in from a state grant, a private donor, or public funds.

That, he believes, will open the door to fund-raising.

“Once people see it’s a real possibility with a finish line, they’re more willing to give,” he said. “The youth sports, the adult soccer leagues, they all start to invest in it.”

Rich Fahey can be reached at fahey.rich2@gmail.com.