Facing the future together 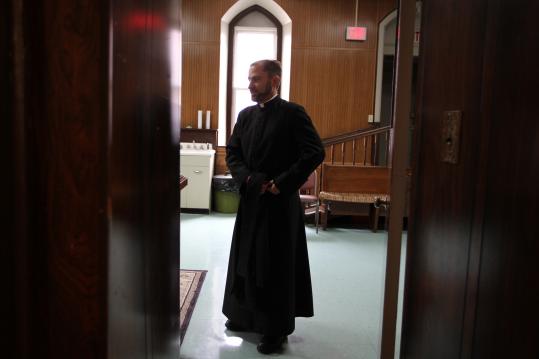 SOMERVILLE — At 33, the Rev. Jason Worthley is one of the youngest priests in the Archdiocese of Boston, ordained eight years ago as part of a group of men he fondly calls “the magnificent seven.”

He’s now one of two priests assigned to three Somerville parishes — St. Catherine of Genoa, St. Ann, and St. Joseph. Worthley and his pastor, the Rev. Brian McHugh, started at St. Joseph last month after the retirement of the Rev. Henry Jennings, 81, a priest at the church for 46 years.

“I’m Father Jason,” he said, introducing himself to about 20 parishioners at the 12:10 p.m. Mass on a Friday. “I’ll be saying Mass here from time to time, as our parishes work together. I hope to come to know you all better, over time.”

The Archdiocese of Boston is preparing for the day when more parishes will share priests, lay staff, buildings, and other resources. A proposal to group several parishes together in a community, or across a town line, has been discussed for the last 10 months. Pastors held meetings this spring to explain the proposal to parishioners. People were asked to take a survey and answer seven “homework” questions to give their opinions.

Cardinal Sean P. O’Malley Thursday will discuss the feedback during a meeting with priests from across the archdiocese. More than 6,000 responses were submitted from the archdiocese’s 288 parishes. A final decision on the groupings isn’t likely until at least the fall, said the Rev. Paul Soper, interim director of the Office of Pastoral Planning for the archdiocese.

“We received a lot of good ideas and suggestions,” said Soper, who also is on the panel that proposed the groupings. “We want to listen to as many people as possible, to try to get this right.”

The archdiocese endured broad criticism and resistance to the closing of 65 parishes in 2004. But the closings did not solve a priest shortage, dwindling Mass attendance, or financial troubles facing 40 percent of parishes today.

“Closing parishes didn’t work,” said Soper, who was the pastor at St. Alphonsus Parish on the Beverly-Danvers line when it closed eight years ago. “When a parish closed, people just went away. The numbers worshipping didn’t improve. We were not better off afterward.”

Under the new proposals, parishes would not close or merge. They would stay independent, in charge of their own assets and finances. But they would be run by a single pastor and a pastoral service team that would include priests, deacons, lay ministers, members of the parish, and finance councils, among others.

“We are trying to get to a place where we change the way our parishes are served,” Soper said. “Parishes are the heart of evangelization. We need to strengthen them.”

Over the next decade, the archdiocese is bracing for a sharp drop in the number of priests.

On June 23, the archdiocese will ordain only six new priests — not enough to fill the void created by retirements.

“We have a major deficit,” Soper said.

Currently, 26 pastors are in charge of two parishes. McHugh is one of four pastors assigned to three parishes.

“I’ve learned to be flexible for the unexpected,” said McHugh, 52, a Lowell native and a priest for 24 years. “It becomes a juggling act to manage more than one parish. . . . It’s a challenge I never dreamed of, but it is the reality we face.”

The proposed grouping for Somerville also includes St. Clement Parish. But the cluster of four parishes hasn’t yet started to map out a future together.

“We haven’t met yet, because the pastoral service teams aren’t final yet,” McHugh said.

The premise behind the parish groupings isn’t entirely new. A decade ago, the archdiocese asked neighboring parishes to work together. Churches in Nahant, Marblehead, and Swampscott started an informal alliance, which some jokingly called The Holy Coast, a nod to the deep, blue sea connecting the three towns. The parishes have held joint liturgies, Bible studies, and parish picnics.

In Salem, four Catholic churches have held community penance services and special liturgies, such as for the 10th anniversary of the Sept. 11 terrorist attacks. This year, parishes held joint retreats for confirmation and First Holy Communion. “We’ve tried to embrace the belief, that while we love our own parishes, we are part of something bigger and more wonderful than ourselves,” said the Rev. John Sheridan, pastor of St. James Parish in Salem.

During advent, the Salem parishes held a tour of one another’s church buildings, which rank among the oldest in the archdiocese. They looked at churches, rectories, parish centers, closed schools, and convents.

“It allowed us to think about what buildings might be useful for what purpose in the future,” Sheridan said. “It was a real eye-opener.”

Pastors and parishioners for a new group proposed for Dracut, Lowell, and Tyngsborough will meet for the first time Friday, said the Rev. Ronald St. Pierre, pastor of St. Mary Magdalene Parish in Tyngsborough.

His parish recently opened a new $1 million church, and a capital campaign is still underway.

“There are some financial aspects at stake here,” St. Pierre said. “People are concerned about what would happen to our new church. We’re sure they wouldn’t close us, having just built a new church, but there is still a matter of paying off the mortgage.”

At St. Joseph in Somerville, some longtime parishioners said they understand why collaboration is needed.

“What else can they do?” asked Barbara Dion, 77. “They don’t have any priests anymore. . . . The young one [Worthley] we had today seems very nice.”

George Alfonso, 91, a daily churchgoer, can rattle off the names of almost every pastor who led St. Joseph. He said he doesn’t mind sharing a pastor and priests with St. Catherine and St. Ann.

“How else is the church going to exist?” he said. “There are no new priests. Masses here used to be loaded with people. Now people don’t go to church anymore.”

Younger priests such as Worthley face a future filled with multiple parishes. And he’s already had some practice ministering to Catholics near and far away.

Before coming to Somerville, Worthley was assigned to parishes in Middleborough and Rochester. It took 20 minutes or so along Interstate 495 to reach each church. In Somerville, he figured it would be easier to get around, since his parishes are just a mile apart.

But on two occasions, he took his time walking to a church for 9 a.m. Mass — only to arrive and realize he went to the wrong church. He didn’t feel quite so “magnificent.”

“I had to turn around and run back to the other one,” Worthley said, grinning. “God’s work is humbling.”