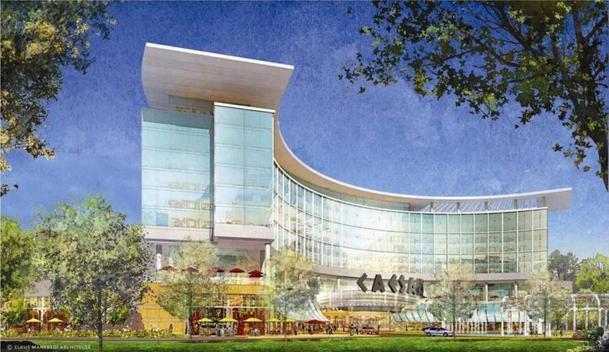 Patricia Payne, a bartender by trade, has it all figured out. As soon as applications are accepted, she is going to apply to mix cocktails at her neighborhood Caesars casino at Suffolk Downs, assuming it is built.

“There’s not too many opportunities here bartending; you have to go into the city, Payne said. “So it would be good money.”

Caesars Entertainment and ­Suffolk Downs unveiled plans Tuesday for a luxury gambling emporium and hotel at the old racetrack, announc­ing their intention to bid for the right to build the sole resort casino in Greater Boston.

On the tired streets near the track in East Boston and Revere, the concept of building a casino was generally embraced, even as some residents worried that gambling might spawn petty crime and alcohol-­related incidents.

“I do like going to casinos myself, but it’s going to be around my neighborhood, so it could affect me somehow in a negative way,” said Andres Cano, 22, a resident of Revere who walked his dog Sasha less than a mile from where the glass-and-steel casino would rise. “I like them, but to be around them? Maybe not so much.”

Wilson Rodas, 39, who lives in Revere, contrasted the neighborhoods closest to Suffolk Downs with those surrounding the Twin River Casino in ­Lincoln, R.I. There’s no contest, he said.

“When I go to Rhode Island, I drive around and see the streets, and houses look better because a lot of people are coming from everywhere, and you have to give a good presentation,” he said.

Maybe, he said, Caesars ­Entertainment’s latest venture will do the same for East Boston and Revere, where he and his wife, Aura Valdez, 47, enjoy walking.

Valdez said the casino would provide an escape from long winter nights stuck at home, giving the retired in the community a chance to enjoy themselves

“People in Massachusetts — it’s very cold here — don’t have too many places to go, especially in the winter, so we need somewhere to go and hang out for a few hours,” she said.

Travel to other Boston neighborhoods, and the prospect of a casino is not always greeted with such a robust embrace.

“Boston is more of a historic city with a focus on academia; we don’t need a casino,” said Kelsey Baker, 22, who lives in Dorchester. “Leave those in Las Vegas.”

Still, Alfred Bellini of Jamaica Plain said the economic boost that developers promise — 2,500 construction jobs and 4,000 permanent jobs — make a casino worth any trouble that might be generated.

“Anywhere there is alcohol and gambling, you’re going to have people trying to drink and start problems, but overall it would be great for the economy and people,” Bellini said. “I would support it 100 percent. It has a lot more pluses than ­minuses.”

Caesars Entertainment chief executive officer, Gary W. ­Loveman, said efforts to ­address community concerns will be amped up now that the formal plan has been made public. Some community groups in East Boston have emerged as strident opponents of building a casino in their neighborhood.

“We’ve had people talking to folks in the community and trying to figure out what their concerns are and how to best address them for some time,” Loveman said. “That process will only accelerate, now that the proposal has been made and there’s something out there for people to look at and ­respond to specifically.”

Executives from Suffolk Downs and Caesars trumpet the promise of bolstered tourism as they try to sell Boston on the ­casino, which must win approval from the state gambling commission and from residents. For one New Hampshire woman, the casino would mean an extra five to eight trips to Boston ­annually.

“If they do build the casino, I will definitely go often,” said Jacqueline Rose of Concord, N.H., while shopping in Dorchester.

The racetrack at Suffolk Downs would be preserved, the grandstands remodeled. And for Tammi Piermarini, 45, a jockey at Suffolk since 1985, that means restoring the Depression-­era track to the glory she remembers from early in her career.

It is, after all, the track where the legendary Seabiscuit once raced. In the 1930s, Seabiscuit won races across the country, regularly drawing crowds in the tens of thousands.

A casino, Piermarini predicted, could energize Suffolk and modern-day East Boston like the legendary race horse did decades ago.

“It’s going to bring everything back to like when Seabiscuit was here,” she said.

Matt Woolbright can be reached at matt.woolbright@globe.com.

The history of Suffolk Downs through pictures