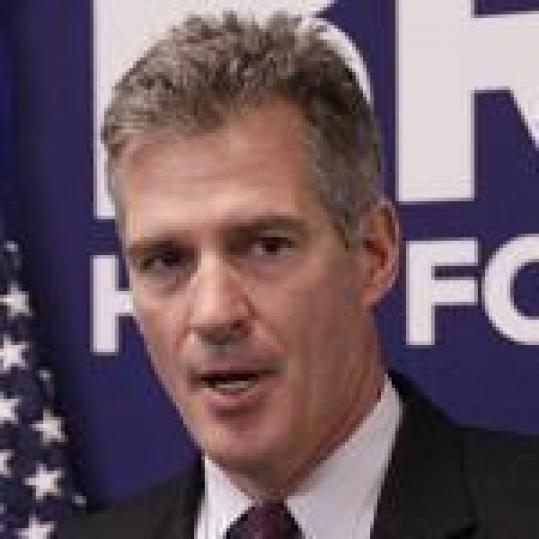 Senator Scott Brown has trumpeted his role in casting the deciding vote in favor of the 2010 Wall Street overhaul, but records show that after he voted for the law, he worked to shield banks and other financial institutions from some of its tough provisions.

E-mails between Brown’s legislative director and US Treasury Department officials show that Brown advocated for a loose interpretation of the law so that banks could more easily engage in high-risk investments.

While the law, known as Dodd-Frank, sets broad parameters for how the financial industry must behave, the interpretation of the law, and the rules that follow, will govern Wall Street’s daily business.

At issue in Brown’s e-mails is the Volcker rule, a particularly contentious provision of Dodd-Frank. The rule, championed by Paul Volcker, a former chairman of the Federal Reserve, prevents commercial banks from speculating heavily in higher risk investments. Banks are federally insured, which means that if they fail, taxpayers must reimburse many depositors.

Brown’s role in helping to loosen the Volcker rule in advance of casting his vote on Dodd-Frank has been well-documented. Notably, he helped create a provision that allows banks to invest up to 3 percent of their money in riskier investments such as hedge funds and private equity funds, and to own up to 3 percent of an individual fund - additions that won him Wall Street support.

But e-mails obtained by the Globe show that Brown’s work on behalf of the financial sector did not stop when the law was passed. In the second stage, as regulators began the less publicly scrutinized task of writing rules amid heavy pressure from the banking sector, Brown urged the regulators to interpret the 3 percent rule broadly and to offer banks some leeway to invest in hedge funds and private equity funds.

Supporters as well as critics of the banking industry agree that Brown’s suggestions would mean looser regulations for banks, though specialists disagree on the extent of the impact.

Kaplan said that he believed banks were depending on Brown, among other lawmakers, to help secure that relief.

“They’re trying to make sure it’s being interpreted in the best light for them, which is appropriate,’’ he said. “They’re not going to say, ‘Please, sir, can I have some more?’ They want to have the best scenario.’’

Simon Johnson, a former chief economist at the International Monetary Fund and now a professor at MIT, said the positions outlined in Brown’s e-mails amount to a “significant loosening of the regulations and absolutely serving the interests of people who do not want to have meaningful reform.’’

“This is a treatise on how to gut the thing,’’ said Johnson, who has praised Brown’s Democratic rival, Elizabeth Warren, on his blog.

Brown’s office declined to make the senator available for an interview. His spokeswoman, Marcie Kinzel, pointed out that Brown’s work on Dodd-Frank was repeatedly praised by Representative Barney Frank, the liberal Newton Democrat who coauthored it. Kinzel said Brown was primarily interested in protecting Massachusetts financial institutions, major movers in the state’s economy.

“Senator Brown advocated for a strong Volcker rule that protected Massachusetts jobs at safe, home-state institutions that had nothing to do with the financial crisis, like MassMutual and State Street, while preventing risky proprietary trading by Wall Street banks,’’ Kinzel said in a statement. “Senator Brown and his staff continued to engage with colleagues on both sides of the aisle to make sure that the work that had been done with Congressman Frank is reflected in the final rule.’’

Brown’s March 2011 memo was written by and e-mailed from Nathaniel Hoopes, his legislative director, who previously worked at the private equity arm of Lehman Brothers, to two Treasury officials - Barrett Hester, who served with Hoopes on the staff of Senator Joseph Lieberman of Connecticut, and Charles Yi. The Treasury Department is coordinating five agencies that are writing the rules, which have yet to be finalized.

Hoopes’s e-mails mix dry policymaking with a lighthearted tone about the laborious process of government rule-writing.

Brown also wrote a shorter, more formal letter to Treasury Secretary Timothy Geithner in June 2011, echoing some of the points made by his staff, with less detail.

Ann Graham, a lawyer formerly with the Federal Deposit Insurance Corp. and an advocate of strict regulation who teaches banking law at Hamline University in Minnesota, said Hoopes’s memo urges regulators to “substantially undercut the Volcker rule’’ in ways that would allow banks to skirt the 3 percent limit on hedge fund ownership and delve into riskier investments.

Hoopes’s memo lays out seven areas of the rule that Brown wishes to shape. Among them:

Three percent rule: The Volcker rule prevents banking entities from owning more than 3 percent of a hedge fund that they sponsor, or “seed,’’ within a year, to limit their exposure in these riskier investments. Brown argues that calculating the 3 percent should be done only once, at the end of the “seeding period,’’ when a fund is attracting initial investors.

Critics say that could allow banks to actually take a greater stake in a hedge fund without running afoul of the rule. Hoopes wrote that the goal was to avoid a “fire sale’’ toward the end of the one-year period that could unsettle the funds.

Broader customer base: The senator also favors allowing banks to bring in more nonbanking customers to invest in hedge funds and private equity funds, rather than restricting those funds to customers who already have deposits in or relationships with the bank.

Hedge fund bailouts: Brown argues for a narrow interpretation of a provision designed to prevent banks from lending money to rescue troubled hedge funds, private equities, and other investments. The senator would keep the prohibition for funds affiliated with banks, but allow banks to bail out nonaffiliated funds with which they have other financial relationships.