THIS STORY HAS BEEN FORMATTED FOR EASY PRINTING
Starts & Stops | Traffic updates online at www.boston.com/starts

Bike-sharing program is on a roll 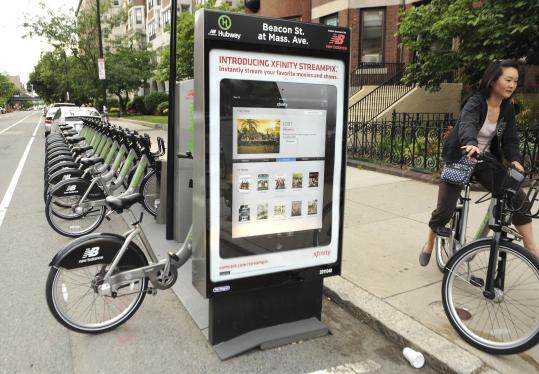 If you’ve been seeing a lot of sturdy silver bikes rolling past lately, you’re not imagining it. The Hubway bicycle-sharing system in Boston had its busiest day yet last Sunday, recording 2,531 station-to-station trips. On Tuesday, it eclipsed the 250,000 mark for total rides.

“It’s absolutely incredible. It’s blown away what we thought projections would be for the system,” said Kris Carter, interim director of Boston Bikes, the city program overseeing Hubway. “To hit that mark this early is really phenomenal compared with [other] bike-share systems across the country.”

That’s a quarter-million trips in six months (and 27 million collective calories burned, according to the Metropolitan Area Planning Council), all without a serious accident. Hubway debuted July 28, came down for the winter after Thanksgiving, and began reappearing in mid-March, though the full complement of 61 stations and 610 bikes was not in place until early April.

For those keeping score, similar systems in Minneapolis (Nice Ride) and Denver (B-cycle) took six months and 7½ months, respectively, even to crack 100,000. Hubway’s on a comparable pace with its closest cousin — DC’s Capital Bikeshare, operated by the same contractor using the same bikes, albeit painted cherry red — though apples to apples comparisons there are harder. Washington’s system, one year older, operates year-round, with a winter dropoff in numbers, but boasts more bikes and stations.

More important to local commuters and recreational riders, Hubway is poised for a significant summer expansion. Roughly around the one-year anniversary, it will expand to nearly 110 stations and more than 1,000 bikes, leaping the Charles River and crossing municipal boundaries with 24 stations in Cambridge, eight in Somerville, four in Brookline, and 11 more in Boston.

The Boston stations will continue to fill in downtown while bringing the system for the first time to Charlestown and Dorchester, with UMass-sponsored stations at the JFK/UMass MBTA stop and again a mile and a half away at the University of Massachusetts Boston campus, providing an attractive alternative to waiting for the school shuttle.

The system’s southwestern border currently reaches to Brigham Circle, Roxbury Crossing, and Dudley Square. Further expansion — particularly to Jamaica Plain, where prospective Hubway riders are clamoring for stations — is planned for “the next iteration of growth,” contingent on funding, he said.

(Carter, by the way, took the helm in April after Olympic cyclist and urban planner Nicole Freedman moved on, following 4½ years as founding director of Boston Bikes, Mayor Thomas M. Menino’s sweeping program to make cycling safer and more popular in the name of public health, the environment, and quality of life. An avid cyclist with a Tufts University planning degree, Carter was previously an adviser in Menino’s office.)

The other communities once hoped to join this spring but needed more time to finish their start-up fund-raising and resolve the legal paperwork to design a system that operates seamlessly for riders, while requiring separate contracts between each city and Hubway’s private operator, Alta Bicycle Share Co., plus a regional agreement.

That wrapped up this spring, with the only hurdle now the manufacture of the actual bikes and stations by Canada’s Public Bike System Co., busy now cranking them out for the 10,000-bike, 600-station system New York City is planning.

The multicity expansion could spur a dramatic increase in ridership, filling in missing circumference routes on the T’s radial inbound-outbound subway map.

Already, Hubway bikes are sometimes seen in Cambridge, though that means riders risk incurring extra fees trying to bring them back to Boston stations.

Designed as an extension of public transit — funded partly by a $3 million Federal Transit Administration grant — Hubway allows unlimited trips at no extra charge for those with annual memberships ($85) or temporary passes ($5 for one day, $12 for three), but extra fees kick in when bikes are not docked again within 30 minutes. (Longer trips can be taken for free as a series of station-to-station hops.)

“It’s going to be more and more useful to people as it provides ways for people to get between the spokes of our transit wheel and go in areas that aren’t well-served by transit now,” said Jessica Robertson, transportation coordinator with the Metropolitan Area Planning Council, the regional organization that helped plan Hubway, paired Boston with Alta, and brought neighboring cities together.

With its cramped streets, famously aggressive drivers, and lack of bike lanes, Boston for years was the scourge of the cycling world, earning repeated mention on Bicycling magazine’s annual list of worst biking cities. But Boston Bikes has vaulted the city into the magazine’s “Best Bike Cities” rankings. After placing 26th last year, Boston pedaled to 16th on the latest list, released in the July issue.

The editors at Bicycling specifically cited Boston’s recent removal of 70 parking spots from one side of Massachusetts Avenue to paint a bike lane, and they gave a shout-out to the nonprofit Boston Cyclists Union for offering free tune-ups at farmers’ markets in city neighborhoods lacking bike shops. The biggest challenge to Boston, according to Bicycling? “Keeping discourse diplomatic” while adding bike infrastructure.

Some motorists have pushed back against the striping of more than 50 miles of on-street bike lanes, the installation of hundreds of new bike racks, the introduction of Hubway, and all the bicycle activity they attract.

Taxpayers pay for the pavement, and all modes of transportation are entitled to share the street. “The car is no longer king,” Menino often says. But those accustomed to decades of motorized dominance sometimes chafe at the idea of ceding asphalt.

“Change is difficult, especially when you’re in a city that’s as old as Boston, and we have constraints in terms of what’s out there,” Carter said. “But whenever we can, we think about how we can make this a better road for bikes and a safer place for pedestrians — and how can we still move traffic as best we can.”

If you think 16th for Boston is good, check out the latest state rankings released two weeks ago by the League of American Bicyclists, which placed Massachusetts third — up from ninth last year and 19th in 2010.

That ranking scored states on 56 questions in five categories: legislation and enforcement, policies and programs, infrastructure and funding (the Bay State’s weakest category), education and encouragement, and evaluation and planning. Massachusetts paced the Northeast, trailing only Washington and Minnesota.

David Watson, executive director of the statewide education and advocacy group Bike, said the rankings show the work that the state Department of Transportation and cities and towns are doing to encourage cycling, as well as the work of advocates.

The league also ranked bicycle-friendly businesses and employers — DOT was a rare government agency on the list — as well as individual communities. Though no Massachusetts municipality placed among the 19 (of all sizes) earning platinum or gold status, Boston earned silver, and Arlington, Northampton, and Somerville earned bronze.

“This is a recognition that we’ve put a lot of good things in motion, but we have to continue to carry through,” said Watson, who has advocated, among other things, for the adoption of a vulnerable road users bill that would raise fines and require more education and community service for drivers who hit bicyclists and pedestrians — a bill referred for study by the Legislature’s Joint Transportation Committee last week, a gentle way of killing it for the year.

Speaking of motorists who lose their cool over bikes . . . Watson was on his way to work last September, going uphill on Boston’s Cambridge Street, waiting at a light, when he felt a bump from the car behind him. Jostled, he turned and saw two men laughing in the front seats. Then the car rolled forward, slowly but surely pushing him into the intersection.

Watson, in disbelief, rolled out of the way and fumbled for his phone, trying unsuccessfully to take a clear picture as the car accelerated through the intersection toward Government Center. Then he did what he does best — bike — and caught up with them at another red light, despite the substantial dent in his rear wheel. He got a clean shot of the license plate and was trying to photograph the men when one got out and began yelling and threatening Watson to give him the phone — until onlookers called for the man to leave Watson alone, at which point the car took off.

Boston Police responded and recorded a complaint, but because Watson was unhurt and the witnesses who came to his aid had not seen the initial collision, the case wound up in mediation instead of prosecution at Boston Municipal Court. A few weeks ago, Watson and his alleged assailant reached an unusual agreement: The motorist, a Roslindale resident, agreed to pay for a new bike and to record a statement for the record.

“I extend my sincere apology to Mr. Watson. This incident has served as a real wake-up call for me to be a more responsible, law-abiding, vigilant, and aware driver,” the man said. “This is especially necessary in Boston, where motorists like me must learn to share the roadways with a growing number of bicyclists.”

Watson, initially disappointed by the lack of prosecution, came to see mediation as a victory, especially compared with the lack of traction he might have gotten even a few years ago. He was also given permission to publish the man’s name and statement in Bike materials.

“He didn’t get off scot-free,” Watson said. “I would consider it a victory for bicyclists, and if more motorists hear about this — I’m sure you’ll get the lunatics who will comment ‘too bad he didn’t kill me’ — I think it will cause motorists to think about it.”