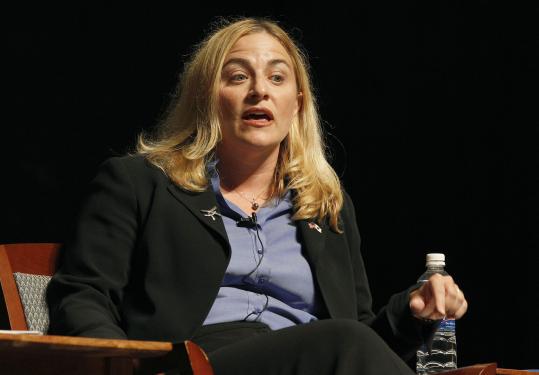 If North Shore lawyer Marisa DeFranco can woo enough delegates, she has a chance to win a spot on the ballot.
By Frank Phillips Globe Staff / June 2, 2012
Text size – +

Massachusetts Democrats will gather in Springfield at a state party convention Saturday, with US Senate candidate Elizabeth Warren seeking to recapture the fervent enthusiasm that marked the early days of her campaign, and lock up the endorsement that would free her of a party primary.

With much at stake in a race that could be critical to control of the US Senate , a solid majority of the more than 3,000 delegates are expected to give Warren the party’s official backing in her bid to unseat Republican incumbent Scott Brown.

But the convention will also test whether she can marshal a super-majority that would clear the Democratic primary field of her only opponent, a little-known North Shore immigration lawyer, Marisa DeFranco. A candidate needs 15 percent of the delegates to qualify for the party’s Sept.6 ballot.

Warren also hopes to use the celebratory atmosphere of Saturday’s event, and her much-anticipated speech to the delegates, to reinvigorate a campaign that has been drained of its energy lately, dogged by the heated controversy over her assertions of Native American heritage. Her aides say her speech will be a direct assault on Brown’s record on issues such as student loans, jobs creation legislation, his ties to Wall Street, and his votes on environmental issues.

“The convention is a natural opportunity to move into the next phase of the campaign, which is to focus on the issues that people of Massachusetts have told Elizabeth are important and over which she and Brown differ,’’ said Doug Rubin, Warren’s senior campaign consultant.

As of Friday night, it was not clear whether Warren’s vote tally would be enough to avoid what some party leaders say would be a major political setback in a race that is such a high priority for national Democrats, namely a primary battle that would divert resources and attention away from defeating Brown.

Much will depend on the often chaotic dynamics of the convention floor, including heavy-handed politicking and unpredictable behavior by some delegates.The key will be the 300 or more delegates who are coming to the convention hall with no clear commitments. If DeFranco can woo enough of them, she has a chance to win a spot on the ballot.

“If [DeFranco] were to give a fiery, passionate speech, that can move some delegates who believe in giving ballot access even if the candidate has no chance of wining,’’ said Paul Pezzella, a long-time Democratic political organizer and member of the party’s state committee who is backing Warren. “There is a certain charm in the purity of irrelevance, and there is always a bloc of those sort of delegates. They lead with their hearts, not with their heads.’’

DeFranco will be up against some formidable figures in the state party, including Michael S. Dukakis, former governor, who rarely gets involved in intraparty politics but said he will be working the floor trying to persuade delegates that they need to rally behind Warren. Dukakis also headlined a send-off rally for Warren as she left South Station in Boston bound for Springfield by train Friday afternoon.

“The speeches may well have some effect, but I think a strong face-to-face presence on the floor talking to the folks who are not committed will also make a difference,’’ said Dukakis.

Joseph Ricca, who has run numerous convention floor operations, said DeFranco’s best hope lies in the unpredictability of delegates, or what he calls “spontaneous combustion’’ that can happen when delegates hear a speech or are drawn by face-to-face meetings with a candidate and suddenly change their minds. Not even the best political organizations can prepare for that.

One of those delegates, Jean Palmer, a librarian from Lincoln, disputes the notion DeFranco can’t win the primary or the general election, despite the fact she has a vastly underfunded campaign and has made little headway in gaining voter visibility over the last several months.

Janet Beyer, a Concord delegate, said she is going to the convention undecided, but is drawn to the argument that the party should avoid a primary fight.

“I am going to decide on the floor,’’ she said. But she also expressed concern that the Native American heritage controversy demonstrates that Warren could use some political seasoning.

A primary, Beyer said, would make Warren “better able to cope with hostile questions before she is thrown to the wolves,’’ Beyer said.

The convention comes as Warren struggles to quell the political and media uproar over her assertions of Native American heritage in a legal directory and during her tenure as a law professor at the University of Pennsylvania and Harvard Law School. After weeks of muddled statements and apparent contradictions, Warren said Wednesday night that she had personally reported herself as a Native American to the schools.

A new Boston Globe poll shows that a large majority of voters said the issue would have no impact on their decision about which candidate to support. Still, Brown and the Republicans have shown no signs of letting up.

On Friday, the state GOP released a new video, dubbed “Deceitful,’’ that reviews the Native American controversy and asks delegates, “Is this really who you want representing you?’’

A day ahead of the convention, Warren fought to redirect the conversation.

The whistle-stop tour from Boston to Springfield, and the upbeat visuals that accompanied it - Warren in red, smiling with her supporters, banners waving - was designed to shift the focus from the drumbeat of controversy, toward the soaring rhetoric that helped propel her into the national spotlight when she launched her Senate bid last fall.

But as Warren stepped off the train in Springfield, it was clear the Native American issue has not been put to rest.

Reporters bombarded her with the latest round of questions about why she has failed to give consistent answers and whether she would address the topic on Saturday.

Once again, Warren was on the defense.

“I have made clear where I stand,’’ she said. “I am very proud of my family. I didn’t receive any benefits, and what I am going to talk about tomorrow is how it is we are going to win this race because that’s what really matters.’’

Globe correspondent Alejandra Matos contributed to this report. Frank Phillips can be reached at phillips@globe.com.