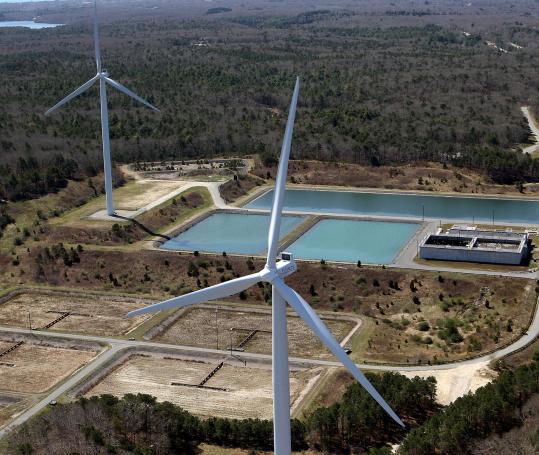 In Falmouth, a wind turbine had been ordered shut down by the state because tests showed it exceeded noise standards. (David L. Ryan/Globe Staff)
By Robert Knox Globe Correspondent / May 31, 2012
Text size – +

Both critics and backers of local wind power projects praise the state’s recent decision to shut down a noisy wind turbine in Falmouth, but their reasons are different.

Critics say the decision lends credence to their complaints about the effects of sound from turbines. Wind-energy backers, meanwhile, contend that their turbines are different from the atypically noisy Falmouth one.

“We’re actually glad the state is doing something about that one machine,” said Brian Kuhn of Associated Wind Developers of Plymouth. “It’s almost a case of one bad apple spoiling the whole bushel.”

State officials shut down the wind turbine in Falmouth after measurements showed the machine generating more than 10 decibels above ordinary background noise, the state standard, and ordered a second turbine to stop working at night while an investigation continues. Officials say they’re also considering new rules to limit noise.

The decision cheered neighbors opposing plans such as Kuhn’s proposal to build a 300-foot wind turbine in South Plymouth, itself a step back from a previous developer’s proposal of two 400-foot turbines.

“It’s wonderful that the state’s looking into it and doing the research before we dive into this and make things happen,” said Cheryl Newall of Dyer Pass in Plymouth. Newall said she worries low-frequency sound waves may affect her baby.

Kuhn cheered, too. He said the Falmouth turbines are contributing to a growing anti-wind climate as opponents use neighbors’ complaints there to beat down proposals elsewhere.

When residents last year protested studies for a wind turbine in Duxbury, town officials quickly scrapped it. When Quincy residents lobbied this spring against a turbine, even though the nearest household would be a mile away, the mayor pulled the plug, saying residents were “uncomfortable” with the plan.

But officials in communities where the blades are already spinning say the Falmouth case has no impact on them.

“It has nothing to do with us,” said Scituate public works director Albert Bangert. Scituate’s turbine, which started up in April, has received nearly unanimous support, Bangert said.

The Falmouth turbines are an older generation, said Mark Beaton, chairman of Kingston’s Green Energy Committee, which oversaw the completion of a large turbine on town land and backed three privately located turbines.

“We have what is now state of the art,” Beaton said of the 400-foot, 2-megawatt turbine located on the town’s capped landfill.

Under perfect noise-travel conditions, sound from the turbine adds approximately 3 decibels, far below the state standard. “That’s equivalent,” Beaton said, “to the rustle of the leaves.”

Tom Bott, Kingston’s town planner, held his telephone up in the air from the base of the turbine on a recent afternoon. “Hear that?” he asked.

Only silence came across the wires. “That’s what I’m hearing,” Bott said.

Not only are the Falmouth turbines an earlier version of the technology, there is reason to suspect they developed problems from lying in storage for two years — not a good thing for a high-precision machine, Beaton said.

“The nearest neighbor [in Falmouth] was 1,500 feet away. There’s a problem there,” agreed Larry Chretien, executive director of Energy Consumers Alliance of New England, which purchases wind energy. “You don’t hear other machines at that distance.”

But wind power critics say the state’s decision validates concerns they’ve been expressing for years — that sound generated by turbines, both audible and sub-audible, can cause problems such as sleeplessness.

Those issues resonate with Newall, who says sleep is hard enough to find for parents with a baby. “He takes my sleep,” she said of her young son. “I give it to him. But I don’t give it to turbines.”

Attorney Christopher Senie, who is representing a dozen Kingston families challenging that town’s decision to build its turbine near their neighborhood, said the Falmouth case shows that turbines in use or proposed for communities such as Hull, Kingston, Scituate, and Plymouth “are too big to be as close to residents as they are.”

What Senie terms large-blade designs “generate a stubborn low-frequency set of sound pressure changes that people are affected by,” he said. The heavy blades move more slowly and make “the whump-thump” that carries to people as “sub-audible sounds.”

While Senie praised the state’s decision on the Falmouth turbines, he said current sound standards are not complete. The “distressing sound pressures” in the sub-audible range that affect neighbors should also be studied.

But wind power backers say they have been studied. Chretien points to a recent health study commissioned by the state that gave wind turbines a clean bill of health.

Released earlier this year, the “Wind Turbine Health Impact Study: Report of the Independent Expert Panel” concluded that from a distance of 1,200 feet, sound pressure levels generated by turbines are below the “annoyance” level. It also concluded that “infrasound [sub-audible] vibrations” from wind turbines are not felt by people and there is no evidence to connect turbine noise to a range of complaints including pain, high blood pressure, hearing impairment, and headaches.

The state’s report as well as studies offered by opponents are likely to be picked over by those arguing how close you can live to a wind turbine.

But in Scituate, where the new turbine is a source of community pride, people aren’t worried about getting too close. “It’s located in a public place,” Bangert said, “and people come to visit it daily.”