PBS stops by for a makeover 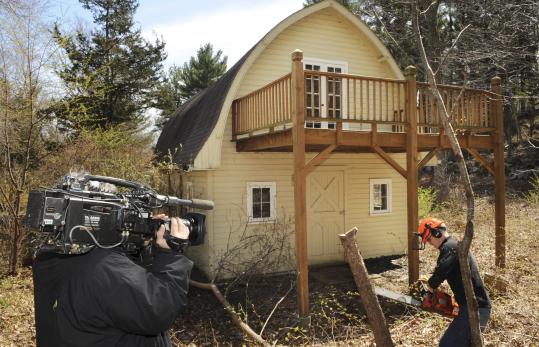 Steve D’Onofrio (left) of “This Old House” films John Corcoran working with a chain saw near a barn adjacent to his Essex cottage. Tom Silva, general contractor for “This Old House,” goes over plans for the Essex project. (Photos by Lisa Poole for The Boston Globe)
By Joel Brown Globe Correspondent / May 24, 2012
Text size – +

ESSEX — When crew members from the venerable PBS series “This Old House” began clearing brush around their next project house a few weeks ago, homeowner John Corcoran put on a hard hat, picked up a chain saw, and worked alongside them.

“Part of the reason we moved to Essex was it’s a small town, rural, with lots of trees,” Corcoran said. “Chain saw therapy, I call it.”

The hillside cottage isn’t his residence, however. Corcoran and his wife, Julie, have lived in another house close by for nearly a decade, raising four daughters there. They bought the cottage a few months ago as a place for Julie’s parents to stay when they come to visit, expecting they will eventually move into it for good.

There’s lots of work to do first, though, and the “This Old House” team will completely renovate the cottage as part of the show’s 33d national season.

Corcoran is the founder and president of Waltham-based Trinity Partners LLC, a holding company. He is well-versed in “This Old House,” which began as a local show on WGBH in Boston back in 1979 and went national a year later.

“I’ve been a fan of the show forever,” Corcoran said later. “But I never thought in a million years that I’d end up on it.”

The 1,300-square-foot cottage sits on a wooded hillside above Apple Street, with views through the trees out to Castle Hill in Ipswich and beyond. The property has a tranquil, remote feel, even though it’s only a couple of minutes’ drive from the bustle of Route 133.

The house also has a fascinating pedigree: It was built circa 1935 for Irene Hammond, wife of prolific inventor John Hammond. They lived in the famous Hammond Castle on the shore in the Magnolia section of West Gloucester, where John Hammond kept a lab for his work.

“I was told he’d be at a dinner party or something and he’d have an idea and start writing on a napkin, and then he’d get up and nobody would see him for four days,” Corcoran said.

Irene Hammond used the cottage as a place to paint and relax away from the castle, said Corcoran, who has been researching the property. When she died, he said, it passed to her nephew, who raised four children there. Corcoran has been in touch with the children.

A third owner took over in the 1990s and in recent years had rented out the property. By the time Corcoran took possession, it needed work inside and out, and the woods and gardens around it were overgrown.

He was already in contact with Silva, who was renovating the kitchen in his own home.

“I asked Tom to take a look [at the cottage] when we were thinking of buying it,” Corcoran said, and then the idea of submitting it to the show came up. “You blink for a second, and then you say, ‘Sure, why not?’ ”

After the usual vetting process, the project was chosen along with one in Cambridge for a city mouse/country mouse season.

The Essex project will encompass 11 episodes, airing on PBS beginning in January, including on WGBH. Corcoran still pays for the renovation, but some materials come as donations from manufacturers looking for exposure.

He said he was glad the show will spotlight Essex; “This Old House” hasn’t been to the North Shore since a Manchester-by-the-Sea project in 2001.

“The only challenges have been working on a fast schedule and being sensitive to the character of the house,” Corcoran said. “It would be easy to just nuke it and start over, but we’re not doing that.”

“A lot of homeowners would,” said senior series producer Deborah Hood. “What’s great about these homeowners is that they just really respect the history of the house and are trying to actually undo some of the things that were done.”

The biggest target was an ungainly second-floor addition.

“The dormer was aesthetically jarring,” Corcoran said. “While it didn’t appear to be sagging or anything, it was also a mystery as to what was holding it up.”

When you add in the little barn where Mrs. Hammond painted, exterior landscaping, and energy efficiency issues, there’s a lot to do.

“The ability to have single-floor living in the fullest sense of the words was really important to us,” Corcoran said.

That means relocating the kitchen to create a ground-floor master suite, making the entrance universally accessible, and details like removing door jambs.

Corcoran cannot be there in his hard hat every day; far from it. That is where the webcams on www.thisoldhouse.com come in handy.

“I can sit here in my office here in Waltham and can pull it up occasionally and take a look. It gets quite compelling when you start these things and you’re dying to see what went on that day,” he said. “There is a certain novelty to it to be sure, but joining the ranks of all the great shows they’re done in the past is kind of exciting. You know when it’s going to emerge it will be beautiful.”

Changes “This Old House” will make to the Essex cottage: