AT&T, T-Mobile have signed on 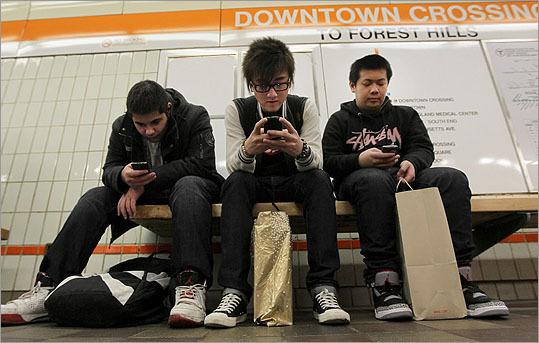 (Bill Greene/Globe Staff) MBTA riders used their cellphones at the Downtown Crossing Orange line platform. Officials predict complete cellular service for all underground portions of the subway will be fully wired by the end of the year.
By Matt Rocheleau Globe Correspondent / May 21, 2012
Text size – +

All underground portions of the MBTA subway system should be fully wired for cellphone reception by the end of the year, the company designing and installing the network predicted.

But many T riders may have to wait longer before they can talk, text, and check e-mail throughout the system’s 19 miles of tunnels: Only two major mobile carriers, AT&T and T-Mobile, have immediate plans to introduce or expand their subterranean coverage.

Verizon offers service at four downtown stations and the tunnels between them but has not announced plans to expand its coverage. Other carriers have not worked out agreements with InSite Wireless, which signed a contract with the T in 2005 to oversee the project. The company charges carriers to connect to the underground network and gives a percentage of the revenue to the Massachusetts Bay Transportation Authority.

The T expects the deal will net the agency about $5.3 million over the course of its 15-year contract with InSite Wireless. That figure should rise as the areas where cell service is offered expand and as more carriers sign on, said MBTA spokesman Joe Pesaturo.

The announcement by InSite Wireless signals a big step toward the goal of end-to-end mobile coverage.

In March, T-Mobile added service along the entire Blue Line and on the Green Line, except at Prudential and Symphony stations, according to T-Mobile spokeswoman Patty Raz.

AT&T expects to add service to the Blue Line and that same portion of the Green Line later this summer, spokeswoman Kate MacKinnon said.

Both companies have offered service on the entire Orange Line and some of the Red Line since 2010.

Subway cell reception launched in 2007 at four downtown stations - Government Center, Park Street, Downtown Crossing, and State Street - and the connecting tunnels between them. Verizon offers service there. It is the only below-ground section where a carrier other than AT&T and T-Mobile offers service.

For some riders, the expanded service cannot come soon enough. Others say that it comes with added nuisance.

Rob Quinn, 27, of Brighton, rode on an inbound train on the T’s Green Line on Sunday afternoon. He, along with more than a dozen passengers, had no choice but to listen to a woman yell incessantly on her cellphone for eight stops, all of which were on the above-ground trolley section of the line’s B branch, where cellphone reception is available at full strength for most users.

“That was annoying,’’ he said, moments after the woman stepped off the train at Blandford Street, one stop before the train descends below ground. “Though, it’s not the fault of the cellphone or their carriers. It’s the user. There will always be rude people.’’

At the same time, he acknowledged the convenience cellphone reception offered.

It “will be helpful, if you need to look up directions, text someone, or look something up,’’ he said.

Michael Murphy, a Verizon spokesman, said the company is in discussions about expanding service within the T.

By the end of the year, carriers will be able to broadcast their service from untapped areas of the Red Line - between Kendall and Alewife stations and between Shawmut and Ashmont stations, as well as inside Prudential and Symphony stations on the Green Line’s E branch, according to Joe Mullin, InSite Wireless’s vice president of engineering and operations.

Those projects are the last of InSite Wireless’ plans to provide cell carriers the chance to offer continuous mobile reception through all of the MBTA’s 35 underground stations, Mullin said. He declined to disclose the cost.

In all, Mullin said 98 remote amplifiers, 422 antennas, and 71,455 feet of radiating cable will be burrowed within the T’s tunnels to complete the distributed antenna system.

Matt Rocheleau can be reached at mjrochele@gmail.com.