Kids are toning up, tuning in 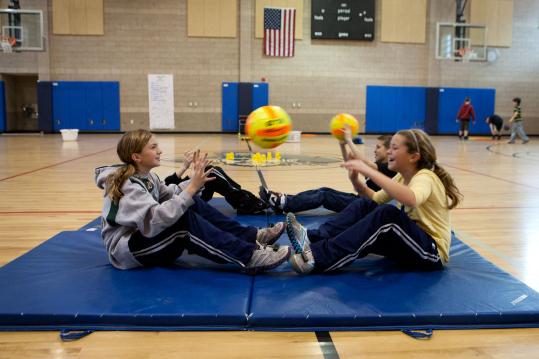 Lauren Anastos (left) and Jaclyn Diemer, both 11, throw a ball in a sit-up position during the morning gym class at Lillian M. Jacobs Elementary School in Hull. (photos by Kayana Szymczak for the Boston Globe ))
By Johanna Seltz Globe Correspondent / May 20, 2012
Text size – +

HULL — Teachers at Jacobs Elementary School don’t mind when their students get to class a little sweaty and out of breath. That’s because the youngsters coming from the school’s early-morning exercise class seem better able to stay in their seats for the rest of the day.

“We only have anecdotal evidence, but it does seem like students who participate are more focused for school,” said school principal Jean Penta. “Teachers have noticed [the students have] a better ability to attend at the beginning of the day.

“It’s a really good way to get [youngsters] started in the morning. It’s much better than sitting in front of the TV waiting for the bus,” she said.

Inspired by research like that of Harvard Medical School psychiatrist Dr. John Ratey, who describes exercise as “Miracle-Gro for the brain,” the early-morning exercise movement is gaining traction in education circles.

Locally, in addition to Hull, schools in Avon, Dedham, Hingham, Middleborough, Norwood, Westwood, and Boston have jumped on the trend. Officials hope getting kids moving early and often will not only improve their physical fitness, and strike a blow against childhood obesity, but also improve their academic prowess.

Hingham’s Foster Elementary School started a before-school exercise class in March. More than 100 students signed up, and the school had to hold a lottery to fill the 40 available spaces, according to principal Debbie Stellar. She said she hopes to expand the twice-a-week program next year.

The Hingham volunteers who run the classes were trained by BOKS, an acronym for Build Our Kids’ Success. The program started in one Natick elementary school in 2009, and since becoming affiliated with Reebok in Canton has expanded to 84 schools around the country, according to founder and executive director Kathleen Tullie.

The schools use 45-minute sessions to focus on specific physical skills, incorporating them in games, obstacle courses, races, and exercises. Each session ends with a brief talk about good nutrition.

Evelyn Julian learned about the BOKS program through her job at Reebok and introduced it to her sons’ school in Hingham. She was concerned that students had gym only once every six days and weren’t getting enough physical activity. And she wanted to share the program her company was championing.

“The feedback I have received from some of the parents has been extremely positive,” she said. “My son tells me [that] after BOKS he feels like his brain is ready to learn in class. What more could I ask for?”

In Middleborough, School Committee member Sara Cederholm learned about the BOKS program at a conference and, using a $12,500 grant from Ocean Spray to cover expenses, started local classes in two elementary schools in the fall of 2011. She said 160 children participate and that “the kids absolutely love it.”

Feedback from teachers and parents also has been positive, she said. Teachers tell her that students with attention deficit problems are particularly helped by the early-morning exercise, she said.

Lori Tobin started the Hull morning classes, which are not affiliated with BOKS, in the fall of 2010. She wanted to help youngsters get in shape for sports but also to give them a chance to get ready for school.

“I’m a runner and I understand that running in the morning really sets my day up,” she said. “I know it helps me, and I know it would have the same effect on children.”

In fact, Tobin said, her son’s teacher wanted to make sure he participated in the morning exercise class before he took his MCAS test, because it would help him focus better.

Ratey, whose 2008 book “Spark: The Revolutionary New Science of Exercise and the Brain’’ is considered the bible of the children’s exercise movement, said new research results are “pretty compelling” in showing a positive effect of exercise on children’s learning and behavior.

“There are pretty hard-edged confirmatory studies coming in from around the country” and the world, he said, and studies indicate a particularly marked impact on children with attention deficit disorder, he added.

Results aren’t in yet from a study that Ratey and the National Institute on Out-of-School Time at Wellesley College are conducting in Natick on the impact of the BOKS morning exercise program. The study covers 540 children in kindergarten through second grade — including a control group that is not taking the classes — and will look at such things as academic achievement and cognitive, social, and executive functioning.

Ratey said “subjective reports” from Natick teachers, parents, and students indicate that the youngsters “are much better able to pay attention in school and be less fidgety and more awake.”

Another report, from a BOKS program in Washington, D.C., contained some eye-opening news, Ratey said: 96 percent of the second- through fourth-graders who participated said they wanted to do it again.

“These are kids who got up an hour early three times a week!” he said. “They loved it.”