The Sox’ early swoon has made prime seats unthinkably easy to buy, and harder to sell 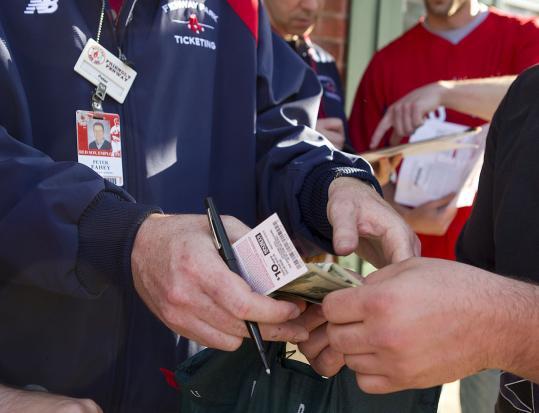 Fans can get a bargain at Fenway’s no-scalp zone for same-day sales, where ticket holders try to unload seats. (Jay Connor for The Boston Globe)
By Beth Teitell Globe Staff / May 19, 2012
Text size – +

It was a beautiful evening at Fenway Park, but Jim Walker didn’t come just to see the game. Desperation also drew the season ticket holder to the park, for one final attempt to unload a dozen tickets, even if it meant parting with a $125 seat for $35.

“People used to call all the time,’’ said Walker, president of Walker Motor Sales in Woodsville, N.H., and a longtime season ticket holder. Now, he’s the one dialing. “They’ll take my calls, but they’re not interested,’’ he said.

He was one of about 10 slightly miserable season ticket holders hoping to recoup at least some of their expenses at the Sox’ official “scalp-free zone’’ for same-day sales before last Saturday’s game. “I spend more time with Peter than with my wife,’’ Walker added, gesturing to one of two Sox employees trying to match sellers and buyers outside Gate C.

Their seats are often selling for less than face value, if at all. Clients and pals don’t even want them as gifts. And with ample tickets for sale - at or near face value except for especially coveted games - on sites like Ace Ticket, friends and associates no longer feel the need to snap up season ticket holders’ offerings weeks or even months in advance.

“You feel like you’re making sales calls when you’re trying to give them away,’’ said Jeff Ciffolillo, president of the New England Realty Group in Canton. With a one-fifth share in two $175 State Street Pavilion seats and another pair of $47 seats in right field, he’s become fatigued by rejection. “It’s a painful process, going through your Rolodex. You get tired of people saying no.’’

Season ticket packages don’t come cheap. One seat in the Dugout club (directly behind home plate) can cost as much as $48,000 per season. The average price for a midrange season ticket (in the infield grandstands) for weekend-only games is $50, or $5,600 for four seats for the season.

But a good number of season ticket holders justify spending so much because they know - or thought they knew - they can recover a portion of their outlay.

With buyers scarce, flinty feelings among some season ticket holders are growing - directed at the Sox, of course, but also toward friends, colleagues, and loved ones who aren’t holding up their end of the unspoken deal.

“There are a lot of excuses,’’ Richard Tourangeau, a season ticket holder from Mission Hill, said as he waited for buyers in the no-scalping zone last Saturday. “You put out the word to everyone, and everyone’s busy or it’s too cold or the team’s not playing well.’’

In early May, the thought of his seats remaining empty yet again was so distasteful that Tourangeau went to two games alone, sitting in his usual perch along the third base line with three empty seats next to him. “It was cold and raw,’’ he said, figuring that at $500 per game, he’s lost $3,000 so far in unsold tickets. “It’s simple math,’’ he said grimly.

Some season ticket holders who are running the numbers say they’re thinking they won’t renew. “I’m done,’’ said Drew Forte, an insurance salesman who has had five seats about 20 rows behind the Sox dugout for about 15 years.

He was also at Gate C last Saturday, and as game time neared, he feared he wouldn’t get anywhere close to the $99 face value.

“The other night I sold them for $50 apiece,’’ he said, noting that he had driven in from Mansfield, a 45-minute trip each way. “It’s a lousy investment.’’

Fred Posternak of Newton, another no-scalp zone visitor, said his wife is getting worried about his $130 seats.

“She’s on my neck for spending all the money on tickets,’’ he said. He, on the other hand, isn’t too concerned. “When June, July, and August come there will be greater demand. They can’t play any worse than they are now.’’

Sox officials have a considerable financial stake in season ticket holders’ investment - and their contentment. Sitting in a conference room with a gorgeous view of Fenway Park, Sam Kennedy, the team’s chief operating officer, gushed about the team’s crucial constituents, the loyalists who hold more than 22,000 of the park’s 37,000-plus seats.

“Our goal and mission,’’ he said, “is to make sure that our most important customers, our season ticket holders, have the best experience possible at Fenway, and get value for the major investment that they make.’’

Here’s how much the Sox care: Even with a waiting list of 8,500, an all-time high, Ron Bumgarner, senior vice president of ticketing, calls season ticket holders who plan to drop their packages and invites them in to feel the magic behind the scenes at Fenway(his wooing average is about .500).

But despite the robust waiting list, and a slightly elevated paid attendance rate, tickets for future games are selling a little slower than they did last year. The no-show rate is typically between about 5 and 10 percent, and this year it’s hovered on the high end, Kennedy said.

In the wake of the team’s self-destruction last fall, when it lost 18 of its final 24 games and didn’t make the playoffs, the season ticket renewal rate for 2012 dropped to 96 percent, compared with a 98 percent rate for the 2011 and 2010 seasons. After the Sox won the World Series in 2004, 99.6 percent of season ticket holders renewed.

The diminished interest is also visible at Ace Ticket, where average prices are down 10 percent from 2011, and another 10 percent from 2010, said chief executive Jim Holzman. “You can get games for face value going into June, which is unusual.’’

The turn of events has made one group happy: people who want tickets to a single game. For the first time in recent memory, they feel they can see baseball at Fenway without hitting up a season ticket holder or paying exorbitant prices to a scalper or online reseller.

As the team tries to fight its way of out last place, Stuart Rothman, president of First Cambridge Realty Corporation and a part owner of two $175 State Street Pavilion seats, reflected on happier days.

“There was a time when you’d look at those tickets and think these are going to be a treat for people,’’ he said. “But now they are more of a burden. I have difficulty giving them away, never mind selling them for a fraction of their face value. The cachet is gone.’’