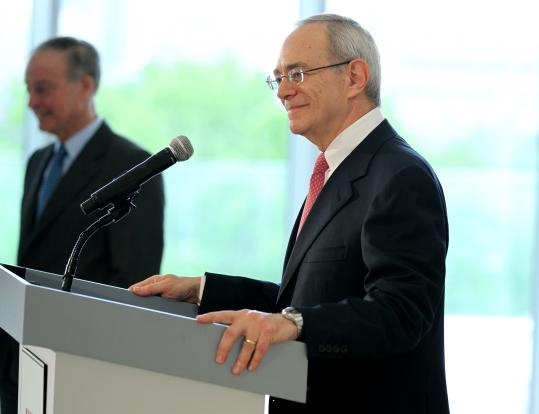 Rafael Reif says he is committed to meritocracy.
By Mary Carmichael Globe Staff / May 17, 2012
Text size – +

CAMBRIDGE - Rafael Reif, named the 17th president of the Massachusetts Institute of Technology Wednesday after 32 years at the school, almost did not come to MIT at all.

Courted as a postdoctoral scholar in 1979, he was so put off by the university’s image as “this cold place where nobody talks to each other’’ that he repeatedly refused a job interview. To be polite, he told a persistent recruiter there was only a 5 percent chance he might like the school.

But when the recruiter pointed out that “five is not zero,’’ Reif gave MIT a skeptical shot - and never left.

“I interviewed with all these big names,’’ he said. “They were down to earth, the nicest people that give you their time and are clearly interested in you. . . . When I saw that, I said, ‘This is it.’ ’’

Reif, currently MIT’s provost, will become president July 2, replacing Susan Hockfield, who announced in February her intention to step down after more than seven years in the post.

A pioneer of semiconductor research and an early advocate of nanotechnology, Reif has 15 patents and five books to his credit. He previously chaired MIT’s department of electrical engineering and computer science.

In recent months he has promoted online education. He was a driving force behind MITx, the university’s plan to offer free, high-quality college courses on the Web.

As provost, he has also dealt with practical matters such as the school’s budget. He said in an interview Wednesday that an upcoming fund-raising campaign would be a high and immediate priority.

The search for Hockfield’s replacement lasted less than 10 weeks. By comparison, the committee that named Hockfield president in 2004 took seven months.

Reif, 61, was a strong contender in a search focused all along on internal candidates with deep knowledge of MIT, as well as executive experience and research credentials. Yet in a press conference at the MIT Media Lab Wednesday, he professed humility.

“I cannot tell you that this is a dream come true,’’ he said, “because it’s a dream I never dared to imagine.’’

Hockfield appointed Reif (pronounced “rife’’) provost in 2005. In that position he has overseen the university’s academics and its budget, trimming a $50 million deficit and putting the school on solid footing during the global economic downturn.

His financial prowess should be an asset to the fund-raising campaign. Though he does not yet have a timetable or dollar goal, he does know what he wants to spend much of the money on: new buildings and renovations for projects that have outgrown their facilities, especially those that involve nanotechnology.

Gesturing toward his surroundings in the Media Lab - a 2009 building that is the architectural equivalent of an Apple product - he said during an interview, “Wouldn’t it be great if every single MIT building looked like this?’’

The son of an Eastern European émigré who escaped the Holocaust, he grew up poor in Venezuela, the youngest of four boys. He watched his two oldest brothers go to work after finishing elementary school “to help my dad, [because] we didn’t have anything to eat.’’

The third-oldest brother went to high school and won a college scholarship; the second oldest, inspired, finished high school at night and went on to college himself.

“When I came to MIT as a professor, he was a grad student at MIT in urban planning,’’ Reif said. “He walked me to my office.’’

The key to the family’s success was his late father, he said.

“He was very keen that education was very important,’’ Reif said. “Hopefully, wherever he is, he’s very happy.’’

Reif’s own commitment to making education accessible, particularly to those in the developing world, has informed his championing of MITx, which two weeks ago morphed into edX, a collaboration with Harvard University.

Earlier this month, the chairman of MIT’s presidential search committee, James Champy, listed MITx - along with the capital campaign and the university’s partnership with the Russian government to create a research university in the city of Skolkovo - as one of three priorities on which the new president would need to act quickly.

Reif said the capital campaign would take precedence, because MITx is already underway with its own leadership and because the Skolkovo project will be the domain of a new provost.

He also intends to move forward with MIT’s 2030 initiative, a 20-year campus expansion plan. Some faculty believe the plan could lead MIT to lease space to corporations that would be better used for academic purposes, but Reif said their fears were unwarranted.

“If the faculty don’t have all the information, they will assume or imagine that we are exploiting commercial interests and trading academic space,’’ he said. “I would like them to be aware of it in great detail. That controversy will go away.’’

He made the last commitment literal this year, serving as a freshman adviser. His rapport with students was evident Wednesday, when a reporter from the campus newspaper asked how he would remain accessible.

Hockfield, 61, was the school’s first female president, as well as the first life scientist to lead it. She has retained a professorship in brain science during her presidency and intends to remain on MIT’s faculty.

“I am enormously pleased by [Reif’s] election, knowing he will serve the institute as president with devotion, insight, and compassion,’’ she said in a statement.

Many on campus had predicted the new leader would be one of their own, although the university had not chosen an insider president since 1980.

Reif was not only an internal candidate but a familiar face to the MIT board’s executive committee, which makes the final decision on whom to nominate for the presidency. As provost, he regularly attends committee meetings.

Yet he said he was among those shocked in February by Hockfield’s decision to step down. He had coyly suggested that he would not mind replacing her.