Yo, ho, ho and a bottle of Ipswich rum 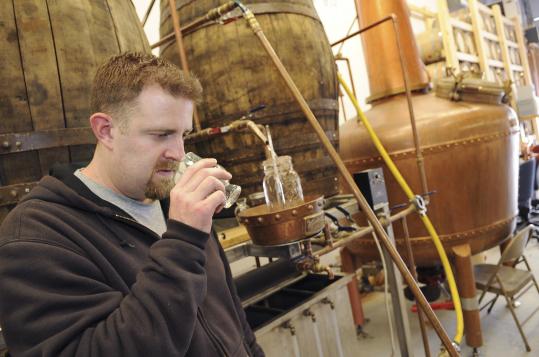 Owner Mathew Perry sniffs a sample of the rum made at Turkey Shore Distilleries in Ipswich. (Lisa Poole for the Boston Globe)
By Joel Brown Globe Correspondent / May 17, 2012
Text size – +

IPSWICH — Beginning in 1770, John Heard's rum distillery operated on what is now called Turkey Shore Road here. Barrels of West Indies molasses for the still were unloaded at a wharf on the Ipswich River, behind a house across the street.

Two centuries later, Mathew Perry grew up in that same house on the corner of Turkey Shore Road and Poplar Street and eventually became a history teacher. He was a fan of Mount Gay Rum, but that was the extent of his connection to the distilling trade, until New England's thriving locavore food and beverage scene awakened his entrepreneurial urges.

“I said if I was ever going to leave teaching, it would have to be for something I felt equally passionate about,’’ Perry said recently. “What attracted me is that this was a business idea that combined several of my passions, both history and rum.’’

Now in a industrial park on Hayward Street, on the riverbank less than a mile upstream from the wharf site, Perry and his longtime friend Evan Parker, both 34, have brought the Ipswich rum trade back to life with Turkey Shore Distilleries.

“We really set out to try to resurrect the old New England style in rum, both in how they made it and a little bit on the flavor too,’’ said Perry. “We didn't want to get too close to that, because New England rums weren't exactly noted for their cognac-like flavors.’’

Grade A domestic molasses, yeast, and water bubble away at 90 degrees in four 500-gallon, open-top fermenters. Each fermenter is named for one of the owners of the original distillery: John Heard, William Story Jr., George Washington Heard, and Augustin Heard, the latter two John's sons.

There's another batch cooking in the 250-gallon copper pot still nearby, and yet more rum already bottled and waiting for labeling on a workbench.

The gleaning must have worked. They won three medals at the American Distilling Institute's Craft Distilling Conference in Louisville in April. Old Ipswich Tavern Style Rum won a Gold Medal for Best of Class Rum and the Gold Medal for Amber Rum, and the Old Ipswich White Cap Rum won a Bronze Medal for the Clear Rum. (Their North Shore neighbors at Ryan and Wood Distillery in Gloucester won a Silver Medal in Amber Rum for Folly Cove Rum.)

They are not resting on their laurels, though. The two are experimenting with small-batch seasonal rum. Their first, out this month, is Old Ipswich Greenhead Spiced Rum, flavored with green tea, lemongrass, and mint, which they say gives it “a refreshing bite.’’

Perry lived in Newburyport for a decade before moving back to Ipswich in 2010, the same year he left his teaching job at Pingree School in South Hamilton to devote himself to the business. Perry said the Old Ipswich name was inspired by the Old Newburyport rum sold by the Caldwell's distillery, which operated in that town for many years.

Perry is owner of the distillery, having invested or raised the several hundred thousand dollars in start-up costs. That included more than $120,000 for the custom-made still from Vendome Copper and Brass Works in Louisville, fermenters, and other equipment.

Parker grew up on Turkey Shore Road too, and Perry drew him into the project over a few Ipswich Ales at a bar in Newburyport. (Mercury Brewing, which makes Ipswich Ale, is their industrial park neighbor.)

As Turkey Shore's master distiller — the “master’’ part makes him cackle — Parker is the firm's sole employee, aside from occasional part-timers. He's done much of the research and study, including a distilling class at the Siebel Institute of Technology, a well-known brewing school in Chicago. He's also the one who can fix things, Perry notes.

Not much of a hard liquor drinker, Parker had a career in coastal zone management and is still trying to get a clam farm going in nearby waters.

“The rum thing was just kind of a fluke, a fluke that worked,’’ Parker says. “When one of your best friends says ‘Hey, you wanna make rum?’ You really don't have the option of saying no.”

Either one of them can dilate on the nuances of aging their Tavern Style in new oak barrels charred on the inside by the maker, instead of the typical used bourbon barrels. They chose 15-gallon barrels for the six-to-eight-month aging process, smaller than the standard 53-gallon size, thus increasing wood exposure for more flavor and color.

In the modern era, there are some new challenges. They can't let the decorative wax seal drip down the neck of freshly capped bottles of Tavern Style, Perry said, lest they infringe upon the trademark of a certain premium whiskey brand and earn themselves a cease-and-desist letter.

That's by no means the most unusual problem, either. The first time they had 2,200 gallons of molasses delivered to the tank in the corner, a PVC pipe on the tank let go, and they had “our own little molasses flood,’’ Perry notes with a sheepish smile. “To add insult to injury, they heat it up to about 120 degrees to make it easier to flow, so 120-degree molasses is flying across our floor.’’ Only about 35 gallons spilled, but they learned their lesson.

There were about 160 rum distilleries in New England at the industry's peak in the late 18th century, they say, but the industry is not much remembered now. The Turkey Shore guys are improving their profile by popping up at events like the Rum, Rations and Revolution dinners at Historic New England's Spencer-Peirce-Little Farm in Newbury July 6-7.

“They make a fabulous product, and rum is very much a part of the history of this area,’’ said Bethany Groff, regional manager for Historic New England.

In 1790, there were 10 distilleries making rum in Newburyport alone, Groff said, and various period documents showed that the average man put away quite a bit of it. “It was part of everyday life and part of their celebrations.’’

The first case went out the door at Turkey Shore last summer, and their 80-proof rums are now available in stores around the North Shore and in Boston, priced in the low-to-mid-$20s. They've started a Barrel Buying Club in which members have rum aged in their own personal five-gallon barrel before bottling. For somewhere around $750, members get more than two dozen 750 ml bottles of their rum as well as the empty barrel. Demand is already strong.

For more information, visit www.turkeyshoredistilleries.com. Joel Brown can be reached at jbnbpt@gmail.com