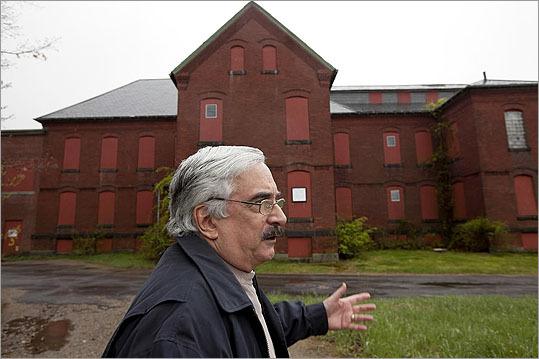 (Yoon S. Byun/Globe Staff) Abutter Bill Massaro fears harm to the water supply and to the recreational use of the Charles River.
By David Abel Globe Staff / May 15, 2012
Text size – +

MEDFIELD - Near a sleepy bend in the Charles River, below the moldering wards of the shuttered Medfield State Hospital, there are broad fields that are anything but bucolic.

Buried beneath the tall grass and shrubs across more than 200 acres rests the detritus from another era: ash filled with arsenic, lead, and cadmium from a former coal-fired power plant on the property, along with demolition debris filled with asbestos and decomposing medical supplies such as syringes, bandages, catheters, and intravenous solution bags.

Residents’ concerns about the refuse from the former mental hospital, which closed after more than a century in 2003, have spiked in recent weeks as state officials said they were pushing ahead with a plan that would remove only about 15 percent of an estimated 75,000 tons of toxic waste in a landfill adjacent to the river.

Residents fear that unless more of the dangerous waste is removed, it could leach into ground water and taint the river, drinking-water wells, and aquifers in the area.

“We’re talking about a hundred years of waste, and the state, which created this mess, is refusing to clean it up,’’ said Bill Massaro, an activist whose property abuts the hospital in the heart of this town of 12,000 people. “If they get their way, we essentially will have a permanent toxic landfill affecting recreational uses of the river, the water supply, and downstream communities. It needs to come out.’’

Massaro and other residents argue that state officials are trying to cut their losses by going with a $4 million cleanup plan, the least expensive of four options they have considered.

But state officials say that the planned cleanup will remove the risk to the public and the environment and that spending more would provide no greater safety.

The state’s plan to remove 10,000 tons of the waste and wrap the rest in what state officials describe as an impermeable lining that would prevent any material from escaping into the surrounding wetlands. They would then cover the landfill in 3 feet of soil and install monitoring devices.

Carole Cornelison - commissioner of the state Division of Capital Asset Management, which oversees the state’s buildings and properties - said scientists and public health officials have assured her that the plan would protect the environment.

“Our concern is to ensure that there are no health risks,’’ said Cornelison. “That’s how we came up with this solution.’’

Town officials and residents have urged the state to spend at least twice what they have proposed on a plan that would remove all toxic waste from the area.

Cornelison pointed out that the state has spent nearly $27 million over the past three decades cleaning up other closed state hospitals and that it has cleared all the toxic waste only at the Boston State Hospital site, because it was in a residential area designated for redevelopment.

She said the state spent less on cleanups at former hospitals in Danvers, Foxborough, Lakeville, and Rutland Heights, and her agency has already spent about $5 million cleaning up parts of Medfield State Hospital.

“There’s no greater gain or minimization of health risks if we remove additional fill,’’ Cornelison said, noting that the plan was engineered to contain the waste even in the event of the kind of torrential storm that strikes once in 100 years.

But as her agency prepares to implement the first part of its plan this summer, which would involve dredging contaminated sediment from the bed of the Charles River, environmental advocates and lawmakers have urged Cornelison to reconsider. They say that much of the land on the campus will probably be sold to the town, which could use it to build housing or parks.

In a letter sent to Governor Deval Patrick last month, Senator James E. Timilty, who represents the area, wrote that he was outraged about the agency’s plan, which he called an “incomplete cleanup; inconsistent with the stated goals of the administration to move toward a greener future.’’

He suggested that the plan violated the Global Warming Solutions Act of 2008, which called for preservation of healthy flood plains to help protect against rising water levels in coming decades. He said failure to remove all waste would have implications for communities down-river. “Nothing short of the complete removal of all toxic material will guarantee the safety of current and future residents,’’ he wrote.

Timilty also took issue with the state’s plan to declare the land a “limited use’’ area, meaning it can be used only for designated purposes.

“Labeling town land in close proximity to residences and water resources as limited use, with the potential for severe environmental problems 10, 20, or even 50 years down the road, is simply unacceptable,’’ he wrote.

Officials at the state Department of Environmental Protection declined to comment, citing appeals to the agency about the plan, which some groups have said violates laws protecting wetlands. They are hoping environmental officials will require a broader cleanup.

One of those groups, the Charles River Watershed Association, has raised concerns about the effects on fish and other life in the river without a full cleanup. They note that some of the landfill already sits in ground water, which flows into the river.

“We’ve always been concerned about this site, because of its proximity to the river,’’ said Margaret Van Deusen, deputy director of the watershed association. Cleanup costs would be recouped by sale of the property. “We shouldn’t guess about what will happen in the future. We should just take it all out.’’

Medfield residents voted at Town Meeting last month to appropriate money to prepare for potential litigation against the state.

But for now Michael Sullivan, the town administrator, is hoping Medfield and state officials can settle their differences through mediation.

“We’re looking for a solution to get this cleaned up properly,’’ he said.