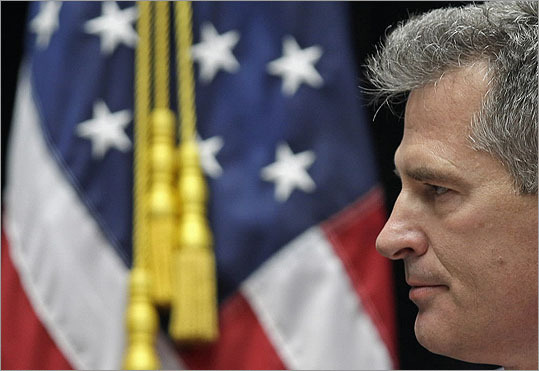 US Senator Scott Brown has turned questions over Democrat Elizabeth Warren’s claims of Native American ancestry into a key strategy in his bid to retain his Senate seat.

Almost every day for more than two weeks, the Brown campaign or a Republican surrogate has highlighted the latest bit of news to emerge on the subject, often citing articles on conservative websites in a bid to coax more coverage from the mainstream news media. Warren’s failure to offer a full and concise answer on what role her ancestry has played in her professional career has left an opening that has allowed the questions to linger.

On Monday, Brown’s campaign manager, Jim Barnett, held a telephone briefing with reporters, offering a near exhaustive catalogue of details about the issue and demanding anew that Warren release personnel records from her jobs at Harvard University and the University of Pennsylvania law schools.

Warren refused again Monday to make her Harvard and UPenn personnel records available, as did the universities themselves.

Warren, a national leader in the field of bankruptcy law, has repeatedly pointed to statements from deans and recruiting faculty at the schools where she has worked that said her heritage was not a factor in her hiring.

In a CNN interview Monday, she called the issue a diversion.

“It’s now the case that people have gone over my college records, my law school records, every job I’ve ever had to see that I got my work,’’ she said. “I got my jobs because I do my work. I work hard. I’ve been a good teacher.’’

Warren continues to say that she is proud of her Native American heritage, but she has relied on family lore without documenting that claim, and more recent attempts by others to do so have not been substantiated.

Two weeks ago, the New England Historic Genealogical Society cited secondary evidence that Warren could be 1/32 Native American, but no primary document has been found.

For Brown, the strategy offers several benefits. It allows the senator to shift the subject when he faces potential criticism, and it puts Warren on the defensive when the first-time candidate is still trying to introduce her message of economic populism to voters.

Beyond that, any impression that Warren gamed the system could hurt her with conservative Democrats and other swing voters who are suspicious of affirmative action programs. But the intense focus on Warren’s family history and credentials could also backfire on Brown if voters decide he is getting too negative or dodging issues.

The story over Warren’s claim to being part Native American first emerged in the Boston Herald on the day that Brown and Warren released their tax returns. Those returns showed that Brown had earned $1 million through the sale of his memoir, which contrasted with the pickup-driving image he had crafted for himself.

Last week, a half-hour after Brown cast a tough vote to help Republicans block a Democratic proposal that would have kept student loan rates from rising, Brown himself offered his strongest comments about the Native American controversy yet, calling on Warren to release her personnel records and challenging her integrity.

The central question in the controversy has been to what extent, if any, Warren claimed Native American ancestry to further her career.

It is clear that Harvard and UPenn publicly billed her as a Native American. Harvard Law School officials made the claim in the student newspaper, the Crimson, in the 1990s, several years after she was hired, when the law school was under fire for a lack of diversity on its faculty.

Penn made the claim retroactively, in a 2005 “Minority Equity Report’’ identifying her as a minority who won a faculty teaching award in 1994. The award was open to all faculty, regardless of minority status.

There is no proof Warren called herself a minority when applying for jobs at the law schools, and hiring faculty at each have denied it was a factor. But without personnel records, the Globe and other news organizations have not been able to verify whether, how, when, or why she may have told school officials that she had Native American ancestry.

Yet she did list herself from 1986 through 1995 as a minority in the Association of American Law Schools desk book, which is commonly consulted by hiring deans.

Warren said she did so to meet others like herself, but the directory does not specify which minority she or other self-identifying faculty members belong to, so there would have been little opportunity for other law school teachers to recognize her as a Native American based on the listing.

Portions of Warren’s applications to college and law school reviewed by the Globe do not list her as a Native American or minority, and on a personnel document at the University of Texas, where she taught on and off from 1981 through 1991, she listed herself as white.

The question of Warren’s genealogy has not been conclusively answered, and Warren herself has reiterated that she relied only on family stories.

The Cherokee Tribe has said it encourages those making claims to do the genealogical research, given the number of specious claims made.

It does not appear that Warren or her family would qualify for tribe citizenship, given that her ancestors have not been found on the Dawes Rolls, a census of the “Five Civilized Tribes’’ compiled in the late 19th and early 20th centuries.

But the society does not have the original document, and the Globe has been unable to contact the author of the claim, Lynda Smith, who cited it in a family newsletter.

On Monday, the conservative website Breitbart.com reported that Smith could not locate the original document and was not standing by the claim.

Tom Champoux, marketing director for the New England society, said his group has stopped looking into the issue, not wishing to be enmeshed further in political controversy.

“There appears to be no primary source document indicating O.C. Sarah Smith was a Cherokee,’’ Champoux said reacting to the Breitbart.com story Monday. “We didn’t claim we had it. We claimed that we found a reference from family research that indicated they believed their family was Cherokee.’’

The issue may remain unsettled, given the inexact nature of genealogical research and the question of whether ancestors listed themselves accurately, given the risk Native Americans faced.